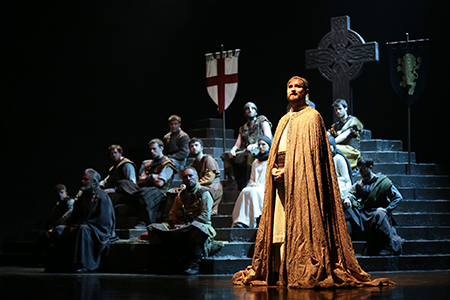 Ewan Donald as Malcolm in Dunsinane. Photo by Jason Ma.

Is it just me or has the theatrical culture of the English-speaking world gone into a terminal decline? I would think that perception a sign of my advancing age but for the occasional straws in the wind to suggest that I am not entirely alone. Janice Turner in The Times of London, for example, writes that she recently walked out of Paul Thomas Anderson’s movie Inherent Vice.

After 30 minutes of letting bonged-out hippy ramblings “wash over” me, I was imploring my husband to leave. We lasted an hour. And as we burst into the foyer, enjoying that same exquisite pleasure as when escaping a boring dinner or almost any play, two others followed us. “What the hell was that about?” we all cried.

Can you guess what words in that passage leap out at me? I’ll tell you. “Almost any play.” Yes! I can barely remember the last play that I didn’t at least want to walk out of at intermission. And I have now walked out of the last two I have seen at the Shakespeare Theatre in Washington. A few nights ago it was Dunsinane by David Greig, presented by the National Theatre of Scotland. To be sure, my dissatisfaction wasn’t entirely the fault of the play, which wasn’t quite so bad as I had expected—not that that is saying very much for it. It was pretty bad, at least what I could hear of it. A combination of the uncompromising Scottish accents (why is making the actors speak comprehensibly to American ears the only bit of pandering to the audience’s ignorance that the producers won’t do?) and poor enunciation and acoustics meant that I found only about half of the play understandable.

And what I could understand made precious little sense of any but the most literal kind. The big idea of Mr. Greig’s play, in case you don’t know, is to bill itself as a sequel to Macbeth, with the occupying English army in Scotland of the 11th century seen as analogous to the Americans and British in Iraq or Afghanistan in the 21st. Shakespeare, as is usual these days in the theatre company that bears his name along with that of the Father of Our Country, is nothing but a convenient peg on which to hang contemporary and remarkably facile political commentary of a predictably left-wing sort—which is thus meant to take on a certain lustre from its association with his brand-name drama.

Yet the analogy itself is a potentially interesting one. The historian Niall Ferguson made it in connection with last year’s Scottish independence referendum. Writing of a period half a millennium after that in which the play is set, he pointed out that,

for most of the early modern period, the Scots kingdom was Europe’s Afghanistan. In the Highlands and the Hebrides, feudal warlords ruled over an utterly impoverished populace in conditions of lawlessness and internecine clan conflict. In the Lowlands, religious zealots who fantasised about a Calvinist theocracy — government by the godly Elect — prohibited dancing, drinking and drama. John Knox and his ilk were the Taliban of the Reformation. Witches were burnt in large numbers in Scotland, not in England.

Yet this intriguing comparison, and anything it might have had to teach us about what we and the world are up against in the war on Islamic terrorism, conveys nothing to the playwright or the players or the Shakespeare Theatre audience apart from the smug self-satisfaction of knowing that they would have been smarter than to get involved in some other country’s civil war.

Mind you, we’re talking here about something very much better than the worst of the politicized theatre (or movies) spawned by the wars of the last decade. Siward, the English general played by Darrell D’Silva, is much more sympathetically portrayed than might have been expected: a good man with the best of motives in overthrowing the tyrant Macbeth. He tries to do his best for the subject Scots, but he is in way over his head and subject to continual manipulation by the duplicitous Malcolm (Ewan Donald), his own corrupt lieutanant Egham (Alex Mann) and the beautiful but ruthless and treacherous Lady Macbeth—here called Gruach and played by Siobhan Redmond, who created the role in 2010—imagined as having survived her husband’s defeat to treat with Malcolm and the English as a rival power center among the feuding Highland warlords. Siward’s good intentions are to the play’s credit, but they are made to seem hopelessly naive and turn him into nothing more worthy of our respect than the fools he is being compared to.

But what propelled me out the door at the first opportunity wasn’t even that there was exactly zero effort to imagine what people of a thousand years ago would have looked or thought or talked like—assuming they could speak comprehensible contemporary English. Like the fights, which were all stylized and made no pretense of realism, the characters were not even supposed to look like the world they were ostensibly representing. But no, what bothered me about seeing my contemporaries pretending so unconvincingly to be people of the Middle Ages is that they seemed to have been doing it as a positive reproof to the audience’s now very much latent desire to see something other than themselves reflected back at them. “Don’t go there!” Mr. Greig’s puppets appear to me to be saying. “You won’t find anything in the vast graveyard of the past to compare in interest to the mugs you already know all too well and whom we are once again putting on stage for you to feel superior to.” Maybe, unlike them, I’m just tired of feeling superior.

James Bowman is a Resident Scholar at the Ethics and Public Policy Center and the author of Honor, A History (Encounter).