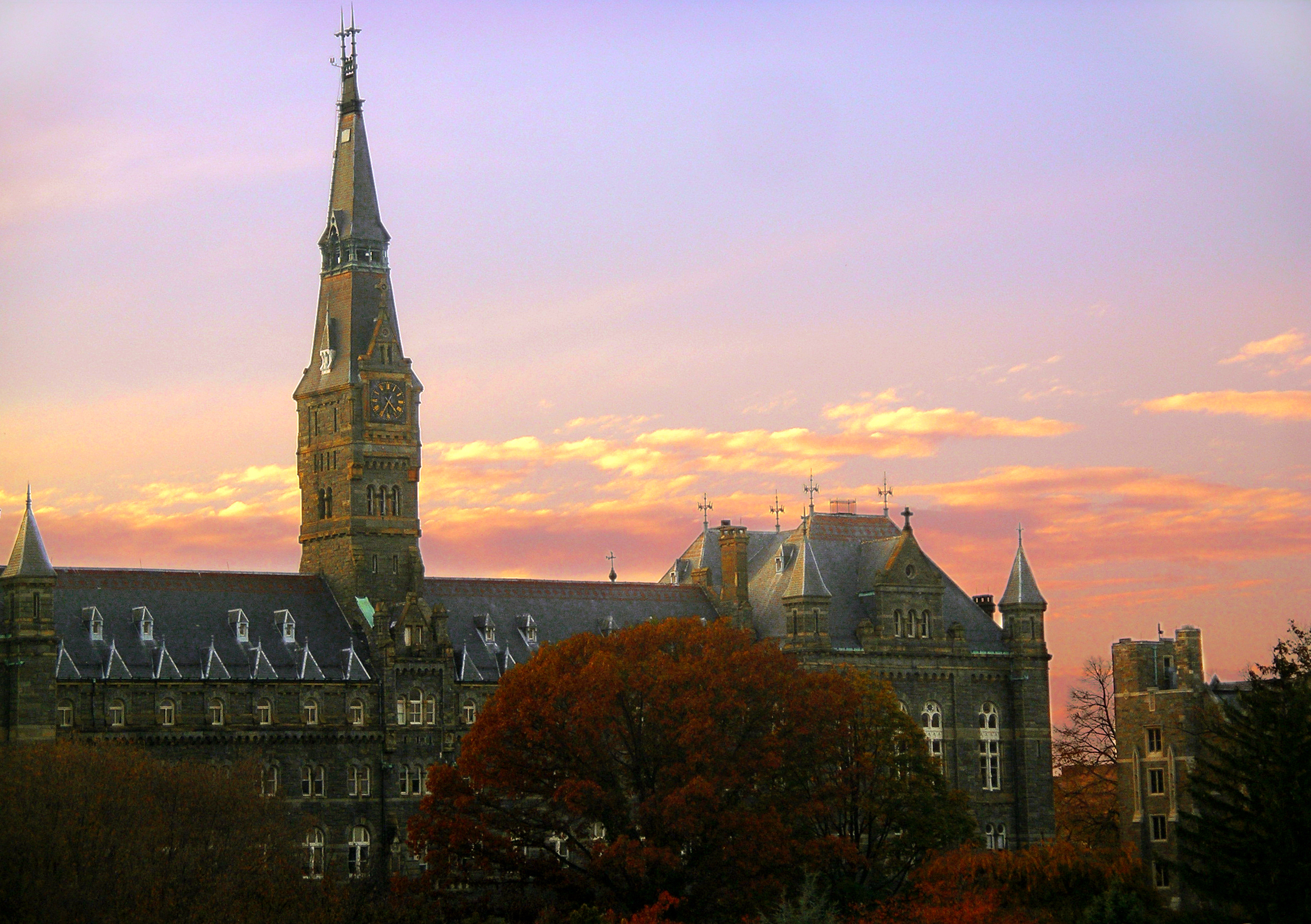 It is all well and good to break down the barriers that previously have made so many private institutions in this country little more than ghettos. But unless this is accompanied by comparable efforts to insure that these institutions are able to retain something of their historic identity, the resulting “pluralism” is almost certain to end up functioning as a Trojan horse for homogenization. Even as we congratulate ourselves on our openness to diversity, we shall, in fact, be becoming more and more alike.

To understand the revolutionary transformation of Georgetown University, it’s helpful to go back to a single day: April 14, 2009. On that day President Barack Obama gave a speech on economics in Gaston Hall, a grand auditorium that is considered a crown jewel in Georgetown’s campus.  Gaston is a 750-seat space with a backdrop that displays the coat of arms of several Jesuit universities as well as allegorical religious paintings by the Jesuit interior designer Francis Shroen (1857-1924).

On the day of President Obama’s speech, however, there was something missing from the backdrop. Prior to arrival at Georgetown, the White House had made a demand. On a wooden archway behind the dais on the stage at Gaston, there was a gold monogram of three letters: IHS. The letters are an ancient Jesuit symbol for Jesus Christ, and those letters would have to be covered before the president spoke. The university complied, covering the monogram with what appeared to be a piece of black plywood. For good measure, they erected a blue backdrop on the stage and set up a row of flags. Georgetown, the oldest Jesuit and Catholic university in America, would not be allowed to display any religious imagery during the speech.

Many Catholics were outraged at the covering of the monogram, charging that political correctness was forcing Georgetown to hide its identity from the public. In fact, what Georgetown had done during President Obama’s visit was to reveal its true face. When one considers the state of Georgetown today, it becomes apparent that the front of an institution steeped in a Jesuit tradition of faith and learning is the real Potemkin façade the university is offering to the world. Over the past forty years a revolution has taken place at Georgetown, a revolution that has now succeeded. I have worked at Georgetown on two different occasions and in two different eras, and can say with certainty that the storied, Jesuit-founded school is no more religious today than the University of the District of Columbia. And Georgetown’s academic standards may be lower.

The image of Georgetown’s Catholic facade hiding the reality of a school driven by secularism and political correctness was evoked in June 2013 by William Peter Blatty, a Georgetown class of 1950 alumnus. Calling themselves the Father King Society, Blatty and 2,000 petitioners issued a 200-page indictment of Georgetown, charging that the school could no longer claim to be a Catholic university. Its failings are many and detailed: there is Georgetown’s 2012 invitation of Health and Human Services Secretary Kathleen Sebelius to speak at a graduation ceremony (Sebelius is one of the architects of Obamacare, which pushed Catholic organizations to provide contraception and abortifacient drugs to their employees through health insurance); there’s Sandra Fluke, the Georgetown student who lobbied on Capitol Hill for government-funded contraception; there is the university’s annual production of The Vagina Monologues, the controversial play that graphically celebrates female anatomy; there is the vocal and visible gay lobby at Georgetown, GU Pride, whose leader declared to The New York Times that “every month is a good month to be gay at Georgetown.”

When considering this list—which is only partial—it’s almost funny to hear critics of Georgetown complain that the university is violating Ex Corde Ecclesia, John Paul II’s 1990 Apostolic constitution that called Catholic universities to meet certain guidelines in order to remain Catholic schools in good standing. By the 1990s Georgetown had moved so far beyond Catholicism—or regressed, you might say—that there was even a debate on campus about whether to keep crucifixes, the central symbol of Roman Catholicism, in the classrooms. Fr. Thomas Reese, who was then the editor of the Jesuit magazine America, put it this way: “What we’re trying to deal with at a Catholic university is how you intelligently dialogue from Christian tradition with a pluralistic culture.” Yet as is most often the case, “pluralism” came to mean not a healthy dialogue and respect for all points of view, but the suppression of orthodoxy. Today’s Georgetown is not the traditional Catholic school founded by an archbishop in the late 1700s, but it is also not the more liberal Jesuit institution of the mid to late twentieth century. Georgetown today is a radical institution.

This is important to understand, because Georgetown’s defenders tend to cite a tradition that goes back to the school's founding, or smile with self-assurance and observe that Jesuits have always been independent-thinking intellectuals with a degree of liberalism. Indeed, the official response to Blatty from Georgetown was that “our Catholic and Jesuit identity on campus has never been stronger. Academically, we remain committed to the Catholic intellectual tradition.” Georgetown spokesperson Rachel Pugh then added that Georgetown students are required to take two courses in philosophy and theology. What Pugh didn’t note is what those classes are: in philosophy, after a required introductory ethics course, choices include “Philosophy of Sport,” “Gender & Justice, “Philosophy and Star Trek,” and “Global Warming.” In theology, one of the required classes is either “The Problem of God” or “Introduction to Biblical Literature.” Choices for the second include “Yoga and Meditation,”  “Feminist Theology,” and “Catholics go to the Movies: Questioning Catholicism from the King of Kings to the Da Vinci Code.”

What has happened to Georgetown in the last few decades is not an evolution still tied to the history of the school, but a rupture. Making vague homages to Georgetown’s rich Catholic history when confronted with the reality of modern Georgetown is a piece of legerdemain that the university’s public relations office has perfected over the years. Considering Georgetown’s history, it’s hard to blame them. The school was founded in 1789 by John Carroll, America’s first archbishop. Carroll wanted to found an academy for the shaping of boys, and while there would be no religious requirement for admission, one of his goals was clearly to encourage young men to become priests. The curriculum was based on the Jesuit Ratio Studiorum, or program of studies, and included Latin, Greek, reading, writing, arithmetic, and French. “We trust in God,” Carroll said in 1787, “that many youths [from the academy] will be called to the service of the Church.” Crucial to this effort was the American Revolution, which promised Catholics the religious freedom that had been lacking not only in England but the New World; as a boy in the mid-1700s Carroll had been forced to study in France because of the anti-Catholicism in America. After the Revolution, Carroll celebrated that “the fullest & largest system of toleration is adopted in almost all the American states: publick protection & encouragement are extended alike to all denominations & [Roman Catholics] are members of Congress, assemblies, & hold civil and military posts as well as others.”

Georgetown grew in stature under the leadership of Patrick Healy, a Jesuit who was president of the school from 1873 to 1882 and raised the resources to build Healy Hall, the Flemish Romanesque-style building that is Georgetown’s major tourist attraction. The School of Foreign Service was founded in 1919 by Edmund Walsh, another Jesuit. Walsh would go to Russia in 1922 to help provide famine relief, and he returned a dedicated anticommunist who wrote influential books and advised Presidents.

In the later part of the 20th century Georgetown became home to Jesuits who were more liberal—that is to say, Jesuits who may have pushed the envelope a bit with theological speculation, but who had no wish to overturn Western culture and the Catholic Church itself. Such a man was Father Thomas King, after whom William Blatty named the Father King Society. Fr. King (1929-2009) wrote books on Sartre, Thomas Merton, and the somewhat controversial Jesuit Teilhard de Chardin, and opposed war and the death penalty. He was pro-life, founding the Georgetown group Faculty of Life, and initiated an 11:15 pm nightly Mass at Georgetown’s Dahlgren Chapel.

Yet starting in the 1970s, Georgetown, along with other universities, became infected with political correctness. A key figure was James Slevin, who founded the Georgetown University Writing Center and served three terms as the English department chairman. Under Slevin, the English department began teaching deconstruction, colonialism, queer theory, comic books, and other faddish literary courses. His views are summarized in a paper he once delivered, “Educating for Justice”:

I was hired into Georgetown’s English department in the mid-1990s, and in 1996 department chairman Slevin decided to change the requirements for majors. Whereas English majors were once required to study Shakespeare, Milton, and Chaucer, works from Old Middle English, the Renaissance, and the Restoration, now they would have three categories to choose from: Literature and Literary Theory; Studies in Culture and Performance; and Studies in Writing: Rhetoric, Genre, and Form. Literature and Literary Theory was the last bastion of traditional literature; Studies in Writing explored deconstructionism and other academic fads; and Studies in Culture and Performance will, as one professor told a campus newspaper, "include the study of anything that aids in the construction or representation of cultural values like race, gender, and sexuality."  One afternoon in the English department, I watched as one professor told another, “the revolution is going to start right here.” When I expressed doubt about a conference on “Queering the Middle Ages,” I was told that eventually I would be won “to the devil’s side.”

Georgetown today is not traditional Georgetown, or even the more liberal Georgetown of the twentieth-century Jesuits. Today Georgetown is a university run by left-wing radicals, teaching some very bright and friendly students who oftentimes don’t know what hit them. Seduced by the brochures featuring glossy pictures of brick archways and Jesuits in deep thought, students arrive only to wind up in the classroom of someone like James Slevin. I left Georgetown in 1996—I had wanted to be an English professor, but had no desire to queer the Middle Ages or anything else—and didn’t return until 2008, when I was hired to teach a summer course in journalism. In the time that had passed, the requirements for the English major at the university had been deconstructed even further.

But perhaps most heartbreaking is the loss of Georgetown’s spiritual charism, as William Blatty’s indictment shows. In the eighteenth century, John Carroll came to the town of Georgetown with the dream of building a university that would educate young people in the Ratio Studiorum, but also, and perhaps more importantly, allow Carroll, in a country that was still largely anti-Catholic, the freedom to fully express and practice his faith. Traditional Catholics, classical scholars, and even students with basic common sense today find themselves as outnumbered as Archbishop Carroll was over two hundred years ago, but the forces opposing today’s faithful are on the campus itself. In 2001 students started Jesuit Heritage Week, an annual festival whose putative purpose is to celebrate Georgetown’s noble pedigree. You’ll find on the website announcements for programs about Jesuits and education, Jesuits and Opera, and a volleyball game with members of the Society of Jesus, but unlisted are the events which comprise the majority of the events: Protestant services, Muslim outreach, a speech by pro-abortion politician Mark Shriver, and, of course, “Jesuits and LGTB: Being Queer at Georgetown.” When constructing their Potemkin village, the radicals at America’s oldest Catholic university know which façade to show.

Mark Judge is an author living in Washington, D.C.