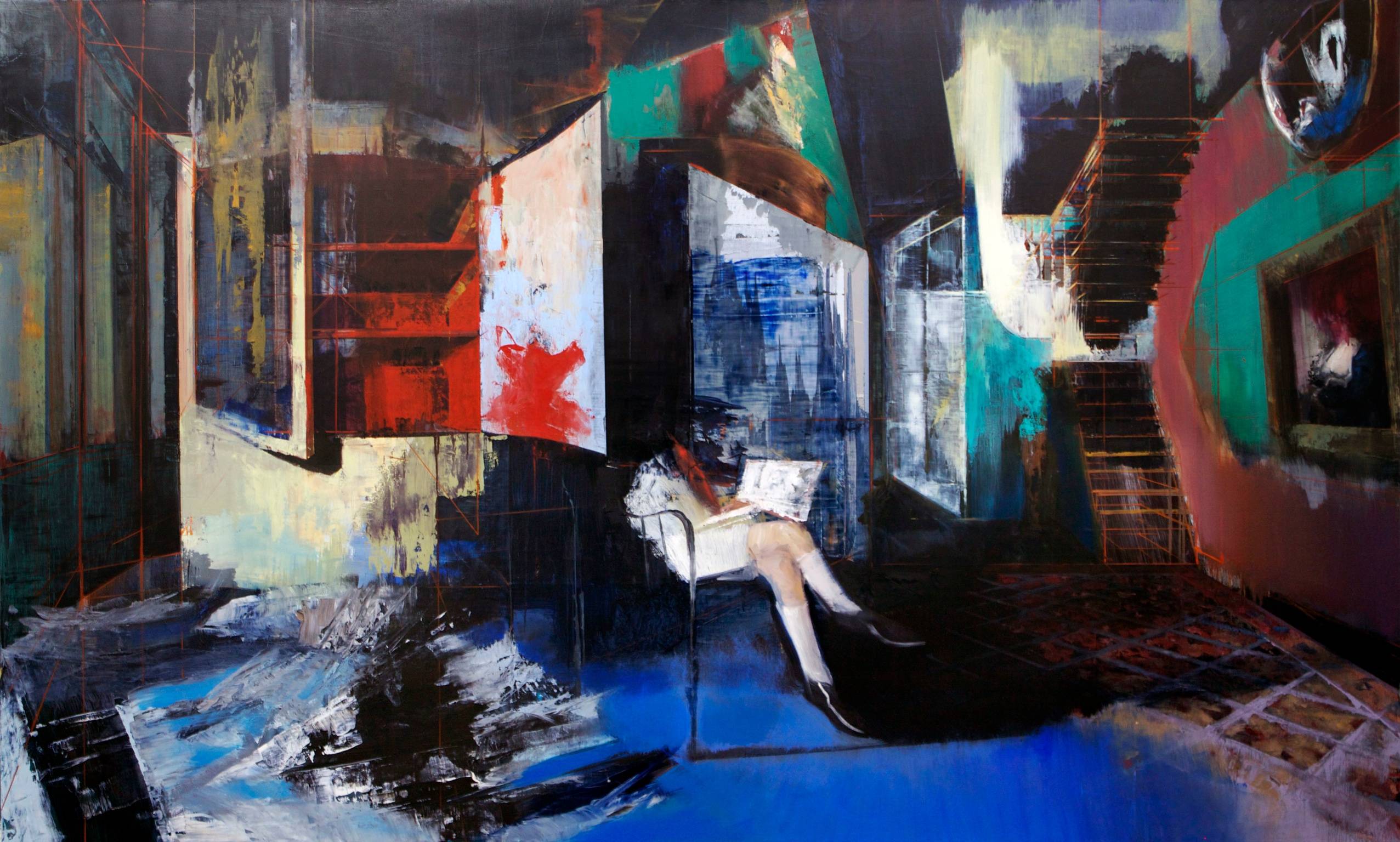 Last week at the Armory Show, the art fair whose sixteenth edition closed on Sunday, there was one question on everyone’s lips: What other fairs would you be attending? And while art collectors, critics, and connoisseurs of every variety descended on Piers 92 and 94 in Midtown to peruse the offerings of more than 200 galleries from 29 different countries, there was an undeniable mood in the air that the trip was just as much a required duty as it was an enjoyable outing. The Armory’s role as a name brand fair is both the cause and a symptom of this attitude: As it has grown in size year after year, attracting bigger galleries, better-known artists, and more lavish checkbooks, a variety of smaller fairs have popped up to try and capitalize on the sudden surge in art-world interest. And so after my Hajj to the Armory Show, I spent the rest of the weekend looking at some of the smaller fairs to see what—if anything—they had to offer. 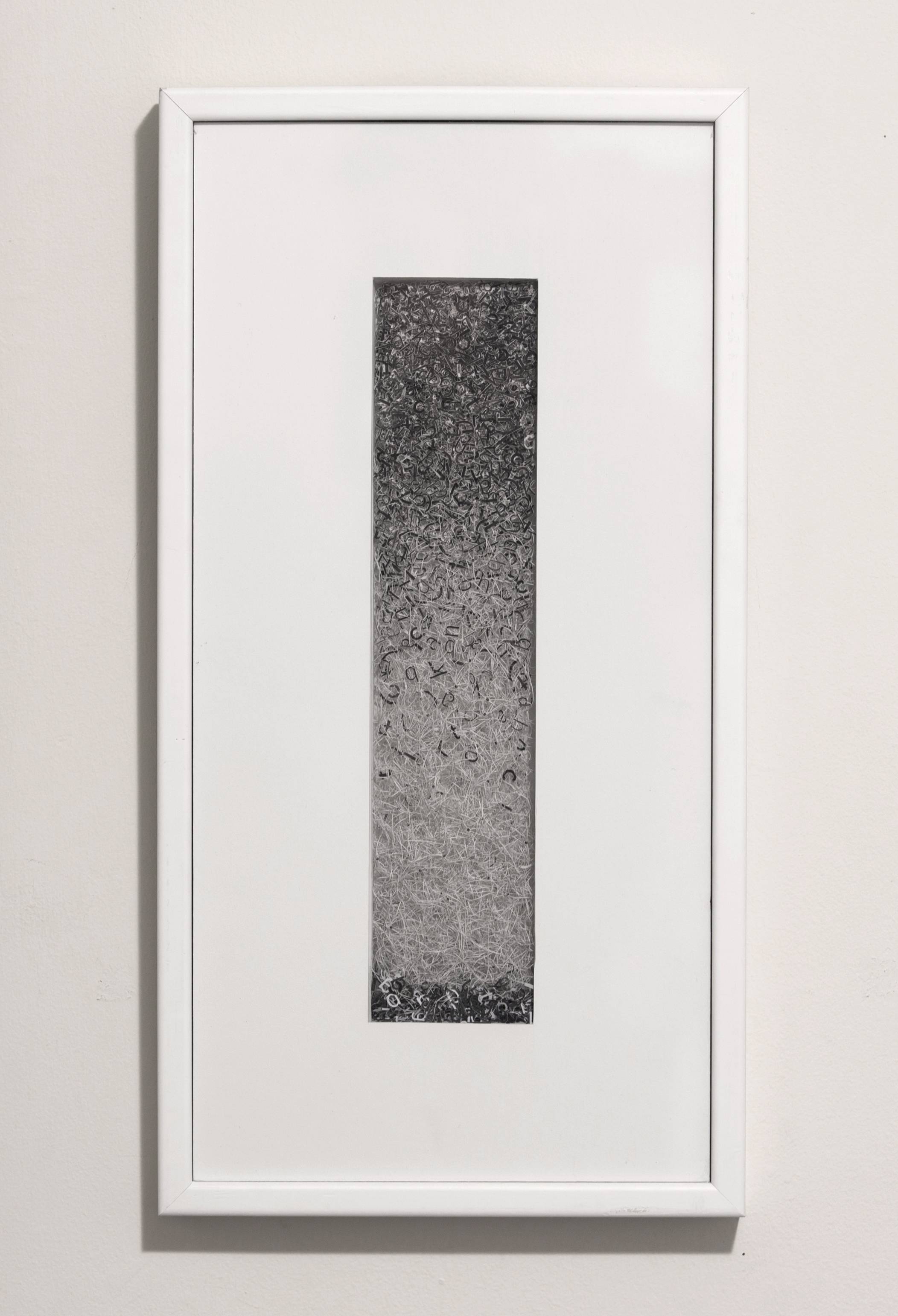 The answer, unsurprisingly, is that the smaller fairs are a mixed bag—much like the Armory Show itself. My first stop was the Fountain Art Fair, founded in 2006 and this year hosted in the 69th Regiment Armory (the site of the 1913 Armory Show, no relation to the behemoth hosted on the piers). Though on the surface the show looked like a Ken Kesey wet dream—DayGlo paint, faux street art, and pseudo-subversive pieces galore—a little searching uncovered some hidden gems. Especially impressive was the work of Soyeon Shin, a young artist from Seoul who collects receipts from her daily life, carefully slices them into a variety of figures, and constructs complexly layered sculptures behind glass. Abstract landscapes and minimalist color studies are the result of this painstaking work. These are backed with a creeping element of surrealism that springs both from Shin’s smart construction—in one piece black letters tangle with thin white shreds, simultaneously falling up and down, pushing themselves to the foreground while burying down into the bed of hair-like strands—and the obsessive nature of the project: collecting and saving scraps of paper, carefully cutting strip after strip, assembling the fragile pieces. 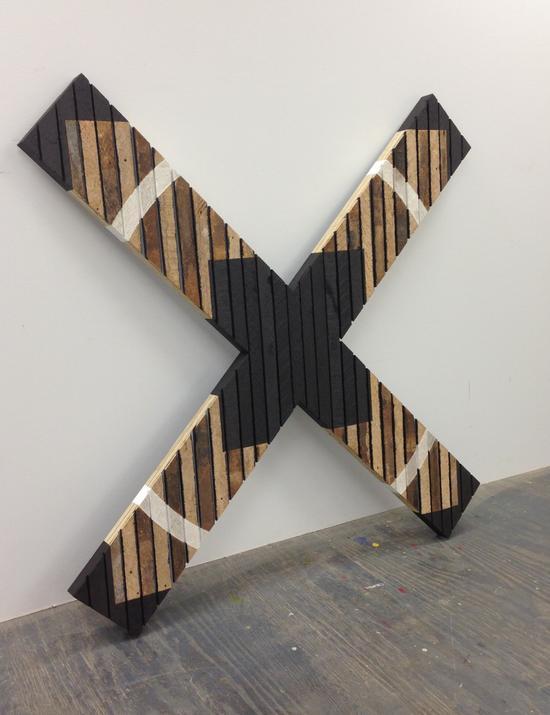 Stephan Fowlkes, a Brooklyn-based artist, also creates his art through a process of deconstruction and reassembly. Using reclaimed plaster, laths, and lumber from demolished buildings in Brooklyn’s Williamsburg neighborhood, he makes geometric wall sculptures whose precise measurements contrast nicely with each piece’s rustic finish—a combination that belies Fowlkes’s experience as both lumberjack and woodworking instructor.  Playing with fragments of circles and squares, the series on display here is a smart exploration in excising the superfluous, giving fragments of both shapes and buildings new lives as pieces of their former selves. 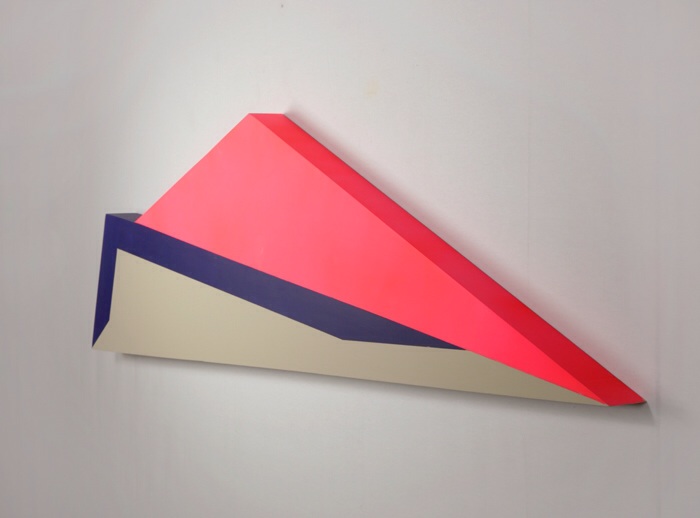 A few other eye-catchers: the worn and weather-stained "Rustagrams" of Jeffrey Allen Price, the dynamic and colorful polygons of Zin Helena Song, and the crowded (in a good way) multi-artist booth of the Hullaballoo Collective. 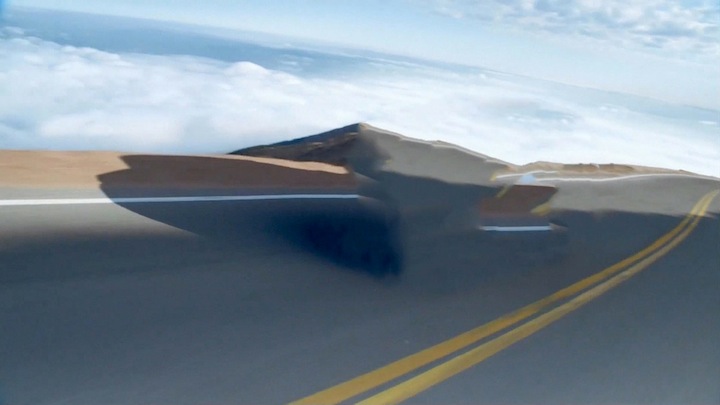 Moving Image, a fair dedicated to video art, felt largely uninspired. Between films of looping TV test cards and a woman washing a dead, beached whale, Zach Nader’soptional features shown was the most interesting piece in the show. Collecting footage from a variety of car commercials, Nader removes the cars from the frames. The result is a ghostly glitch of suggestion, tearing through cityscapes and coasting into suburban driveways. Nader clips away at the instantly recognizable—here Fowlkes’s simple geometries have been replaced by run-of-the-mill camera shots and predictable settings—challenging the viewer to think about advertising and commercialism in ways that dime-a-dozen DayGlo stencils simply can’t. 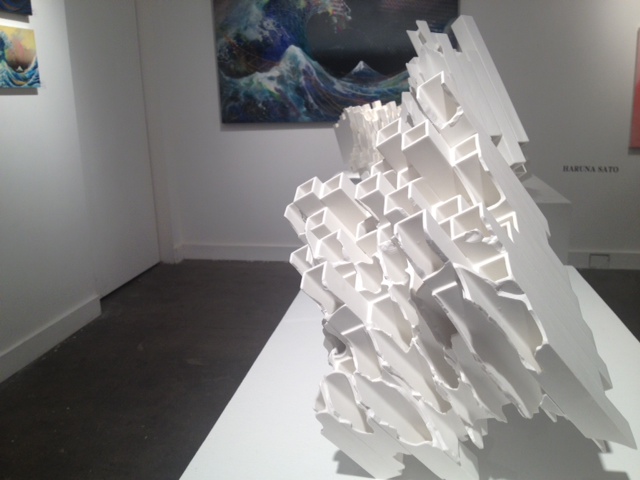 New City Art Fair, a small show dedicated to Japanese art, featured work ranging from mid-century avant-garde pieces by the Gutai group to chintzy, cartoonish paintings done in the past few months. Varied though the selection was, work by Kouzo Takeuchi certainly stood out. A ceramicist who comes from a traditional background, Takeuchi first crafts square tubes and attaches them in grids of varying dimensions. After firing the piece, he then carefully takes a hammer to it, methodically chipping away as if he were working in marble. Doing so creates powerful sculptures that juxtapose light and dark, interior and exterior, pristine and flawed. When lit correctly, the honeycomb-like assemblies come alive with alternating elevations and curious negative spaces, creating futuristic structures and post-apocalyptic ruins in miniature.

Around the corner from New City was Independent, a fair that apparently aimed to showcase the stunning range of media in which mediocrity can be rendered. The Box, a gallery out of Los Angeles, offered a slight reprieve in a series of Robert Mallary’s works on canvas. Building up multiple layers of sand, paint, and resin, the earthy grays and browns are rich in texture, providing an interesting duality that swings between raw-natural and hard-industrial. Still, it says something about the fair that its most impressive offerings came from an artist who has been dead since 1997. 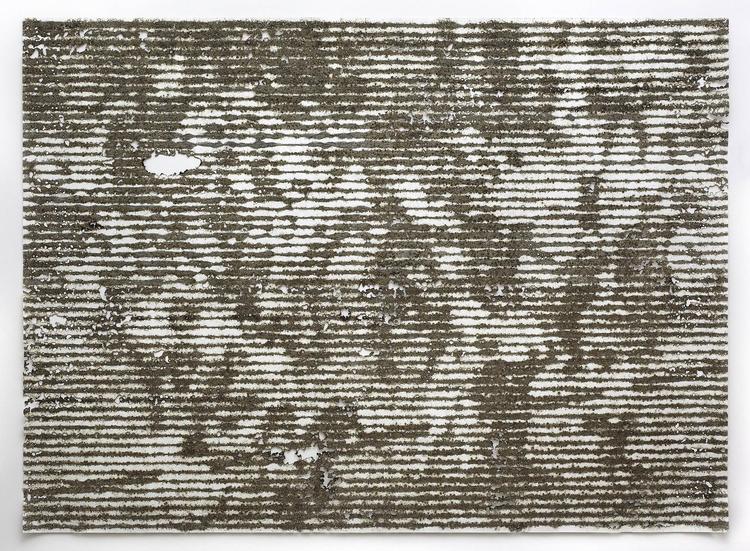 The Buenos Aires gallery Ignacio Liprandi showed two pieces by Tomás Espina—both from 2012— inspired by news reports on television and in print, and made by igniting gunpowder on canvas and paper. While the method and subject matter are far from original, the execution was spotless. Espina’s decade-long experience with this medium shows: His works are powerful but controlled—probably a good goal to have in mind if you’re working with low-level explosives. 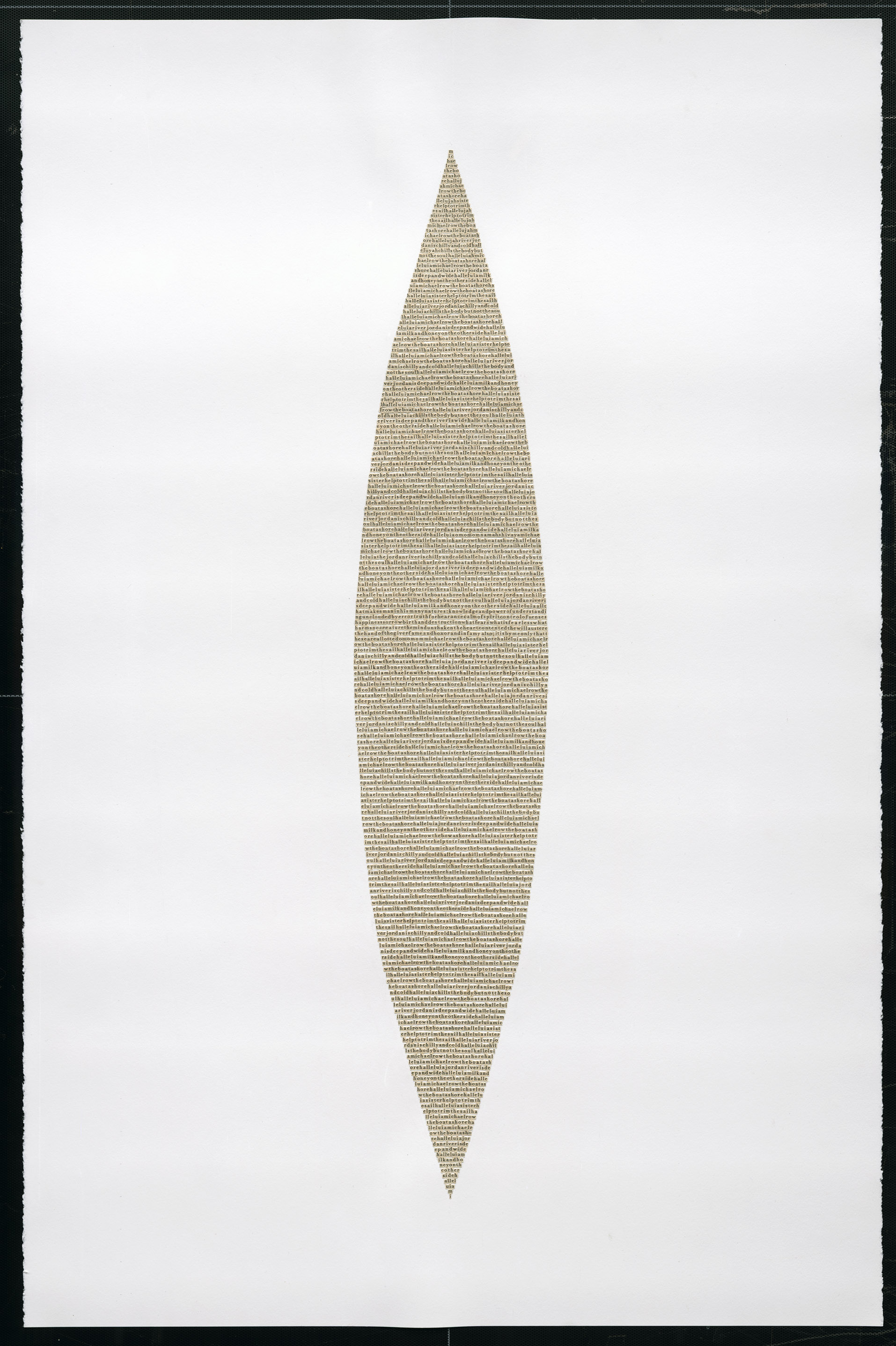 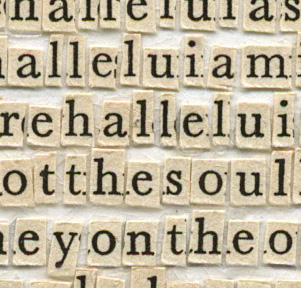 Of all the shows I saw this week, Volta was far and away the best—and, yes, that includes both the Armory Show and the Whitney Biennial. The Bushwick studios—especially those from the 56 Bogart building—were out in force. SLAG featured the hauntingly mysterious figurative abstractions of Bushwick-based Tim Kent;Robert Henry Contemporary showcased the mesmerizing ink on paper drawings of Robert Lansden; and Studio10 returned with more of Meg Hitchcock’s spiritual cut-and-paste pieces. These and other shows will be covered more in James Panero’s April article reviewing the fairs. (You can read his initial thoughts over on his blog.) 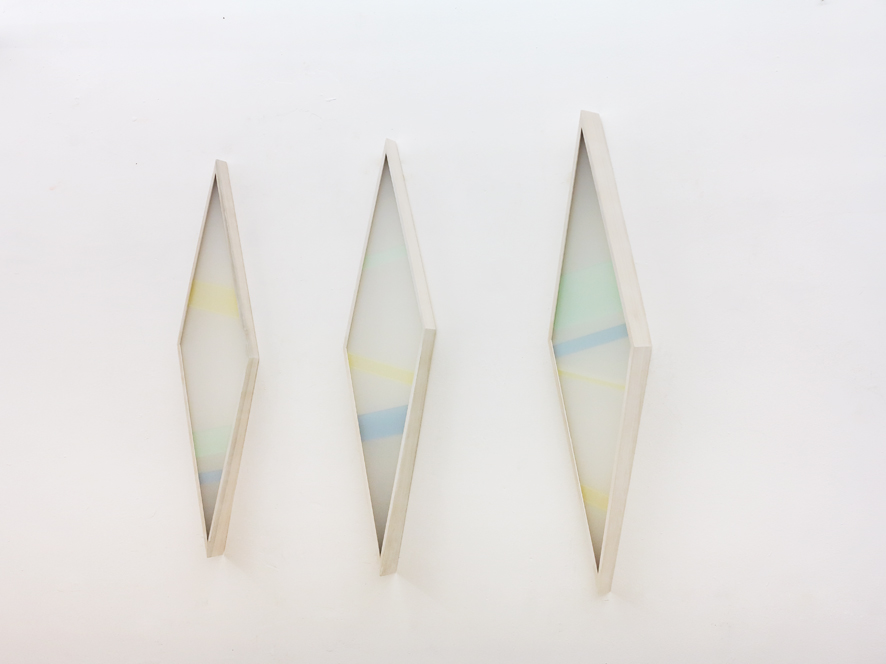 Moving beyond Brooklyn, Pablo’s Birthday, in the Lower East Side, and Patrick Heide Contemporary Art, in London, shared a booth, curating a fantastic selection of works by Henrik Eiben and Pius Fox, respectively. Eiben’s wall-mounted sculptures bring together a variety of materials—from leather and acrylic glass to popsicle sticks and watercolors—to create dramatic experiments in light and dimension. Ell, a series of three diamonds, and Gilead, a pair of large, rectangular pieces, are built of acrylic glass set at varying positions that react to changing light. Thanks to differences in the angles at which the glass is set, the pieces are hung, and the light positioned, different colors are produced by the same piece of glass. The result of this unique construction is a faux-kinetic piece that is rich in luminescence and is an ever-changing treat for the eye. The abstractions of Pius Fox are, in a word, sublime. Worked quickly and with very little pre-planning, these paintings are incredibly energetic. Their surfaces are rich in detail, the speed of Fox’s work leaving a readable puzzle that tells the story of each piece’s creation. A young artist (born in 1983, he graduated from the University of the Arts in Berlin in 2010), he is brimming with talent and holds great promise for the future. 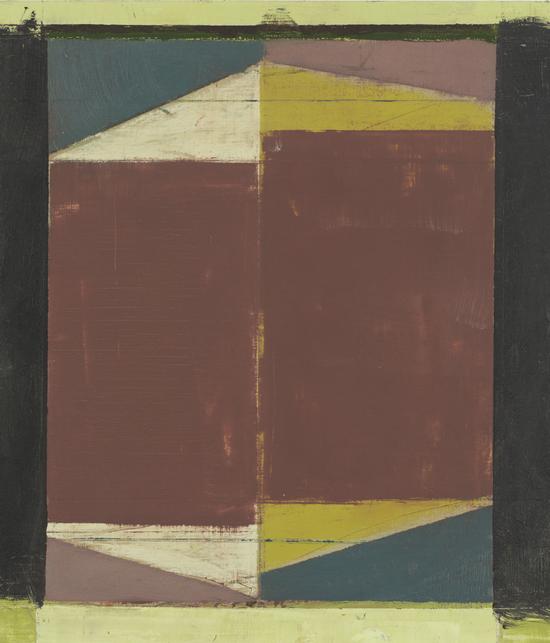 My last stop at the fairs was SPRING/BREAK. If you can imagine walking around a middle school art show where all the pieces by kids who won awards or honorable mentions had been sent to the state-level competition, and those remaining works were then updated to be showcased as thesis projects for B-level art school diplomas, then you have some idea of what SPRING/BREAK was like.  But as I was waiting in line to pet someone’s chest hair and make a wish (Sean Fader, Wishing Pelt), I realized that SPRING/BREAK captures the true essence of Armory week: You’ll see some good work; you’ll see some bad work; but the fairs are always entertaining.