This week: Africa, Beethoven, and the Barrio

Nonfiction: A Tourist in Africa, by Evelyn Waugh (Penguin): The weather is a boring topic, but who can be faulted for commenting on New York’s recent stretch? In the span of thirty-six hours we’ve gone from negative temperatures, to cold slush, to a warmish rain. It’s enough to make one think of sunnier climes. With that in mind, I’ve been reading Evelyn Waugh’s riotous A Tourist in Africa, which details a late-1950s jaunt down and around the African continent. On the first page, Waugh “declare[s] smugly that I am at the time of my life when I have to winter abroad, but in truth I reached that age thirty years ago.” As a man of similar age to the young-fogey Waugh, I can’t help but agree. —BR

Art: “The Illusive Eye,” at El Museo del Barrio (Through May 21): Few people now remember William Seitz's 1965 MOMA show “The Responsive Eye,” but at the time it was one of the original blockbuster museum exhibitions, making Optical Art the style of the moment. It was also far from inclusive. Optical art was truly an international movement, with remarkable work spanning from Latin America through India and Iran. Yet “The Responsive Eye” looked mainly to Anglo-American artists. Now, with hindsight, we can look back to the Optical Art movements of Latin America with fresh eyes thanks to “The Illusive Eye,” an exhibition on view at El Museo del Barrio through May 21. For more, I spoke with the art critic Juana Libedinsky in Argentina's La Nacion about the new and important perspective "The Illusive Eye" brings to Op. —JP 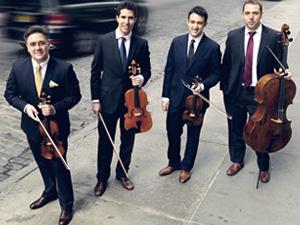 Music:Beethoven String Quartets: Part V (February 19): The Chamber Music Society of Lincoln Center is in the middle of an epic Beethoven binge, presenting all sixteen of the string quartets over a series of six concerts by leading ensembles. They are giving the series chronologically—those who went early on may have found the first three of the Opus 18 quartets a little light, but latecomers benefit in the form of concentrated doses of Beethoven’s late genius. This Friday will see perhaps the most intense program in the series, as the Escher Quartet performs Op. 130 and 132 alongside the “Grosse Fuge.” Originally intended as the final movement of the Op. 130 quartet, the Grosse Fuge is a devastating and taxing piece, embodying the radical spirit that Beethoven found in his waning years. —ECS

From the archive: Reading Africa in Waugh, by James Panero: On what Evelyn Waugh can tell us about contemporary Africa.

From our latest issue: Rhodes not taken: On the recent controversy over the Rhodes Scholarship.