This week: Wiman, watercolor, the western frontier & more from the world of culture.

Frontier Rebels: The Fight for Independence in the American West, 1765–1776, by Patrick Spero (W. W. Norton): Though conventional histories of the American Revolution tend to focus on unrest in major cities along the eastern seaboard, the stability of the colonies’ western frontier was of primary concern to British officials in the years leading up to the first skirmishes of 1775. On paper, France had officially ceded the strategically crucial Ohio River Valley to Britain at the conclusion of the Seven Years’ War. But on the ground, Native American populations would continue to control the region for decades to come. This reality proved unfavorable to colonists (many of them veterans who had been promised western land grants) who continued to push westward, against the wishes of British authorities, and to aggravate Indian tensions. In a scholarly but readable volume, Patrick Spero (the librarian of the American Philosophical Society and a former professor at Williams College) chronicles the history of “the Black Boys,” a band of such autonomous frontiersmen whose 1765 uprising marked one of the first examples of outright rebellion by American colonials. —AS

“Graham Nickson: Cumulus, Monumental Trees and Transient Skies,” at the New York Studio School (through October 21): Graham Nickson has dedicated his career to working against the grain. As a painter and watercolorist, he has sought to capture the unabashed beauty of land and sky, observing the gloam from points near and far. As the dean of the New York Studio School, he has challenged a generation of artists to find their own bliss through the studio craft of modern painting and sculpture. Both accomplishments are now on view in the school’s gallery in an exhibition that marks his thirtieth anniversary at the institution. Curated by The New Criterion’s own critic Karen Wilkin and Rachel Rickert of NYSS, the show draws on the collection of the late collector William Louis-Dreyfus with forty works of clouds, trees, and skies, all clustered in series. —JP 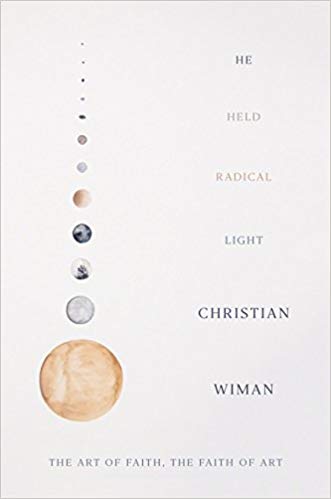 He Held Radical Light: The Art of Faith, the Faith of Art, by Christian Wiman (Farrar, Straus and Giroux): The poet and New Criterion contributor Christian Wiman is a former editor of Poetry magazine, a current professor at the Yale Divinity School, a cancer survivor, and an estimable essayist, to boot. In his most recent essay collection, he expands on the question that has dominated his career: how does the search for beauty in art align with the quest for truth in religion? In his last collection, My Bright Abyss, Wiman wrote of his struggles with faith during his bout with stomach cancer. In this new volume, he describes the ways that other artists—religious, non-religious, and those caught in between—respond when faced with the reality of death. Wiman has a gift for apt quotation: in perceptive readings of and anecdotes about poets such as Mary Oliver, A. R. Ammons, and Donald Hall (these two and their wives were particularly close friends; Wiman’s tribute to the late U.S. poet laureate and his luncheon buddy is deeply moving), he introduces readers to contemporaries whose writings explore the theme of death and divinity, life and the afterlife. Look for a review of He Held Radical Light in an upcoming issue of The New Criterion. —HN

“Classical New York: Discovering Greece and Rome in Gotham,” at the General Society Library (September 27): When we think of Greek and Roman influences on American architecture, our minds naturally turn to Washington, D.C., modeled deliberately on the classical world. But New York has its own host of buildings that looked to Greece and Rome for ornament and design, from grand edifices like Stanford White’s domed Gould Memorial Library at Bronx Community College to more workaday structures like the many townhouses around the city with Greek key motifs adorning their façades. On September 27 three of the authors—including Francis Morrone—who contributed to Classical New York: Discovering Greece and Rome in Gotham, out now from Fordham University Press, will speak on the topic at the General Society Library. —BR

From the current issue: “Hussar of the brush,” by Dominic Green. On “Delacroix” at the Louvre, Museum, Paris, and the Metropolitan Museum of Art, New York.