This week: Nationalists, “locationists,” Audubon enthusiasts & more from the world of culture. 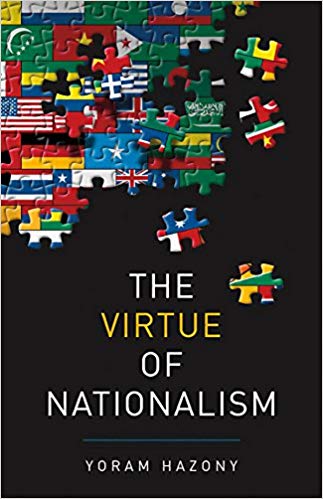 The Virtue of Nationalism, by Yoram Hazony (Basic Books): Yoram Hazony is a professor of political science in Jerusalem. His new book, The Virtue of Nationalism, is one of the most important books on one of the most important controversies of our time. Is nationalism a good thing? Or is it an atavistic form of political organization destined to be superseded by the globalist project? If you are an EU bureaucrat, or even if you are merely a Western intellectual of “progressive” disposition, then you instinctively opt for globalism. Hazony, with deep but lightly worn erudition and quiet but enlivening passion, shows that globalism is really the new face of an ancient evil, which he identifies as imperialism, and that allegiance to the nation-state is the best hope for perpetuating individual liberty and the institutions of limited government upon which it depends. Today, the nation-state, that territorially based network of filiation bound together through shared history, custom, law, and language, is under greater siege than at any time since the dissolution of the Roman Empire. The rise of proselytizing Islam may be the greatest external threat to Western civilization since 1571, when the Battle of Lepanto checked the incursion of what we used to call the paynim foe into Europe. But in the end, perhaps the greater threat to the West lies not in its external enemies, no matter how hostile or numerous, but in its inner uncertainty—an uncertainty that is all too often celebrated as an especially enlightened form of subtlety and sophistication—about who we are. Hazony shows that the nation-state stands as a bedrock of Western identity—a foundation we can abandon, whether through the embrace of trans-national judicial or bureaucratic fiat (a.k.a. globalism) or the slow-drip method of unchaperoned immigration, only at our extreme peril. This is a wise as well as a learned book. Read it. —RK

“Rackstraw Downes: Painting & Drawings,” at Betty Cuningham Gallery (through October 14): Rackstraw Downes is not so much a “realist” as he is a “locationist.” Beyond his remarkable technique, which seems to capture every detail in a wide-angle view, what may be most significant is what we don’t see in his work: a painter sharing a personal perspective on what is often a mundane scene: of overgrown fences, air-conditioning ductwork, or dusty riverbeds. Opening this week at Betty Cuningham Gallery and continuing through October 14, “Rackstraw Downes: Paintings & Drawings” features eleven new paintings and related drawings of various perspectives observed from specific places, including an intersection near Manhattan’s Columbia Presbyterian Hospital and the artist’s own loft space. On Saturday, September 22, from 4 to 6 p.m., the gallery will screen a film about the artist by Rima Yamazaki, along with a book signing of Downes’s  Nature and Art are Physical: Writings on Art, 1967–2008, published in 2014 by Richard Milazzo of Edgewise Press. A conversation between the filmmaker, the publisher, and the artist will follow. —JP

The O. Henry Prize Stories 2018, edited by Laura Furman (Anchor): The author of the famous short story “The Gift of the Magi” gave his name to another gift: the O. Henry Awards, which were established in 1918, eight years after their namesake’s death. Each year, three jurors select twenty stories from the thousands published in literary magazines—from the behemoth New Yorker to the venerable Southern Review to the upstart Zoetrope. A sampling of the 2018 winners is available for free online: Mark Jude Poirier’s “How We Eat” requires a strong stomach for its description of motherhood gone wrong during a thrift-shopping excursion, and in “Stop ’n’ Go”, Michael Parker distills a World War II veteran’s struggle with war and peace into two potent paragraphs. The strongest story by far comes first in the collection: Jo Ann Beard’s “The Tomb of Wrestling” begins, “She struck her attacker in the head with a shovel, a small one that she normally kept in the trunk of her car for moving things off the highway.” Beard packs an entire life into the swing of that shovel. To read on, you’ll have to buy the book. —HN

“Contemporary Murals of Audubon Birds,” walking tour (September 9): Proof of the enduring nature of John James Audubon’s Birds of America (1827–38) might be found in a sale this summer at Christie’s, where what was the Duke of Portland’s four-volume set of the works went for $9,650,000. Another point of proof might be the contemporary murals of Audubon birds found throughout Washington Heights. This Sunday, Mary-Beth Shine will lead a tour of the mural sites, starting out from Audubon’s grave at Trinity Church Cemetery (155th Street and Broadway). —BR

From the archive: “To see is to believe: the life & films of Jean Renoir,” by John Simon (October 1994). On the definitive biography of the filmmaker, Jean Renoir: Projections of Paradise.

From the current issue: “A sketch of democracy,” by Aleksandr Solzhenitsyn. An excerpt from Solzhenitsyn’s forthcoming memoir, Between Two Millstones.

From the editors: “Seeing her worldview in a circle,” by James Panero (The Wall Street Journal). A review of Howardena Pindell’s “What Remains to Be Seen” at the Virginia Museum of Fine Arts.