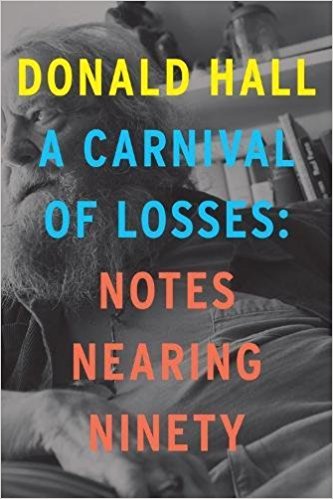 A Carnival of Losses: Notes Nearing Ninety, by Donald Hall (Houghton Mifflin Harcourt): Donald Hall, the U.S. poet laureate and New Criterion contributor, died on June 23 at his home in Wilmot, New Hampshire, after a long life of writing what he called “the poetry of death.” But A Carnival of Losses is not merely a “necromemoir”: Hall remembers a career full of poetry, biographies, plays, children’s books, and more. Hall’s fellow poet laureate Billy Collins considers him part of “the Frostian tradition of the plainspoken poet.” It is clear in Carnival that Hall played a major role in twentieth-century American poetry as both a writer and friend of writers; the second section of the memoirconsists of fifty pages’ worth of humorous remembrances of giants in the field, including Geoffrey Hill, Theodore Roethke, and John Ashbery. But the figure who looms largest in Carnival is Hall’s wife, the poet Jane Kenyon, who died in 1995. Hall cultivates, in his charming and carefully wrought prose, a whole garden of memories of Kenyon, his ancestral home at Eagle Pond Farm, and his living family members. Carnival is, in the end, a joyful book precisely for all its sorrow, because, as Hall writes, “there is no north that is not also south.” The poet Ernest Hilbert, who reviewed Essays After Eighty, Hall’s previous memoir about aging, will also write an appreciation of Hall for our September issue. —HN

“Mythologies,” at Steven Harvey Fine Art Projects (through July 28): This month at the Lower East Side’s Steven Harvey Fine Art Projects, an exhibition brings together a small group of artists who have labored to convey individual voices through the stories shared by us all. Among the motley crew represented in “Mythologies,” which runs through July 28, are Rosemarie Beck, Sandro Chia, Susanna Coffey, Angela Dufresne, Lester Johnson, June Leaf, Malcolm Morley, Jan Müller, Stuart Shils, Kyle Staver, Clintel Steed, and Bob Thompson. Earlier pieces in the exhibition, made in an era that was hostile to painters who infused their works with literary elements, are a 1956 altarpiece-like oil pentaptych by Müller titled Faust and Thompson’s 1966 pen and pencil study for a reinterpretation of Titian’s Venus and Adonis—the last painting that he worked on before his untimely death. But works painted just this year also approach these timeless myths with hopes of transcending the fleeting present. In Staver’s Ascension (2018), for instance, the celestial magic of the painting’s subject is matched only by the ethereal glow of its internal, backlit color. On Tuesday at 6 p.m., Staver, Steed, and Coffey will discuss the exhibition’s theme as it relates to the more strictly aesthetic pursuits of their own painting. —AS

“Rose Hill in Manhattan: What Became of the old Watts Farm?” walking tour presented by the Municipal Art Society of New York (July 11): Ask a New Yorker what neighborhood lies between Twenty-third Street and Thirty-second, Madison Avenue and Third, and any answer might be forthcoming. Is it Kips Bay? No, that’s to the east. Murray Hill? Technically north of the zone in question. Flatiron? Southwest, dear reader. Gramercy? Due south. NoMad? Northwest, and a neologism to boot. Turns out this neighborhood does have a name, but very few know it—Rose Hill, after a 130-acre farm dating to the eighteenth century owned by a man named John Watts. Today, the neighborhood is a jumble of offices, low-rise apartments, the Baruch College campus, and the odd architectural gem, such as the Hunt & Hunt–designed Sixty-ninth Regiment Armory with its imposing mansard roof. This Wednesday evening, the Municipal Art Society presents a walking tour of the obscure area, led by Laurence Frommer. —BR

“A Bite-Sized History of France: Gastronomic Tales of Revolution, War, and Enlightenment” book launch at Albertine Bookstore (July 10): We all know the story of Marie Antoinette’s remark about the cake, and the bloody aftermath that followed shortly thereafter. Regardless of its historical accuracy, the tale reveals a truth: the French take their food seriously. In fact, as Stéphane Hénaut and Jeni Mitchell show in their new book, A Bite-Sized History of France, it’s been like this since the Roman era. Studying France through its cuisine reveals an enormous amount about its political, military, and social history. On Tuesday, the authors will be at Albertine to discuss the intimate relationship between monarchy, war, and empire and Roquefort, absinthe, and crêpes.—RH

From the archive: “The real Caravaggio?” by Marco Grassi (October 2012). On the artist, his techniques, and the question of originality.

From the current issue:“The second-worst poet in English,” by Anthony Daniels. On Cumberland Clark, the bard of Bournemouth.