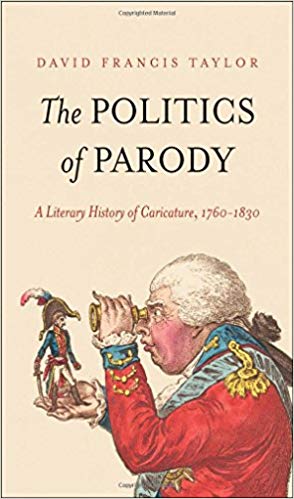 The Politics of Parody: A Literary History of Caricature, 1760–1830, by David Francis Taylor (Yale University Press): In the golden age of caricature, British publishers printed comical woodcuts of politicians, historical figures, and other notables in newspapers, pamphlets, books, and more. The common understanding of visual parody during this late-eighteenth-century publishing boom is that graphic satire served as a democratizing form, pandering to the masses with its colorful content. But David Francis Taylor argues that caricaturists cut more deeply as they responded to the concerns of the age in an allusive form accessible only to Britain’s better-educated citizens. Satirical illustrations of Shakespeare’s, Milton’s, and Swift’s works were not intended to popularize them, but instead to help literate Britons engage with debates about the Enlightenment, politics, religion, and all the great literature such turmoil inspires. —HN

“Summertime,” at Tibor de Nagy (through July 28) and “Elizabeth Enders: Waterlines” at Betty Cuningham Gallery (through August 3):  As we step into the sweltering heat of July and as art-world goings-on slow to an agonizing crawl, a number of galleries are putting the final touches on their 2017–18 seasons with greatest-hits-style group exhibitions. At Tibor de Nagy, one such show reads like an overview of that gallery’s redoubtable history. With mid-century heavyweights such as Jane Freilicher, Rudy Burckhardt, Louisa Matthíasdóttir, and Larry Rivers, as well as contemporary painters such as Trevor Winkfield and Susan Jane Walp, on view, the exhibition is representative of both the sheer artistic heft and the eclectic visual variety that Tibor de Nagy has brought to the New York scene since 1950. Next door on Rivington Street, Betty Cuningham Gallery is presenting the luminous seascape abstractions of Elizabeth Enders through August 3. In the oils and watercolors included in “Waterlines,” Enders plumbs the depths of her imagination and memory to produce poetical horizons and light-drenched fields of aqueous color. —AS

Art Deco in Manhattan’s East Fifties Walking Tour (July 10): It’s a quiet week for culture here in New York with the Fourth of July holiday bisecting the week. So our thoughts turn to the week after, when the cultural calendar fills up again. On July 10, Anthony W. Robins, an expert on Art Deco architecture, will lead a walking tour of the East Fifties, the site of some of New York’s most exuberantly deco buildings. From the imposing Waldorf hotel to the spiky General Electric building, Robins’s tour will encompass a host of New York landmarks, and some lesser-known structures, too. For more on Art Deco, read Peter Pennoyer’s “Cross & Cross: transforming New York,” an excerpt from a similarly named monograph, published in our April 2014 issue. —BR

“European Vacation: the Birth of the Grand Tour” at the Stephen A. Schwarzman Building of The New York Public Library (July 11): “T’other minute I was in Greece, gathering the bloom of Hymettus, but now I am landed in Flanders, smoked with tobacco, and half poisoned with garlic.” Thus a nineteen-year-old William Beckford wrote of his Grand Tour in 1780. Like Beckford, many young, well-to-do European men in the seventeenth and eighteenth centuries took an extended holiday around the continent, learning to fence in France, explore ruins in Rome, and charm foreign women wherever they were to be found. But how did these young men and their often large entourages know how to get around and what to see in these alien lands? Next week in the New York Public Library’s Stephen A. Schwarzman Building, Ian Fowler, the NYPL’s Geospatial Librarian and Map Curator, will examine some of the guides, books, and maps that helped these early tourists complete the Grand Tour. —RH 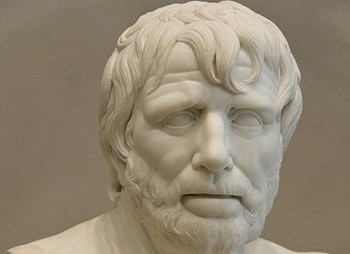 From the current issue: “Painting after postmodernism, III,” by Karen Wilkin. On “Painting After Postmodernism: Belgium–Italy–USA,” at the Reggia di Caserta, Caserta, Italy.

From our editors: “Shimmering black history brought to life,” by James Panero. James Panero reviews “Charles White: A Retrospective” at the Art Institute of Chicago for The Wall Street Journal.

Broadcast: “The killing of history: why relativism is wrong” (audio article), by Roger Kimball. On The Killing of History by Keith Windschuttle.