This week: Trains of the night, Mozart delight & more.

Night Trains: The Rise and Fall of the Sleeper, by Andrew Martin (Profile Books): There is something suspicious about the committed railway enthusiast—the man who times trains, knows the stock of the line he is on, and evinces fascination with the pitch of the seats in each carriage. Like any sort of zeal, it can be carried too far. I will never forget the time when—while standing on the platform at Denham Golf Club train station, in Buckinghamshire, golf clubs in hand following a round—a trainspotter appeared. After timing the express train to Paddington, he turned to me and said, “A golfer at Denham Golf Club, who would have thought? I thought you all drove Bentleys.” Andrew Martin is a railway enthusiast, though a particularly charming one. He has written histories of London’s tube and the golden age of British railway travel. His latest is Night Trains, a history of the sleeper train, once the height of glamour and now barely extant. Martin charts the fortunes of the famed overnight trains (The Orient Express, the French wagons-lits) and excavates littler-known routes such as the Norwegian line up to the Arctic circle, all while traveling these routes—or what’s left of them—himself. An able, chatty guide, Martin’s book is a worthy companion for your next journey, whatever the conveyance might be. —BR

2017 Alumni Association Invitational, New York Studio School, July 24–August 27: In 1964, Mercedes Matter, dissatisfied with the state of art education in America—namely, increasingly pervasive MFA programs and their concomitant uninterest in foundational studio skills—founded the New York Studio School of Drawing, Painting, and Sculpture, an atelier-style school that placed drawing at the center of each student’s practice. Though the school has since undergone administrative transitions and pedagogical evolutions, the NYSS remains a haven for draughtsmen, painters, and sculptors who prize form over talk, and has had a profound influence on art within and without New York. This week, the New York Studio School opens its 2017 Alumni Association Invitational, which places recent work by alumni of the school alongside a core group of the institution’s founding figures. Represented painters of this latter group include authorities such as Philip Pearlstein, Ruth Miller, Philip Guston, Milton Resnick, and Hans Hoffman. The exhibition not only presents thoughtful, serious work, but also serves as a benchmark of the institution’s progress: an indication of its present footprint on the contemporary scene as well as a reminder of its original objectives.—AS

Beethoven and Schubert, Mostly Mozart Festival Orchestra, Lincoln Center, July 28–29: The Mostly Mozart festival finally gets underway this week at Lincoln Center, offering a four-week oasis before the cultural season begins in earnest in September. The weekend program features Jeremy Denk, a supremely accomplished and intelligent pianist, playing Beethoven’s masterful Piano Concerto No. 4. He ought to be a perfect match for the piece, as intellectual as it is spirited. Also on the concert are Mozart’s Masonic Funeral Music in C Minor and Schubert’s spry Symphony No. 5. —ECS 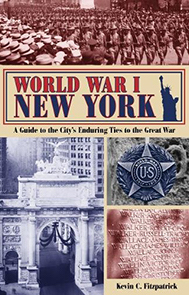 Book Talk: World War I New York, Kevin Fitzpatrick, New-York Historical Society, July 28: This summer, the New-York Historical Society has delivered a plethora of World War I programming in honor of the centennial anniversary of America’s involvement in the Great War. On May 26th, the N-YHS opened World War I Beyond the Trenches, an enlightening exhibition on the often-overlooked American artists who reacted through pictures to both the War’s historical significance and its unprecedented violence, from the United States’s April 6, 1917 declaration of war on Germany through the Armistice of November 11, 1918. (Keep an eye out on these pages for my forthcoming review of this exhibition, which ends on September 3.) To complement the visual exhibition, on Friday at 6 p.m. Kevin C. Fitzpatrick will discuss his book World War I New York: A Guide to the City’s Enduring Ties to the Great War, a history of the significant role that New York City played back home while millions of American soldiers fought and thousands died on the European front, at the N-YHS. The event is free and open to the public. —AS

From the archive: “The happy critic: Arthur Danto in ‘The Nation’,” by Hilton Kramer: On the philosopher’s appointment as head art critic of the magazine. (September 1987)

From the current issue: “The Botticelli mystique” by James Hankins: On “Boticelli and the Search for the Divine” at the Museum of Fine Arts, Boston.

Sign up to receive “Critic’s Notebook” in your inbox every week—it only takes a few seconds and it’s completely free!