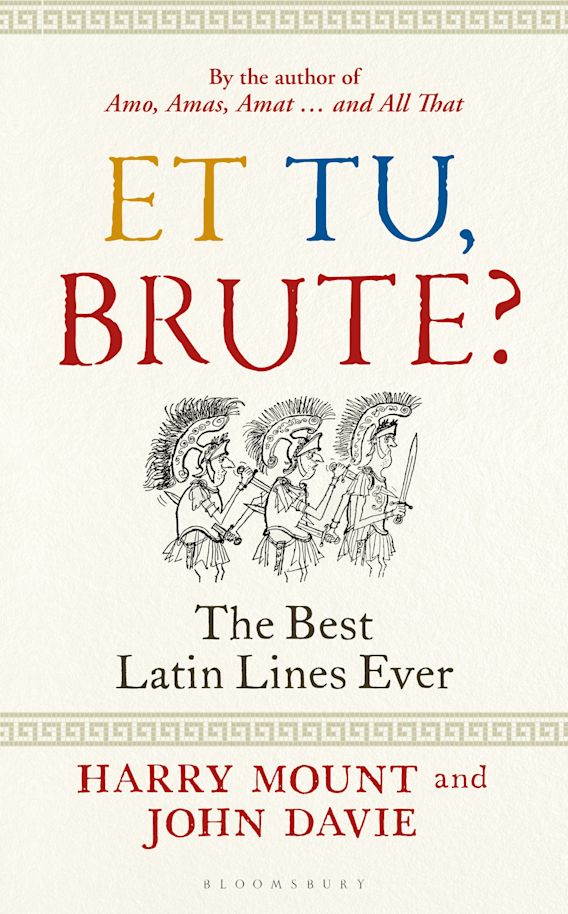 Et Tu, Brute?: The Best Latin Lines Ever, by Harry Mount and John Davie (Bloomsbury): The major lights of Latin literature—Cicero and Caesar, Catullus and Ovid, Horace and Virgil—do get their hearings in Harry Mount and John Davie’s new Et Tu, Brute?: The Best Latin Lines Ever. But instead of an Arma virumque or a Gallia est omnis divisa, the first chapter begins with a marvelously crude graffito from a thermopolium (a “snack bar”) in Pompeii. (It’s not the sort of thing you’d use for an epitaph, to put it mildly.) Indeed, the authors’ real aim in this pithy volume is to give us not just a collection of literary bon mots but rather “Rome as the Romans saw, spoke and wrote about it”—meaning that alongside the Senecas and Plinys of the ancient world, we also get chapters on Roman humor and horticulture, religion and the development of Christianity, and life in Britannia. There’s plenty to delight even the seasoned Latinist; the untutored, meanwhile, will be shocked to discover how much Latin they already know. —RE

“Master Drawings New York 2023,” along Madison Avenue on the Upper East Side (January 20–28): “Entry level” is not a term you necessarily associate with Old Masters, but works on paper can indeed offer an affordable entry point to historical art of note. Since 2006, “Master Drawings New York” has presented the best works on paper in galleries on the Upper East Side. Opening Friday evening, the weeklong survey will feature twenty-five exhibitors from the United States and Europe showing in venues along Madison Avenue. Highlights this year include Sam Fogg at Les Enluminures with “Master Drawings from the Middle Ages”; “18th-century French Drawings from a Private Collection” and “Old Master and 19th-century Drawings, 1480–1880” at Nicholas Hall in association with W. M. Brady; “The Drawings of Anna Walinska” at Graham Shay; and “The Collector and the Art Dealer: Jack Shear and David Nolan, A 20 Year Adventure with Drawings” at David Nolan Gallery. Timed to The Winter Show and the Old Master auctions, “Master Drawings New York 2023” draws us in with this welcoming annual survey. —JP

“Lisa Batiashvili Plays Tchaikovsky,” with the New York Philharmonic (January 20, 21 & 22): The cosmopolitan-minded Tchaikovsky may have stood apart from the members of the Mighty Five, that collective of Russian composers dedicated to advancing a robust new genre of national music, but he nonetheless found time to incorporate distinctly Russian elements into his tonal vocabulary. Have a listen to his famous Violin Concerto, but this time, keep an ear out for the stately, dance-like main theme of the first movement and the rustic revelry of the finale, effectively taking us from the ballrooms of the tsar to a hoedown in the village. The infamous German critic Eduard Hanslick noted its Russian nature as well, though his farcically vitriolic review of the premiere must be read to be believed: that most Slavic of finales “transports us to the brutal and wretched jollity of a Russian church festival. We see a host of savage, vulgar faces, we hear crude curses, and smell the booze.” Raise a glass at the festivities in his absence as the violinist Lisa Batiashvili joins the New York Philharmonic under Dalia Stasevska this weekend in three dates at David Geffen Hall, also featuring a premiere by Wang Lu and Sibelius’s Symphony No. 2. —IS

“An Activist Scholar: The Gavin Stamp Archive” at the Paul Mellon Centre for Studies in British Art (through May 5): Eulogizing the architectural historian Gavin Stamp (1948–2017) in The New Criterion of March 2018, Clive Aslet wrote that “People who met him in the flesh were overcome by his charm, diffidence, and erudition. But to the architectural establishment he was a scourge, as fervent in his denunciations as a seventeenth-century Leveller or Anabaptist.” Visitors to the Paul Mellon Centre in London can get a sense for Stamp’s trenchant but always informed judgments through a collection of Stampiana now on display. Ranging from humorous party invitations to a poster Stamp designed for that hub of Anglo-Catholicism, St Mary’s, Bourne Street, along with letters and other ephemera, these objects help give a sense of a man whose whole being was concentrated against uglification. For those who can’t make it to London, the exhibition’s catalogue is online. —BR

“The singing screen,” by Alexander Barylski (February 2014). A review of The Songs of Hollywood by Philip Furia.

“Sins against children,” by Scott W. Atlas. On America’s moral compass in the face of COVID.