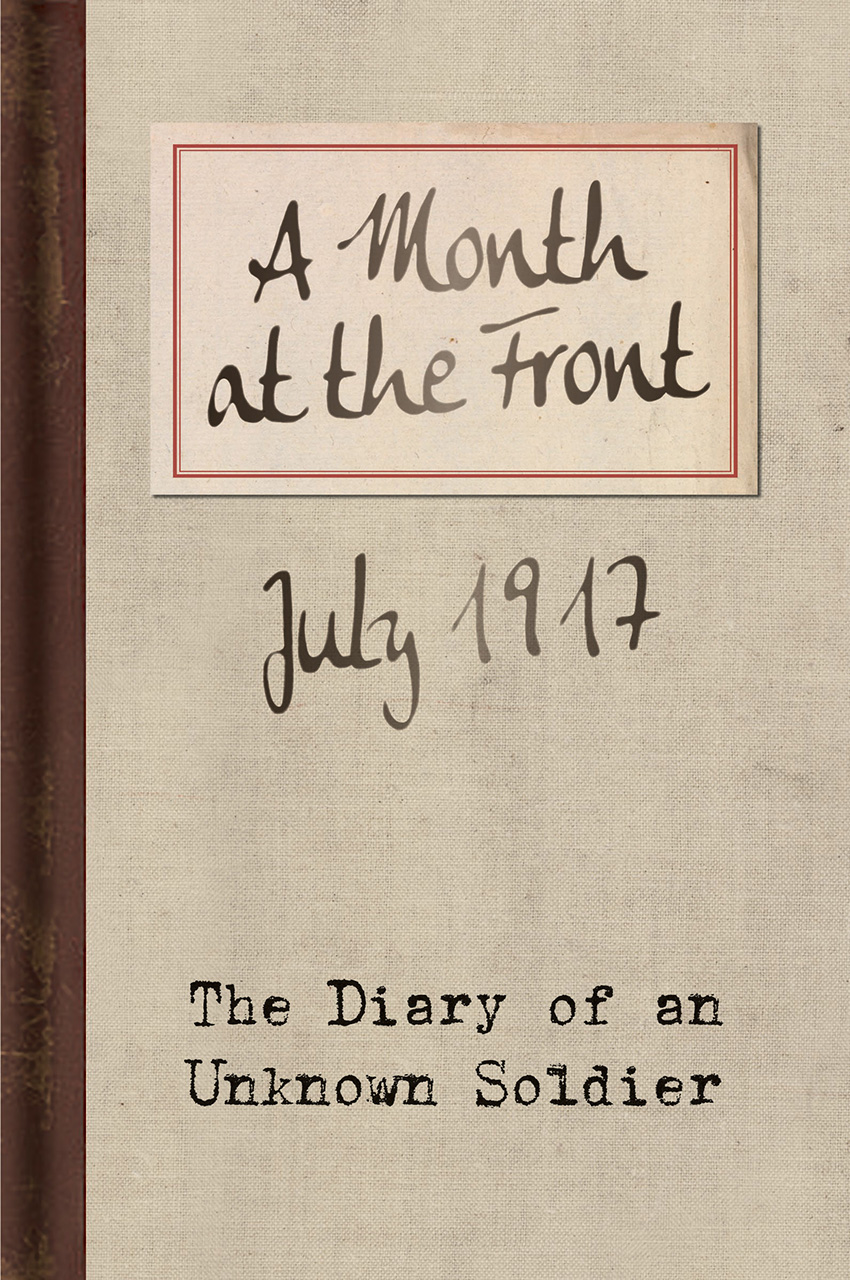 A Month at the Front: July 1917, The Diary of an Unknown Soldier (Bodleian Library): In the final sentence of an anonymous diary deposited at Oxford’s Bodleian Library in 2005, the author says, “I never expected to get out of that hole alive.” Many didn’t. The hole in question was a shell crater outside of Hollebeke, in Ypres, and the battle raging was that of Passchendaele, one of the bloodiest of the First World War. A new reissue of the diary viscerally brings the horror of the Western Front to readers in a pocket-sized edition. —BR 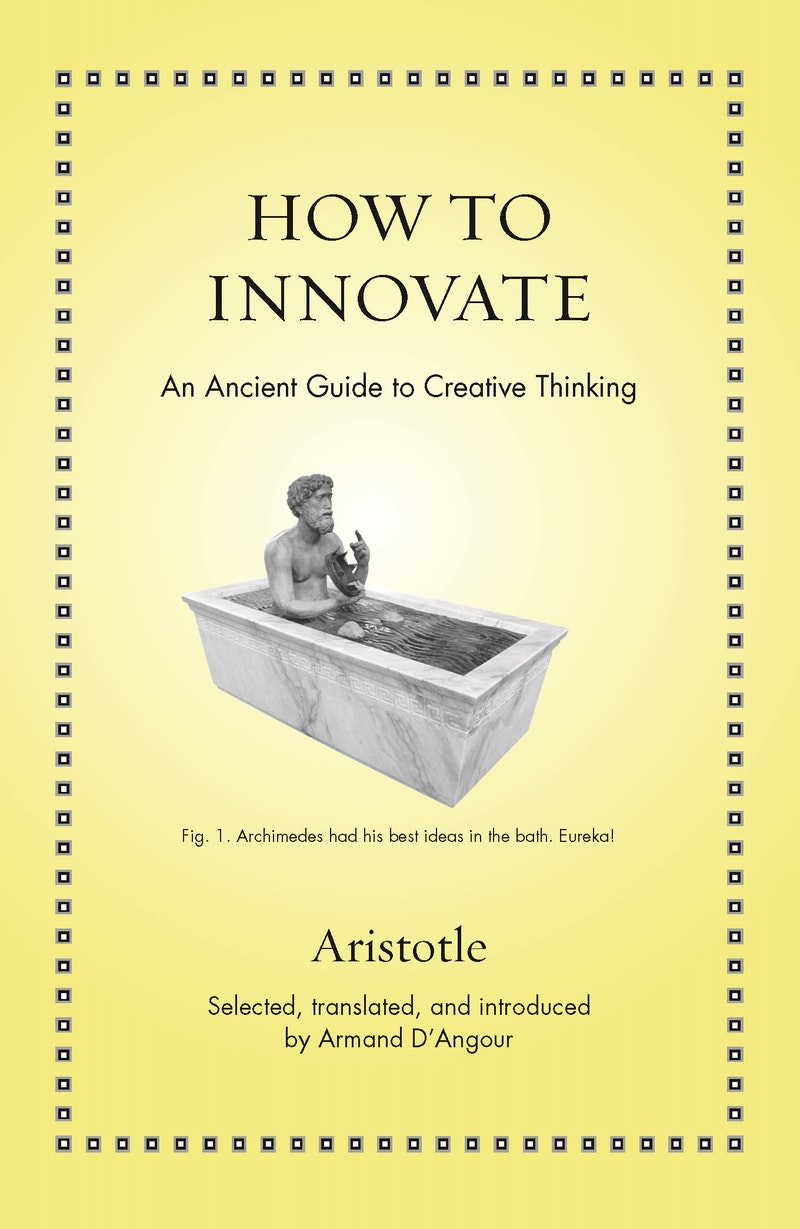 How to Innovate: An Ancient Guide to Creative Thinking, selected, translated, and introduced by Armand D’Angour (Princeton University Press): On the cover of this slim volume is a depiction of one of the more famous baths in history, the one in which Archimedes sat when he allegedly discovered the principle of buoyancy. This was his “Eureka” moment of legend—after splashing about with a crown fabricated for Hiero II of Syracuse, the story goes, Archimedes ran through the streets naked with the news that it was not real gold. Two thousand years later, brilliant minds like Archimedes are just as rare, though we’ve no shortage of naked people in the streets. So the Oxford classicist Armand D’Angour presents a welcome reminder in How to Innovate by including an ancient Greek account of the elaborate construction of the ship Syracusia, a process in which Archimedes was involved and which likely contributed more to his understanding of buoyancy than a counterfeit crown ever did. Placed beside this account of innovation from Athenaeus of Naucratis are others from Aristotle and Diodorus Siculus, in Greek with facing translations; these are interspersed with essays by D’Angour providing helpful background information. Here is one lesson: to innovate, look to the past, not the bathtub. —RE

“Modern Times: British Prints, 1913–1939” at the Metropolitan Museum of Art (through January 9, 2022): In simplified line, color, and form, the modern British print made sense out of modern British life. Inexpensive woodcut and linocut works captured, reflected, and gave their buyers ownership over the accelerating speeds and abstractions of the times. “Modern Times: British Prints, 1913–1939,” a major exhibition of one hundred of these works now on view at the Metropolitan Museum of Art, reveals the sense and sensibility of Sybil Andrews, Claude Flight, Christopher Richard Wynne Nevinson, Cyril Power, and Edward Wadsworth, among others. The exhibition also pays tribute to Leslie and Johanna Garfield, the husband-and-wife collecting team who pursued these rare works over three decades and gathered them together before transferring them to the Metropolitan in 2019. Beginning around World War I with the black-and-white images of Wyndham Lewis and the Vorticist Edward Wadsworth—Vorticism being the short-lived British response to Futurism—the exhibition follows British printmaking through the colorful interwar years of the “Grosvenor School,” with its artists applying swirls and jags to the circles of the Tube, the curves of the concert hall, and the eddies of the crew oar. Look for more on this exhibition in a feature by Benjamin Riley in the forthcoming December issue. —JP

Leonidas Kavakos and Yuja Wang at Carnegie Hall (November 4): Dmitiri Shostakovich dedicated his Sonata for Violin and Piano in G major, Op. 134, to David Oistrakh in 1968, in time for the lavish celebrations commemorating the violinist’s sixtieth birthday. Oistrakh gladly premiered the piece accompanied by his fellow Soviet virtuoso (and native Odessan) Sviatoslav Richter (that recording can be heard here). One of the ailing composer’s final compositions, Shostakovich’s sonata looks ahead—or back, depending on how one considers the arrested development of Soviet musical theory—to twelve-tone music and back to the contrapuntalism of J. S. Bach upon which he so often drew. Shostakovich wrote in an open letter to his fellow musicians while composing the piece, “By building bridges into the future, we must take care not to burn the bridges connecting today’s culture to its immortal past.” This Thursday evening, the violinist Leonidas Kavakos and the pianist Yuja Wang will present a program at Carnegie Hall held together by many such bridges, featuring Bach’s Violin Sonata in E Major (BWV 1016), Ferruccio Busoni’s Violin Sonata No. 2, and Shostakovich’s G-major sonata. —IS

“Imperial Splendor: The Art of the Book in the Holy Roman Empire 800–1500” at The Morgan Library (through January 15, 2022): The history of the Holy Roman Empire is often glossed over because of its complexity. It did not culminate in a nation-state, nor did it act in the way we imagine empires should, in that it did not have a strong core commanding weak peripheral territories. In the eighteenth century, Voltaire said it was “in no way holy, nor Roman, nor an empire,” while James Madison called it “a nerveless body, incapable of regulating its own members . . . and agitated with unceasing fermentation in its own bowels.” But despite its peculiarities, the Empire managed to last a thousand years. A new exhibition at The Morgan Library reveals the vibrant manuscript culture that thrived within its territories from the time of Charlemagne to the eve of the Reformation. —JC

“Young Winston’s Salvation,” by David Fromkin (March 1990).  A review of The Story of the Malakand Field Force & other early works by Winston Churchill.

“Roger Kimball introduces the November issue.” The Editor and Publisher of The New Criterion discusses highlights of the November 2021 issue and reads from its opening pages.

“Calling all Wagnerites,” by Jay Nordlinger. On Die Meistersinger at the Metropolitan Opera