This week: On gardens, Fred Gutzeit, the Goths & Alejandro Cerrudo. 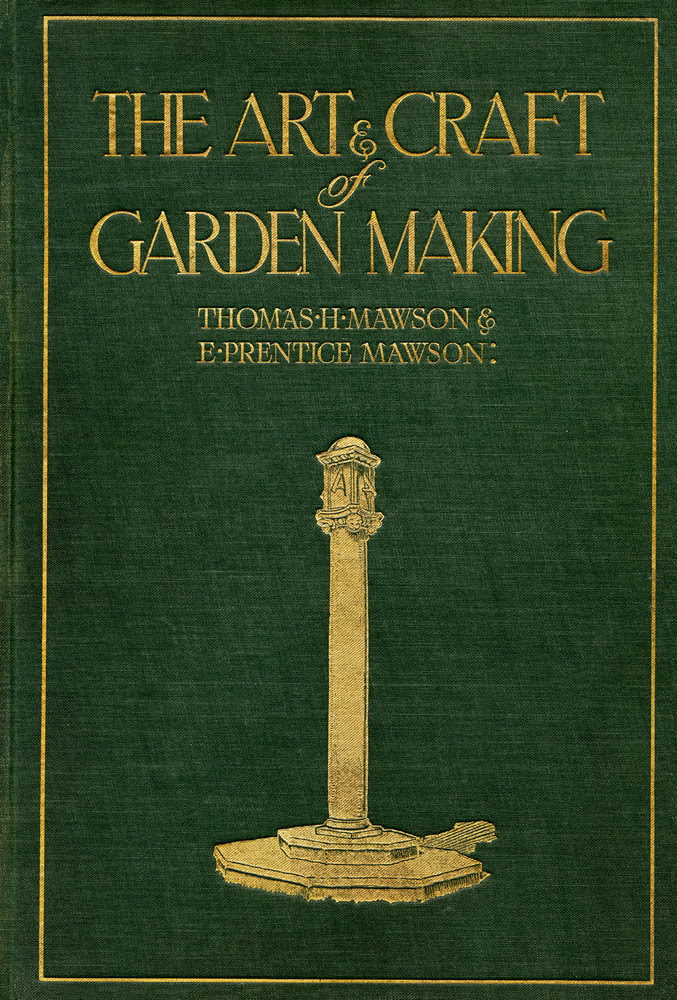 The Art & Craft of Garden Making, by Thomas H. Mawson, with a foreword by Clive Aslet (Stolpe): For those with gardens, or those who merely dream of them, Thomas H. Mawson’s The Art & Craft of Garden Making is an essential text. With twenty chapters ranging from garden history to “the formal arrangement of trees” and “hardy perennials for beds, borders, etc.,” the book is both a practical guide to the creation of gardens and documentary evidence of Mawson’s supreme facility in the art. Though he was born in middling circumstances, Mawson’s talent led him to major commissions, such as the grounds of Andrew Carnegie’s Skibo Castle. More than five hundred illustrations to his text convey just what a master Mawson (who died in 1933) was in the designing of spaces for life out of doors. Long out of print, his magnum opus, which went through five editions, is now presented in a surpassingly handsome facsimile edition by Stolpe, with a foreword by Clive Aslet, who does much to place Mawson in the context of his period. —BR

It Starts Now, choreographed by Alejandro Cerrudo, at The Joyce Theater (September 28–October 3): While many major dance companies are opening the fall season with beloved classics—New York City Ballet with Serenade, American Ballet Theatre with Giselle—The Joyce Theater has never played it safe. One of the few venues in the country built specifically for dance, The Joyce managed to produce some of the better digital premieres of this past year, such as Alexei Ratmansky’s nine-minute duet Neo. Opening next Tuesday, It Starts Now is the first solo production by Alejandro Cerrudo. Grounded in both classical ballet and contemporary dance (he was the resident choreographer of the contemporary group Hubbard Street Dance Chicago before taking up the same position at the Pacific Northwest Ballet), Cerrudo is perhaps best known to New York audiences for his 2013 duet Ego et Tu created for Wendy Whelan’s show “Restless Creature,” her first project after retiring from ballet that was featured in a 2017 documentary of the same name. Taking inspiration from a Borges quote—“Time is a river which carries me along, but I am the river. . . . it is a fire that consumes me, but I am the fire”—Cerrudo describes this new work as a “capsule of moments” in which time appears to slow down and speed up. The trailers show an intriguing combination of jittery and undulating movements, warm and cool lighting, and props that include hand-held lights and a smoke-releasing jacket. —JC

“Lost Civilizations: The Goths with David Gwynn,” at the 92 Street Y (September 28): Tacitus wrote in his Germania at the end of the first century A.D. of a people called the Gothones, “distinguished by round shields, short swords, and submission to regal authority” but who lived a life “not . . . incompatible with liberty.” The historian, in that thin volume, was inviting contemporary Romans to compare their own society with those of the many Germanic tribes to the north, who were otherwise seen mostly as barbaric nuisances. The difficulty with such comparisons follows from the remoteness of their object—seemingly incomprehensible savages, in the eyes of cultured Romans—but that remoteness is also the source of their salience, the diamond-in-the-rough quality that makes the unexpected similarities so memorable. These “Gothones” may have been quite different from the Goths who, three centuries later, would sack the city of Rome under Alaric. And the whole story is even more remote from us in the twenty-first century, seeing as the last of the Gothic peoples faded out of view a millennium ago. But attendees of the lecture delivered next Tuesday, September 28, for the 92 Street Y by David Gwynn, the author of a recent book on the subject, may find pieces of that buried culture still resurfacing today. —RE

“The last Redcoat,” by Timothy Jacobson. On the end of the American Revolution.