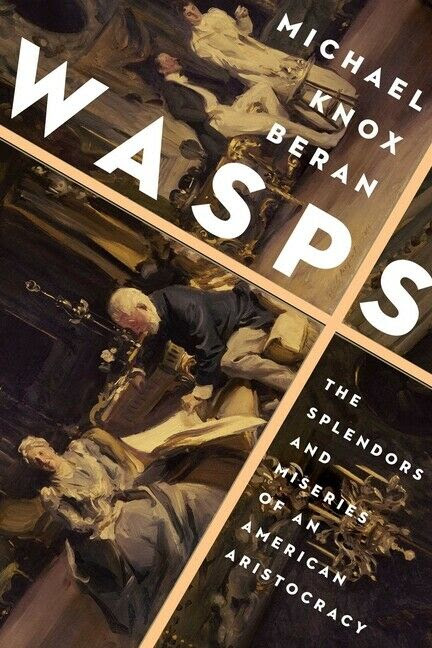 WASPS: The Splendors and Miseries of an American Aristocracy, by Michael Knox Beran (Pegasus Books): According to the OED, the term WASP entered the American vernacular in the 1960s, a time when the taste for demographic taxonomy had outgrown its heady Volk origins but not yet metastasized into today’s dysgraphic jargon. (Looking at you, LGBTQIA+.) The problem with all such labels, of course, is that they often obscure in the singular what they denote in the plural. So the task that Michael Knox Berantakes up in his new book, WASPS, is a welcome one: to investigate such fascinating lives as those of Henry Adams and Isabella Stewart Gardner, Franklin D. Roosevelt and Dean Acheson, and trace out the achievements and failures that, as the WASPs’ heyday was coming to a close in the Sixties, warranted their being lumped under that entomological-sounding umbrella. (Hint: there was more to it than their being white, Anglo-Saxon, and Protestant.) —RE

Masterworks Series: Haydn, Handel-Halvorsen, Beethoven, at Bargemusic, Brooklyn (August 28): Tracing the long history of folk music’s influence on classical music is a fascinating and tricky endeavor. Some cases are clear-cut—Ralph Vaughan Williams trawling the English countryside for folk ballads, for example—but a particularly careful hand is called for in the case of Joseph Haydn. Musicologists have identified folk elements throughout his music, and it seems practically certain that Haydn’s experience of folk music from an early age—he was born the humble son of an amateur musician and wheelwright, after all—left a lasting impression on him. But as the depiction of the plowman in Haydn’s oratorio The Seasons implies—the merry fellow whistles a theme from Haydn’s “Surprise” Symphony as he works—identifying specific folk themes that influenced the music of so popular a composer could be a case of the chicken and the egg. This Saturday, Mark Peskanov (violin), Edward Arron (cello), and Jeewon Park (piano) will present Haydn’s most explicitly folk-inflected composition, the so-called “Gypsy” Piano Trio No. 39 in G major, Hob. XV/25 (1795), along with Beethoven’s Archduke Trio and Johan Halvorsen’s adaptation of a passacaglia by Handel. Tickets are on sale for this in-person performance on Brooklyn’s floating Bargemusic stage. —IS

Kaatsbaan Summer Festival: New Classical Dance Works at Kaatsbaan Cultural Park, Tivoli (August 28–29): This weekend, three new ballets are premiering at the 153-acre Kaatsbaan (Dutch for “playing field”) Cultural Park. Formerly Tivoli Farms, the horseriding grounds of Eleanor Roosevelt, the Cultural Park became a creative refuge for dancers this past year—its self-contained accommodations and studios, as well as its distance from the city, made it easy for troupes to form “bubbles” while rehearsing new works. For the Summer Festival, the Park has commissioned the choreographer Gemma Bond, also a current American Ballet Theater corps member and former Royal Ballet dancer, who has created a piece using Rachmaninoff’s Thirteen Preludes, Op. 32, for a group of dancers including ABT Principals Devon Teuscher and Cory Stearns. Lauren Lovette, who will be dancing in a farewell performance with the New York City Ballet in October, is debuting a pas de deux, and Claire Davison’s piece, set to classical and Venezualan folk music, combines “clowning, dance, slapstick, juggling, and aerial dance.” Dancers will perform amid the Catskills on the Park’s new Mountain Stage, finished earlier this year to accommodate the recent preference for outdoor seating. —JC

“One Hundred Days of Dante” presented by Baylor University’s Honor College (begins September 8): When the “straightforward pathway ha[s] been lost” (la diritta via era smarrita), we could all use a Virgil as our guide. Last April, Daniel Mark Epstein wrote about “ ‘The Divine Comedy’ at 700.” Now for those who wish to visit or revisit the full hundred Cantos of Dante’s divine masterpiece, Baylor University’s Honors College will host what it says will be the world’s largest Dante reading group. Through individual videos and reading guides presented in partnership with five other universities, “One Hundred Days of Dante” will guide readers through the “Inferno,” “Purgatorio,” and “Paradiso,” one canto a day. The reading begins the week of September 8 and ends (as the story does for Dante himself) at Easter. Registration is now open for this free event. An introductory panel discussion on “Reading Dante Together: Why the Divine Comedy Matters and How to Read It Well” just went up online. —JP

“Ideas as anecdotes,” by Mark Bauerlein (October 2001). A review of The Metaphysical Club: A Story of Ideas in America by Louis Menand.

“ ‘A Pitiful, Helpless Giant,’ ’’ by Conrad Black. On the recent failures of the Biden Administration.