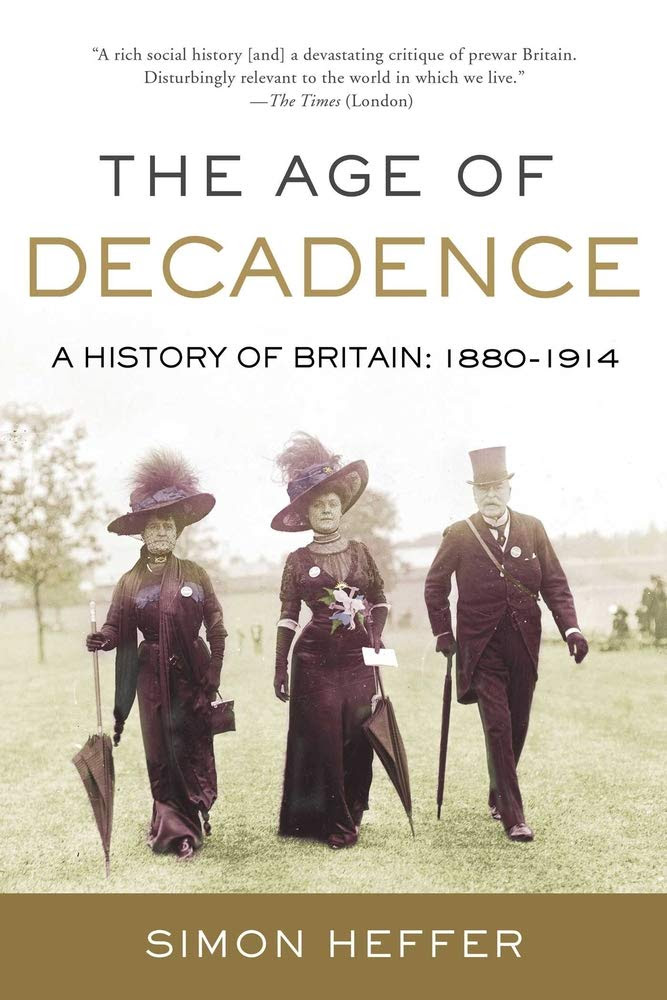 The Age of Decadence: A History of Britain: 1880–1914, by Simon Heffer (Pegasus): Reviewing Simon Heffer’s The Age of Decadence in The New Criterion of October 2018, Jeremy Black noted that “Heffer’s ideas are so exciting because they make you think. That surely is the job of the historian.” Quite so, and we can be glad that a larger audience will now have access to Heffer’s stirring history of Britain, covering the years preceding the great catastrophe that was World War I, with the publication of The Age of Decadence in America by Pegasus last week. Remarkably, this is Heffer’s first book published in the United States. May it be the first of many. —BR

“Dee Shapiro: In The Beginning. . . Selections From 1974 through 1980,” at David Richard Gallery (through April 23): Painting came late to abstraction, while textiles have employed abstract patterns since, well, about the first time warp met weft. In the 1970s, abstract painters explored this tradition through a movement known as Pattern and Decoration. For Dee Shapiro, that meant knotting intricate lines of paint, extruded directly from the tube, into patterns that resembled knitting and rug-making. “In The Beginning. . . Selections From 1974 through 1980,” a survey of Shapiro’s intensely patterned early production, is now on view at East Harlem’s David Richard Gallery with over a dozen works tied together in acrylic, watercolor, and pencil. —JP

“Nell Blaine: Interiors and Flowers, 1961–1990,” at Tibor de Nagy Gallery (through April 24): In 1922, T. S. Eliot told us of April’s “breeding/ Lilacs out of the dead land . . . ” and thus instantly doomed a robust tradition of serious modern artists making pleasant pictures of purple flowers. Or so one might think. For one bit of evidence to the contrary, witness the exhibition of paintings and watercolors of “Interiors and Flowers” by Nell Blaine, on now at Tibor de Nagy on the Lower East Side. Blaine’s sunny still lifes can seem disarming at first, but extended looking will reveal how the Hofmann-trained ex-abstractionist brought a rare sense of formal aplomb and painterly liveliness to these placid subjects. —AS

In-person concerts at Saint Thomas Church, Manhattan: Strolling past Saint Thomas Church in Midtown Manhattan this last weekend, I’ll admit I had to look twice when I saw a live concert in progress through the parish doors. This performance, the sixth chapter in an ongoing cycle of Beethoven’s complete sonatas for piano played by Adam Golka, was Saint Thomas’s first in-person concert since the pandemic began. A small but promising live schedule is planned for the coming weeks as part of the church’s Concert Series, including further installments in the Beethoven series (May 22) and a cycle of Marcel Dupré’s complete works for organ performed by Jeremy Filsell (April 24). To purchase tickets, select a concert here and click “Tickets” or “RSVP.” I am told that limited seating has just been made available and will sell out fast. For those who are unable to attend, all concerts will also be streamed via the church’s website. —IS

“Who shall ’scape whipping?,” by Anthony Daniels (November 2007). On Ted Honderich’s strange thoughts on punishment.

“Freeze-frame,” by Peter Malone. On “Tim Wilson: Between Either and Or,” at Nathalie Karg Gallery.