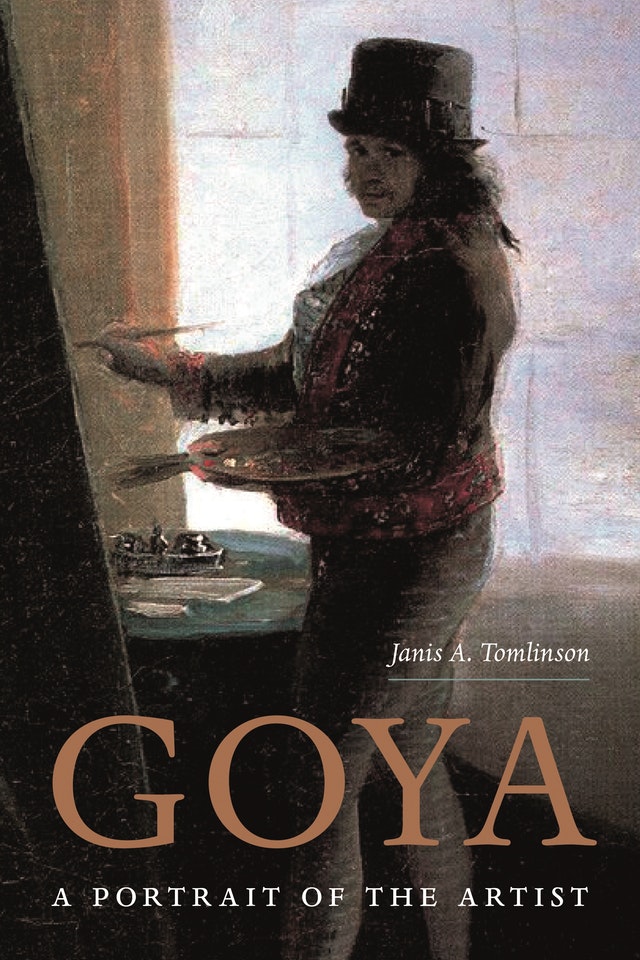 Goya: A Portrait of the Artist, by Janis A. Tomlinson (Princeton University Press). I’ve always felt Francisco Goya to be an artist who’s hidden in plain sight. Despite creating so many iconic images that sear themselves onto the brain (see The Third of May 1808, 1814; Saturn Devouring His Son, ca. 1819–23; The Sleep of Reason Produces Monsters, 1799; etc.), Goya (1746–1828) remains elusive and escapes easy categorization. Part of this may have to do with the extreme variety of his output, which spanned from early religious narratives, to magisterial portraits of the Spanish Royal Court, to politically aware paintings and etchings of the Peninsular War of 1808–14, to the interior and demonic “Black Paintings” made at the late age of seventy-five. Robert Hughes’s vivid 448-page treatment from 2003 remains perhaps the best introduction to the artist and his work for English readers, but those looking for a more straightforward and scholarly biography will benefit from Janis A. Tomlinson’s Goya: A Portrait of the Artist, out now from Princeton. Look for a more comprehensive review of the volume in a forthcoming issue of The New Criterion. —AS

Storm King Art Center: The bucolic landscape of Storm King Art Center, just west of the Hudson River in Orange County, New York, an hour’s drive north of the George Washington Bridge, might just steal the show from any art on view. The outdoor sculptures in this rolling five-hundred acre meadow park must therefore find their own ways to engage the environment around them. At their best, the sculptural forms on display are enlivened by the stunning scenery of the museum. Andy Goldsworthy’s stone walls slither through the woods. Richard Serra’s black tines slice into the hillside. Alexander Calder’s red waves float among the hilltops. Mark di Suvero’s towering gantries stand athwart the landscape like cargo-cult totems. Painted in straw-meadow yellow and sugar-maple red, the fall shows the works at Storm King in the best color and light. Now open again through advance ticket sales, Storm King has been selling out each weekend, and for good reason. —JP

The Escher String Quartet live at Mahaiwe Hall (October 24): Mahaiwe Hall, founded in 1906, is a historic performing arts venue in the small town of Great Barrington, nestled among the Berkshires in western Massachusetts. Like London’s Wigmore Hall (featured in last week’s Critic’s Notebook), Mahaiwe Hall is soldiering on with a fall season of concerts that will be streamed online. This Saturday, be sure to tune in for a concert by the Escher String Quartet, who are also regulars on the Wigmore Hall stage. On the program are Brahms’s String Sextet, Debussy’s String Quartet, and Beethoven’s String Quartet No. 2, along with commentary on the pieces as part of the long-running “Close Encounters with Music” concert series.  —IS

“Master Class: Stanford White in Detail,” with Samuel G. White, via the 92nd Street Y (October 20): Stanford White’s flair for dramatic architecture is as well established as his flair for life was. But he was also a canny interior designer, wedded to the effects decoration could engender, not to any academic rules about propriety. The Veterans Room at the Park Avenue Armory, for instance, with its fantasia of wood and tile, displays White’s syncretic talent to good effect. The Monacelli Press’s new Stanford White in Detail, by Samuel G. White, the architect’s great-grandson, has many more illustrated examples of White’s exuberance and represents a worthy addition to studies of American architecture’s golden age. Tomorrow White will deliver an online talk on his ancestor’s original approach to interior design. —BR

“Mr. Hyde & the epidemiology of evil,” by Theodore Dalrymple (September 2004). On a persistent misunderstanding of The Strange Case of Dr. Jekyll and Mr. Hyde.

James Panero on Plymouth Rock. James Panero reads “Like a rock,” his Letter from Plymouth in the November 2020 issue of The New Criterion.

“Lullabies for piano,” by Jay Nordlinger. On a new album by Bertrand Chamayou.