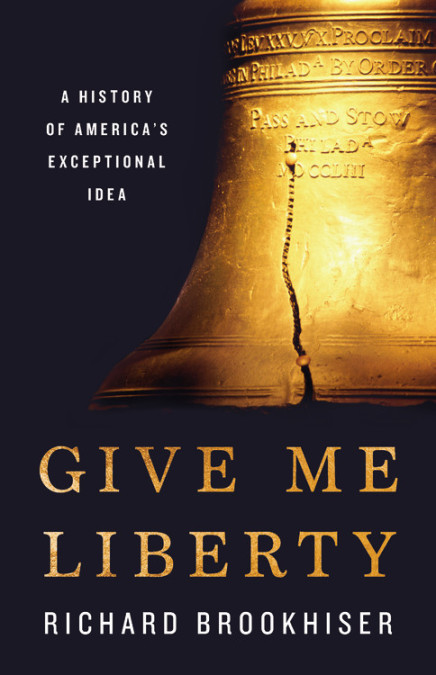 Give Me Liberty: A History of America’s Exceptional Idea, by Richard Brookhiser (Basic Books): That Richard Brookhiser has left out the second half of Patrick Henry’s famous injunction from the title of his new book does not imply a distaste for rhetorical fireworks. Quite the contrary: by examining thirteen public documents integral to the history of the United States, most of them informed by sentiments every bit as impassioned as Henry’s, Brookhiser affirms that our country’s commitment to liberty exists on a national level and has sturdy enough roots to outlive any one of us. At the same time, our unique notion of liberty begins and ends with the individual and only admits state-sanctioned intervention when necessary. As Brookhiser shows, time and time again—from the first meetings of the Jamestown General Assembly to Reagan’s proclamation of a free and sovereign Berlin—the American people have found a lofty common ground in the affirmation that their nation exists first and foremost to protect the liberties of its constituents. The day we forget that fact will be the death of the Union as we know it. —RE

“Carolanna Parlato: Catch and Release,” at Morgan Lehman Gallery (through December 14): A lifetime of studio choreography, pouring acrylic paint onto tipped canvas, now results in the virtuosity of Carolanna Parlato’s first solo exhibition at Morgan Lehman Gallery in Chelsea. With minimalist forms floating in maximalist ease, her biomorphic colors embrace in a nebulous confection. Parlato’s deft handling of white in these large paintings adds an extra layer to the dynamics of push-and-pull and figure-and-ground. Here is abstraction brought up to date, still redolent with the fresh smell of paint. —JP

“Alma Deutscher at Carnegie Hall,” presented by the Packard Humanities Institute and Columbia Artists (December 12): The story of the composer Alma Deutscher sounds like its own fairy tale. At the age of five, a girl studies with a teacher in a remote Swiss village a lost method of composition first developed in the eighteenth century for Neapolitan orphans. At six she composes her first piano sonata, and at ten her first full-length opera, a new Cinderella. This time the title character is a composer, and, rather than a tiny glass slipper, the prince seeks her out carrying one of her lost melodies. (Heather Mac Donald wrote about it in our pages last year). This Thursday, the fourteen-year-old phenom comes to life with her Carnegie Hall debut. She will perform both of her concertos as a soloist in an all-Deutscher program that also includes a concert waltz and selections from Cinderella, accompanied by Natalie Image (soprano), Jonas Hacker (tenor), and the Orchestra of St. Luke’s. —JP

New Work for Goldberg Variations, by Pam Tanowitz and Simone Dinnerstein, at The Joyce Theater (nightly through December 15): When Simone Dinnerstein released her best-selling version of the Goldberg Variations in 2007, she opened the well-known doors of Bach’s Wunderkammer to new light and air. Since then she has looked for more of the unusual in the well-known, recording her album Bach: A Strange Beauty and performing a new concerto written for her by Philip Glass. A few years ago, Dinnerstein reached out to the Mercian choreographer Pam Tanowitz to set Goldberg to dance. This would not be the first Goldbergian ballet—Jerome Robbins premiered his own famous version in 1971—but it was the first set to Dinnerstein’s romantic, shimmering interpretation. This week the two present their shared vision at The Joyce Theater, with Dinnerstein and the artists of Pam Tanowitz Dance together on stage. —JP

“British Aristocrats and American Plutocrats in the Age of Sargent,” with Sir David Cannadine, at the Morgan Library (December 11): It seems as long as there have been penniless British aristocrats there have also been rich Americans more than happy to trade dollars for titles. And when rising ladies wanted a portrait done at the turn of the twentieth century, no man was more fit for purpose than John Singer Sargent, born of colonial American stock and raised in Europe. On Wednesday, Sir David Cannadine will discuss transatlantic matrimonial trade at the Morgan, in connection with the museum’s ongoing Sargent exhibition. —BR

“The collecting life” by Denys Sutton.  A review of The Havemeyers: Impressionism Comes to America by Frances Weitzenhoffer.

“Oases of modernity,” by Robert Becker.  On “Signs and Wonders: The Photographs of John Beasley Greene” at the San Francisco Museum of Modern Art.