This week: A low-country curse & sculpture in verse

American Louvre: A History of the Renwick Gallery Building, by Charles J. Robertson (GILES): At the time of its opening in 1874, few could have guessed that the heyday of the Renwick Gallery would not last beyond the nineteenth century. Housed in a grand Second Empire building and dubbed the “American Louvre,” the museum suffered the loss of William Corcoran’s iconic collection in 1897 and served as office space for a shuffling list of government agencies until 1965, when President Johnson secured its final destiny as the Smithsonian’s store of contemporary art. On the bright side of this tragedy, Charles J. Robertson’s book American Louvre describes the lasting influence that the Renwick building has had beyond the confines of its own collection, launching the career of its architect James Renwick and helping to popularize the Second Empire style in the United States. —MU

“Romare Bearden: Bayou Fever and Related Works” at the DC Moore Gallery (through April 29): Collaboration among art forms has been central to the animation of Modernism, even if such cross-pollination has often been relegated to the periphery of modern art history. Now at New York’s DC Moore Gallery through April 29, “Romare Bearden: Bayou Fever and Related Works” presents a series of twenty-one collages from 1979 that Bearden (1911–1988) designed for an unrealized ballet to be choreographed by Alvin Ailey. Infused with Bearden’s sense for story, custom, and faith, “Bayou Fever” depicts a low-country good-versus-evil confrontation between a Conjur hoodoo woman and a swamp witch. This Friday and Saturday at 6 o’clock PM in the gallery, the South African choreographer Dada Masilo will re-envision Bearden’s work in a new dance piece commissioned by Columbia University’s Center for Jazz Studies. —JP 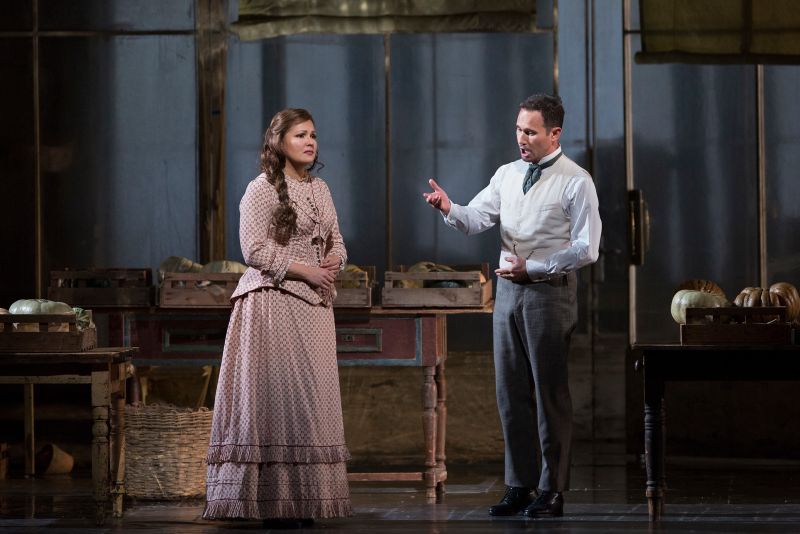 Eugene Onegin performed by the Metropolitan Opera (through April 22): We’re entering the home stretch of the musical season, with just a month and change left at the Metropolitan Opera, Carnegie Hall, and other peer institutions. Among the highlights remaining on the Met’s calendar is a revival of Tchaikovsky’s grand tragedy Eugene Onegin, in a production by Deborah Warner. This season's superb cast features Mariusz Kwiecien and Peter Mattei in the title role, with Anna Netrebko reprising her star turn as Tatiana. Rounding out the cast are Elena Maximova as Olga, Alexey Dolgov as Lenski, and Stefan Kocan as Gremin. Robin Ticciati conducts. —ECS

“Poems About Sculpture” at the Noguchi Museum (April 5): In describing the unlikely friendship between Rainer Maria Rilke and Auguste Rodin, the poet Mark Doty recalled that Rilke “wanted to write poems with the same kind of muscularity and physical presence as Rodin’s sculptures.” Next Wednesday, the Noguchi Museum in Long Island City will host readings from Poems About Sculpture by Robert Pinsky and Rachel Hadas, contemporary poets who have been similarly seized by form and physicality. (Hadas’s poem in the current edition of The New Criterion, for example, draws inspiration from Bernini.) The sculptor Murray Dewart, who edited the Poems About Sculpture anthology, will also give remarks at the event—a testament to the sustained, fruitful intermingling of the two art forms. —MU

From the archive: “Kandinsky & the birth of abstraction,” by Hilton Kramer: On the theory of the Russian painter and a retrospective exhibition at the Museum of Modern Art.

From the current issue: “The fall of the House of Cazalet,” by Dominic Green: On the baroque life and works of Elizabeth Jane Howard.