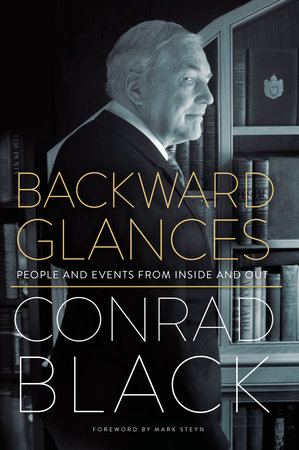 Backward Glances: People and Events from Inside and Out, by Conrad Black (Signal): The prolific historian and biographer Conrad Black is a force of nature. In his career as a press baron, abruptly terminated by an egregious instance of prosecutorial abuse, he oversaw one of the largest publishing empires in the Anglosphere, an operation that included The Jerusalem Post, the London Telegraph and Spectator, assorted American papers, and several publications in his native Canada. He has written widely admired biographies of FDR and Richard Nixon, a penetrating strategic history of the United States and a meticulously argued account of his up-close-and-personal encounters with the ironically named American Justice Department. His latest opus is a plump collection of essays, reviews, animadversions, and journalistic interventions called Backward Glances: People and Events from Inside Out. This 700-page literary cornucopia collects nearly five decades of political, social, legal, and historical commentary from the pages of National Review, Foreign Affairs, National Post, The American Spectator, The New Criterion, and other periodicals and newspapers. His subjects range from an assessment of LBJ (about whom he is surprisingly friendly), and the sex life of JFK (about which he is generously forgiving), to international affairs, various politicians, and a fascinating baker’s dozen essays on religion, including a moving account of why he became a Roman Catholic. This is a literary testament of a worldly, curious, humane, and prodigiously well informed man who is as untainted by false modesty as he is fired by a passionate commitment to freedom. Any sentient person will want to have this book in his library, relocating it there after a stint on the bedside table where it will have been a store of informative observation and stimulating and intelligent commentary. —RK

“The Warmth of Winter” at the National Arts Club (through January 6): The National Arts Club on New York’s Gramercy Park has been hosting groundbreaking art exhibitions for over a century. Members of the Ashcan School mounted a historic exhibition in its Grand Gallery a decade before the Armory Show of 1913. Now through January 6, a group exhibition called “The Warmth of Winter” organized by the artist Dee Shapiro pays homage to that legacy by bringing together a thoughtful cross-section of artists from what we might very broadly call today’s “Brooklyn School.” With work by Gary Petersen, Brece Honeycutt, Amy Lincoln, Patricia Fabricant, Oriane Stender, and over sixty others, the exhibition benefits the club’s Will Barnet Student Show Prizes—cash awards for artists of high-school age, named after the centenarian painter and longtime artist-in-residence at the club who died in 2012. —JP

Candide performed by New York City Opera at the Rose Theater (through January 15): Operetta was always a strong suit of the old New York City Opera, and the newly reformed NYCO is well suited to continue that tradition, giving most of their performances in a space more intimate than the palatial Met. This Friday, the company starts 2017 with a run of Leonard Bernstein’s Candide, starring Jay Armstrong Johnson and Meghan Picerno, and directed by Harold Prince, the legendary creator of countless hit Broadway stagings, including She Loves Me, Company, Follies, and Sweeney Todd. —ECS

“Stoic School of Life with Massimo Pigliucci” at the New York Society for Ethical Culture (January 9): The first weeks of each year bring New Year’s resolutions—earnest plans for self-improvement, a few of which may come to pass but the bulk of which will fade as the rush of life returns. Next Monday, the City College philosophy professor Massimo Pigliucci will discuss a school of thinkers for whom self-mastery was more than a fleeting ambition. Pigliucci’s lecture on the Stoic philosophers, hosted by the Society for Ethical Culture on the Upper West Side, will examine not only the thought but also the conduct of Seneca, Marcus Aurelius, and their likeminded contemporaries. Whatever one makes of the underlying philosophy, the lives of the Stoics themselves will be a fine example to all those hoping to act with intention in the coming months and beyond. —MU

From the archive: “What Dido did, Satan saw & O’Keefe painted,” by Mark Bauerlein: How the humanities can come out on top in the education debate.

From the current issue: “Populism, V: A bulwark against tyranny,” by James Piereson: On the structural safeguards of the U.S. Constitution.

Broadcast: A discussion on museums, featuring James Panero, Eric Gibson, Karen Wilkin, and Bruce Cole. From “The Future of Permanence in an Age of Ephemera,” the symposium hosted by The New Criterion at the Consulate General of France on October 21, 2016.