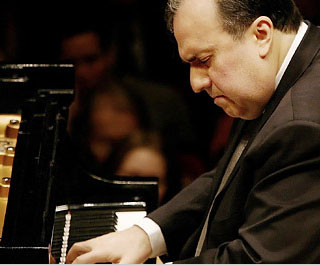 This month, the New York Philharmonic is performing the Beethoven piano concertos—all five of them. They are throwing in the triple concerto (for violin, cello, and piano) for good measure. The piano soloist, all month long, is Yefim Bronfman, than whom there is not a better pianist in the world. He is not a pianist merely for now but for all time.

Speaking of rankings, how would you rank the five Beethoven piano concertos? Which do you judge best, and how would you fill out the remainder of the card? I may weigh in on this before the end of the month . . .

At Friday night’s concert, there were the Concerto No. 1 in C major and the Concerto No. 4 in G major, with a new piece in the middle. Since I have written almost as many words about Bronfman over the last 20 years as I have U.S. presidents, I will keep it brief.

Bronfman’s playing in the first movement of the C-major was limpid, like water. This was pure C-major playing—appropriate to the key and mood. He showed his usual combination of strength and lyricism. Bronfman’s is a masculine lyricism, as Leif Ove Andsnes’s is. But the Norwegian can be cold, or at least cool, in a way that Bronfman almost never is.

Bronfman is made for Beethoven, given this strong lyricism, and the intelligence, and the technique, and everything else in this pianist’s arsenal. Not excluded from this arsenal is humor: Bronfman revealed some of that in the cadenza.

On the podium, as he will be throughout the Beethoven-fest, was Alan Gilbert, the Philharmonic’s music director. He is adept in Beethoven. In fact, he conducted one of the best performances of the Fourth Symphony I have ever heard. It was outdoors, in a park, too. In other words, it took place under unfavorable conditions. (Park performances are almost never any good.) Gilbert is both solid and smooth, and knows how Beethoven should be sculpted.

The second movement of the First Concerto had a miraculous virtue: the right tempo. This tempo is very hard to get right, as people err on the side of too slow or too fast. The music breathed and rose and fell as it should, and I don’t remember ever liking it more.

The final movement, the Rondo, begins with a figure in the piano that is easy to botch. It reminds me of the opening figure in one of Beethoven’s C-major piano sonatas, Op. 2, No. 3—also easy to botch. Bronfman had no problem. But he and Gilbert seemed to have a bit of a problem settling on a tempo in this movement. Also, it was a little sober, needing more humor, more playfulness.

Regardless, the concert was well begun, with excitement and appreciation in the air. We were in the magical world of music. The atmosphere was killed, however, by a speech. At least that’s the way I saw it, or felt it, or heard it. Out came Gilbert with a microphone. He handed it to Anthony Cheung, an American composer who had supplied the next piece on the program.

He gave a dull speech, too. I thought of something that Lorin Maazel said in an interview with me some years ago. (Maazel was Gilbert’s predecessor as music director of the Philharmonic.) We were talking about this issue of “reaching out” to an audience by talking to it from the stage. “You’re not popularizing anything,” he said, “you’re denigrating it. Music has its place because it’s a language” all its own. Thoughts in music “cannot be verbalized. The moment you verbalize anything,” you’re finished.

Maazel continued, “It’s like a guided tour through a picture gallery. I’ve seen the greatest pictures destroyed in three minutes of description. The point is taking something you cannot express in words.”

Hear, hear. But Maazel is yesterday’s news, and we’re all hip to the beat now. Talking is where it’s at. Maazel is merely a great musician, hardly suited to today’s biz.

Nothing that Anthony Cheung said in his speech was unavailable in the evening’s program notes. Time was, you could read the program notes or not. You could read them before, during, or after a concert. It was your choice. Today, the notes are recited to you, whether you like it or not.

Incidentally, here is a statement by Cheung, quoted in the program notes: “I think we’re in an exciting time where so many of the sonic characteristics that once connoted acceptance within a clearly defined aesthetic have been lifted, recontextualized, and reinvented, and that there isn’t a taboo surrounding their reappropriation.”

It’s one thing for composers to invent their own musical languages. But their own Englishes? “Recontextualized”? “Reappropriation”? Who teaches people to speak this way?

Cheung would have been better off letting his music do the talking. His piece, Lyra, proved far better than his speech, or the above-quoted statement. As the title suggests, the piece has to do with Orpheus and his lyre. It is woozy, a wash of sound, broken up by staccato exclamations and other surprises. There is something like rattlesnake percussion at some point. The music zooms and surges. Often it is beautiful and beguiling. Moreover, it is fascinatingly orchestrated—was that a human voice I heard toward the end? Recorded? (Maybe Cheung should have mentioned it in his speech.)

I’m afraid, however, that Lyra cannot quite bear its length. In a review last week, I quoted Earl Wild (the late pianist-composer-arranger), and will again: “Music ought to say what it has to say, then get off the stage.” But I accord Lyra very high praise: I would like to hear it again.

Of Beethoven’s Concerto No. 4, I could give a blow-by-blow, but will say just a little. The opening G-major chord is hard to get right. The pianist must make all the notes sound, and each note must be accorded its proper weight—with the B standing out on top. Sounds like child’s play, but professional pianists often mess it up (in part because they have not touched the keyboard yet, in this concerto). Bronfman handled it near perfectly.

In the middle movement, the orchestra suffered from some disunity. Also, its pronouncements were slightly too bouncy, for my taste (and Beethoven’s?). Readers may recall something I wrote about Mariss Jansons, who conducted the Bavarian Radio Symphony Orchestra recently in this concerto: “I winced in the middle movement . . .: Jansons had the orchestra’s statements choppy, bouncy, and periody. Et tu, Mariss? Have you thrown in the towel and joined the crowd?” Gilbert and the New York Phil. were not that extreme.

In this movement, Bronfman could have sung out more, but he played his music with notable sensitivity: I heard notes I had never quite heard before. That is, they were emphasized, but not obtrusively.

When the music was in one of its quietest, most sublime moments, a cellphone went off. The ring seemed to be a merry Caribbean tune, played on a marimba.

About the closing movement, the Rondo, I will make three points: A higher dosage of playfulness was in order, as in the C-major rondo. But the evenness of Bronfman’s trills—long trills—is astonishing. And Gilbert gave the final pages great vigor and rigor. It was terribly exciting, the end of this rondo.

The audience clapped and clapped, obviously wanting an encore. But Bronfman didn’t offer them one. It’s odd to end an orchestral concert with a solo piano piece, though it has happened before. What might an encore have been? I nominate the last movement of a Beethoven G-major sonata: the Vivace from Op. 79.

I will repeat that Yefim Bronfman is made for Beethoven (as for other composers). And I will repeat an opinion I have given in pieces past: Bronfman should record the 32 sonatas, whether a label wants them or not. He should simply do so in his living room or wherever. The recordings would reach the public sooner or later, by hook or by crook, and posterity deserves them.