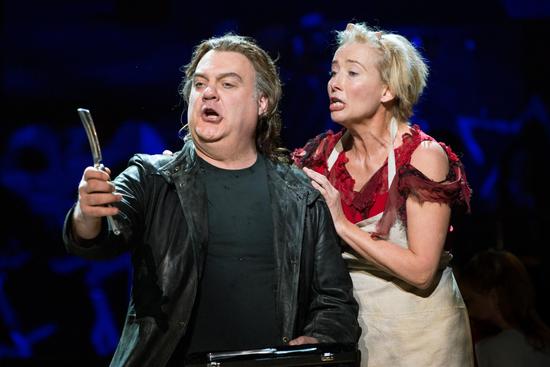 Every now and then, the New York Philharmonic throws a musical at you. On Friday night, they threw Sweeney Todd, the Sondheim hit (or one of several such hits). The Philharmonic had performed Sweeney before—in 2000, with a mixture of classical and Broadway singers. In the former camp was Heidi Grant Murphy. In the latter camp was Audra McDonald, who portrayed the Beggar Woman. She was back in that role on Friday night.

The title role, Sweeney, was taken by Bryn Terfel—who was originally scheduled to sing the part in 2000. In the end, it was taken by George Hearn, the Broadway star. Last week’s Mrs. Lovett was one of the greatest actresses of our time: Emma Thompson. Can she sing, too? Yes, she can. Who knew? Not me, for one.

At the beginning of the evening, the singers trooped out as though they were going to give a concert performance—in formal clothes and holding books. But they soon threw down their books and mussed their duds, launching into a nearly full-on production.

It was shocking, I must say, to hear Terfel amplified—miked. There was heavy amplification in this show, as there is in America at large. Overamplification is a curse of our time, I think—on Broadway, at wedding receptions, and elsewhere. You’ll be in a little restaurant with a flat roof, and there’ll be a little musical ensemble—which thinks it has to be heavily miked. No one cares, evidently. Indeed, they seem to like it.

I noticed something odd on Friday night: Someone would sing while traversing the stage. But the sound would still be coming from the same spot—not traveling with the singer. This confused me (and maybe I was wrong about the sound).

The production was by Lonny Price, same as in 2000—different production, however. This one was brilliant. (I cast no asperions on the previous one; it’s simply that I didn’t see it.) The show was fast and smart. In almost every moment, it was eye-catching. A kettle drum served as a table. A trombone served as a grinder—the grinder, the one in which the murder victims are ground, three times smooth. Every time Sweeney killed someone, a large, red, bloody handprint on the back wall lit up.

Sweeney Todd must be one of the darkest roles in musical theater, and here Bryn Terfel has a problem, I think. Many years ago, I heard and saw him as the Four Villains in The Tales of Hoffmann. My problem was, he was just so likable. Hardly villainous at all. Terfel, I have long maintained, is the most likable human being in music. Everyone loves him—men and women alike. (This is relatively rare, I believe.)

Was he horrifying enough as Sweeney? Yes, he was—but likable nonetheless. He can’t help it. As for his singing, it was wonderful: glowing, accurate, explosive, tender. He is one of the most natural singers we have ever heard. Furthermore, he can act—better than opera-act.

Thompson, of course, is a world-beater. She was thrillingly vivid. You couldn’t take your eyes off her. Speaking of which: Should Mrs. Lovett really be so attractive?

I won’t remark on the entire cast, but just a few more—starting with Audra McDonald. It was interesting to hear her put on a kind of English accent. And to see this glamorous woman turn into a crazed, vulgar, begging wretch. She is indeed an actress, and a game one. Sometimes, when she sings, she sounds like a singer imitating a Broadway singer. But she has done all right in her career without taking lessons from me.

Jeff Blumenkrantz was the Beadle, and he exhibited what I can only call a loose sinisterness—a happy, Dick Van Dyke-like villainy. It was very effective. Erin Mackey was in the Heidi Grant Murphy role of Joanna. She may be a Broadway singer, and I’ve never heard her unmiked, but she is also a real-live lyric soprano. A tenth-grader from Norwalk, Connecticut, was Toby. His name is Kyle Brenn, and he was winsome in his Dr. Dulcamara act. (Toby peddles a miracle drug à la the “doctor” in The Elixir of Love.) All through Sweeney, he was both earnest and endearing.

The Philharmonic’s music director, Alan Gilbert, conducted—with an admirably sure sense of pacing. Not a tempo seemed misjudged. And he obviously understood the dynamics of the show, by which I mean, not forte and piano, but emotions.

A question: Why does the Philharmonic do this? Why do they put on musicals periodically? I don’t know, but it can’t hurt—including the bottom line.

The audience seemed to be dotted with celebrities. I say “seemed”: Was that Angela Lansbury, the original Mrs. Lovett? I think so. Was that Benedict Cumberbatch, the actor who plays Sherlock Holmes? Pretty sure. Was that Gary Oldman? I may be off on that one, but there was at least someone who looked rather like him.

Listed in the “ensemble,” by the way, was a Sam Tebaldi. I always wanted to hear Tebaldi, in the flesh. I’ll have to settle for Sam.