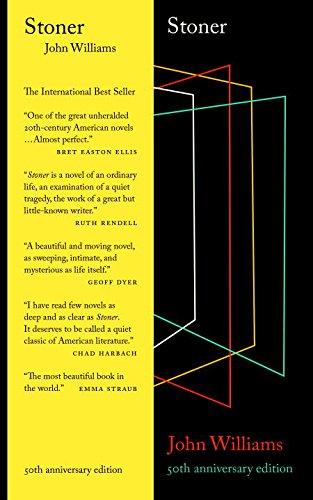 A half century after publication, John Williams’ Stoner has been reissued in hardback by the New York Review of Books, accompanied by some 20 pages of correspondence between the author and his agent Marie Rodell.1 That Stoner endures at all, let alone in a fiftieth anniversary edition, is somewhat remarkable. The novel struggled to find a publisher, had an unimpressive initial run of 2,000 copies, and quickly receded from public view. Stoner remained largely unnoticed until it was reissued in paperback in 2003, also by NYRB. A French translation by Anna Gavalda gained enormous popularity across Europe, leading the novel to become a bestseller for the first time in its 40 year history.

Now Stoner has become a critical darling, praised by the likes of Julian Barnes and Ian McEwan. If the novel has gone under-appreciated for most of its existence—and it has—one must also recognize the tremendous corrective effort taking place. Bret Easton Ellis referred to Stoner as “one of the great unheralded 20th-century novels.” Emma Straub called it “the most beautiful book in the world.” In perhaps the most effusive case, Morris Dickstein at The New York Times wrote, “‘Stoner’ is something rarer than a great novel—it is a perfect novel, so well told and beautifully written, so deeply moving that it takes your breath away.” The list goes on.

Stoner tells the story of William Stoner, born 1891 in rural Missouri. He enters the University of Missouri in 1910, quickly changes his course of study from agriculture to literature, and stays at the university as an assistant professor until his death in 1956. At home he is besieged by a disastrous marriage to the frigid, manipulative Edith; at the university he faces bitter rivalry with not one, but two sinister hunchbacks. Stoner’s life is one of near-constant hardship, which he navigates with a quiet stoicism that defines both character and novel. In the school of poor metaphor, William Stoner is Rocky Balboa, taking blow after blow but just trying to go the distance.

In the novel’s opening lines, we learn of the protagonist’s ultimate fate:

Stoner’s colleagues, who held him in no particular esteem when he was alive, speak of him rarely now; to the older ones, his name is a reminder of the end that awaits them all, and to the younger ones it is merely a sound which evokes no sense of the past and no identity with which they can associate themselves or their careers.

The message is clear: William Stoner will achieve little and be remembered less. More than simply bleak, this prognosis has a practical effect on the reader. Our foreknowledge amplifies the hills and valleys of Stoner’s life, imbuing the story with a lingering profundity that bleeds through Williams’ economical prose. This persistent, subtle depth is largely why the novel succeeds. Williams need not reach for meaning—and indeed he categorically refuses to be sentimental—because his characters and their interactions speak for themselves.

Nor does the author make William Stoner a moral center. There is no good versus evil in Stoner, only flaws, vulnerabilities, and the characters who possess them. Stoner’s wife is no monster, only an incognizant woman marred by a repressive childhood (the description of Edith’s upbringing is one of the novel’s high points, including, among other gems: “her moral training, both at the schools she attended and at home, was negative in nature, prohibitive in intent, and almost entirely sexual”). When Stoner does find love, it is not in reconciliation with his wife, but in an intense but fleeting affair with a graduate student. There is no great catharsis in Stoner’s life, nor in his relationships. There are only attempts at understanding, with varying degrees of success.

With respect to Mr. Dickstein, Stoner is not a perfect novel. Up through much of the story’s first half, the protagonist is so passive as to be lackluster. Like Pip Pirrup in Great Expectations, Stoner is both led to water and made to drink (incidentally, Edith shares a number of less-desirable traits with Estella and Miss Havisham both).

More glaringly, the author has evident difficulty trusting his readership, particularly in his use of symbol and metaphor. In a phrase, Williams is heavy-handed. Stoner’s adversaries are marked by physical deformity. His affair is consummated not just with any woman, but a young, beautiful genius so docile and sympathetic that she approaches the unbelievable.

Then there is the case of Dave Masters and Gordon Finch, Stoner’s fellow graduate students. At the outbreak of World War I, Finch and Masters enlist, while Stoner defers to continue his studies. Shortly thereafter, Stoner learns of their fates. Dave Masters, among the first Americans to see action, is killed almost immediately in France. Gordon Finch, whose service takes him to New York, is able to continue his education at Columbia University, where he receives his degree the very same week as Stoner (recall that Stoner attends the University of Missouri at Columbia). The dichotomy between Finch and Masters is captivating, particularly in showing what might have been had Stoner enlisted, but it is so perfectly neat that it cannot reflect real life. Williams is more than a smart writer, he is a deliberate one. In this case, he is deliberate to the point of distraction.

Stoner is a captivating and well-told story, rich in human struggle and persistence. It is deserving of all but the most hyperbolic praise (one wonders what a “perfect novel” might look like, and if such a thing could exist). The republished edition’s inclusion of correspondence between author and agent is enlightening.  We learn, for instance, of extensive rewrites to the novel’s first third, perhaps an explanation of Stoner’s passivity in those pages. It also becomes clear that Williams had terrible taste in titles (he first presented “A Flaw of Light,” then lobbied for “The Matter of Love,” and confessed “everything I come up with sounds like a soap opera”). When John Williams wrote to Marie Rodell in June 1963, “The only thing I’m sure of is that it’s a good novel; in time it may even be thought of as a substantially good one,” he couldn’t have known how right he was. Some fifty years later, Stoner is heralded by many as a masterpiece, and rightfully so.

Adam I. W. Schwartzman is the founder of LiveWrite. He teaches writing in New York City jails.