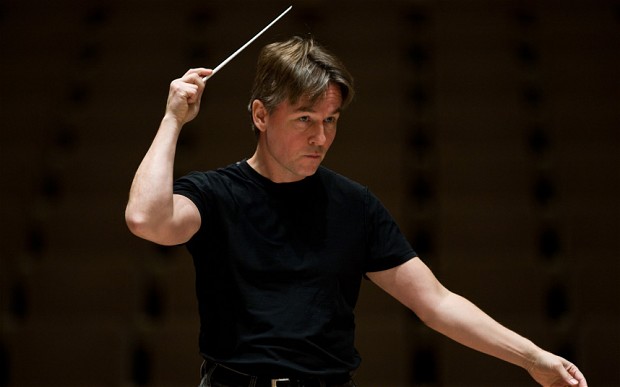 On Thursday night, the New York Philharmonic had a guest conductor: Esa-Pekka Salonen, the veteran Finn. They began with Beethoven: the King Stephen Overture. The brass did not quite begin together. Plus, they made an ugly sound. They did better their second time around—both in togetherness and in sound.

Reviewing a concert of the Philharmonia Orchestra conducted by Salonen last summer at the Salzburg Festival, I wrote,

You may know the rap against Esa-Pekka Salonen: cold, hard, and fast. I have rapped this rap many times myself. Salonen has often conducted with his fist clenched (not literally). In recent years, however, I have sensed that he is unclenching his fist.

You know what this King Stephen Overture was like? Cold and hard, if not unpardonably fast. It was like “old Salonen.” But it was good, as he was, always—even in his coldest, hardest, fastest days.

In the Beethoven that followed, he was absolutely superb. This was the Piano Concerto No. 1 in C major. In the opening of the first movement, Salonen was graceful, crisp, and judicious. The music was sculpted just right. Later in this movement, he was heroic, like Beethoven. He had energy, but he was not frenetic. This was a model of Beethoven-conducting (Abbado-like, I would say).

The soloist was Jeremy Denk, a fine pianist. He is always worth hearing. I doubt he would ever be without a case to make. With that out of the way, let me pick on him.

In this first movement, he rushed. He was also flippant. He clipped his notes. Some of his passagework was muddy. His sound was often brittle. Tempos, when he could set them, were unwisely fast. It occurred to me he may have been nervous.

Did he do anything right, in my censorious view? Yes: Some downward C-minor scales were excellent.

Regular readers have probably heard me say, “No fair lookin’”—no fair making too big a deal out of how a musician looks when he plays, conducts, or sings. What counts is the musical results. In the music biz, there are many types. Some people are economical and restrained (in their physical movements and expressions, I mean). A prime example of this type would be Heifetz. At the other end of the scale, you have, say, Maestro Salonen’s fellow Finn Olli Mustonen, the pianist.

Denk is on the Mustonen end. But, as I say, no fair lookin’.

In a public interview with me last summer, Christoph Eschenbach gave a stirring defense of Lang Lang, the Chinese pianist (who really shouldn’t need a defense, frankly). He said that people marked him down because of how he looks at the bench. That is true. And they should not.

The middle movement of the Beethoven, the Largo, Denk and Salonen swept through nicely. They could have savored the music more. Denk did some lovely playing. There ought to have been more warmth in the orchestra.

And how about the Rondo, that playful, delightsome thing? It was neither playful nor delightsome: From Denk, it was super-fast, hard, and aggressive. The music was robbed of its essential nature, in my opinion. Besides, Denk committed some strange accents—banging on pickups, for example. There was strange rubato (though interesting rubato). Denk’s playing of this movement made me nervous. And not in a good way.

As you can tell, I was not crazy about this performance. But the audience was. And I understood their point of view. Denk is an interesting, skillful, creditable musician—a musician with something to say. I look forward to my next chance to hear him.

After intermission, the Philharmonic played Stravinsky’s ballet The Firebird, complete. Salonen was first-rate in it, and so was the orchestra. Salonen conducted with intelligence and care. This conducting was disciplined but not confined—it was free within discipline. It was both strict and imaginative. It was like the score (whaddaya know?).

And, man, was this performance exciting—exciting as hell. Salonen was wired, brilliant, electric. Not long ago, I heard a Firebird that was perfectly correct but flat—dull. It lacked a je ne sais quoi. The quoi was in this Salonen performance.

At the end of my earlier-quoted review last summer, I wrote,

This was a great concert—and I don’t say “great” casually. Furthermore, Esa-Pekka Salonen has become one of the conductors I most esteem. There are few I would rather see on a podium. It was not always thus. Who changed, him or me? I vote him, but I can’t be 100 percent sure.

Yes. And let me add a footnote. Throughout The Firebird, a hearing aid sang and pierced. Nothing is more disruptive in a concert. Last April, I wrote about concert-hall sounds: plastic bags, teeth-sucking, the unwrapping of candies, and a hundred other things, including

. . . hearing aids! I think they may be the worst—faulty hearing aids. The wearer can’t tell that the aid has gone haywire. The devices sing and pierce. I feel sorry for the wearer—he has done nothing wrong, but his device has.

On Thursday night, a Philharmonic usher roamed the aisles, looking for the culprit. I don’t think he ever found it, or him, or her. A pity. But not even this hearing aid could spoil Salonen’s Firebird—or Stravinsky’s.