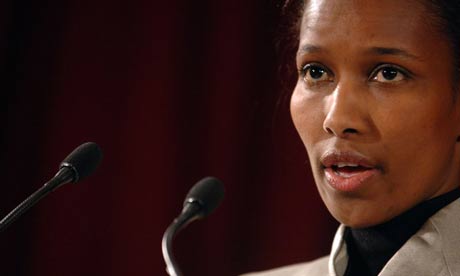 At 7:00 pm this evening, Ayaan Hirsi Ali is scheduled to present a lecture on the “Clash of Civilizations: Islam and the West” at Yale University as part of the William F. Buckley, Jr. Program’s speaker series. We say scheduled, of course, because of the circumstances surrounding the event.

Hirsi Ali is a Somali-born activist, writer, and politician; a former Muslim known for her women’s rights advocacy and critical remarks about Islam. She has served in the Dutch parliament, received awards for her moral courage, commitment to democracy and support of free speech, and was ranked by Time magazine as one of the 100 most influential people in the world under the category of "Leaders and Revolutionaries." Nevertheless, Yale’s Muslim Students Association (MSA)  has described her statements and positions as “hate speech,” “libel,” and “slander” worthy of condemnation. They feel “disrespected” by her very invitation to Yale’s campus. The group has asked for Hirsi Ali’s invitation to be rescinded,  for her to be prohibited from speaking about Islam, or for the addition of a second speaker with more credentials to provide a “more balanced” talk.

Last week, representatives from thirty-five campus groups and organizations signed a letter drafted by the MSA expressing concern over the event.  In the days since, several organizations have withdrawn their signatures, claiming that they never gave full support. The lecture will hopefully proceed apace.

We at The New Criterion have been following this debate with great interest. Is it déjà vu? In our May 2014 issue (and again, briefly, in June) we discussed Brandeis University’s revocation of an honorary degree for Hirsi Ali, which the Buckley Program noted was part of their motivation for inviting her to speak on Yale’s campus:

“We have often had occasion in these pages to remark on the irony that the “free-speech movement,” which began in 1964 in the tumult of Berkeley, has over the years mutated into something close to the opposite: an anti-free-speech movement. It is not at all uncommon, on our nation’s campuses, to find academics decrying academic freedom in the name of a putative higher virtue […]

The metastasis of illiberal liberalism beyond the protected purlieus of academia is one of the signal cultural deformations of our time. What it tokens is nothing less than the potential eclipse of that robust understanding of liberal society that has informed the self-understanding of Anglosphere society from the time of Runnymede. At its core stand the ideals of free speech, religious liberty, and equality before the law.

[...] The new illiberal liberalism prattles on about tolerance and diversity, but it practices intolerance and demands conformity whenever it is challenged.”

As legal concepts, libel and slander fall under the umbrella of defamation—false statements of fact that expose the victim to hatred, ridicule, or contempt, cause them to be shunned or injure them in business or trade. Even statements that could be perceived as offensive, however, are not defamatory.  Hate speech should not merely mean “what you said has hurt my feelings,” and indeed, in such a case the best remedy is more speech—not less. Censorship, which is appears to be the MSA's intention, is the suppression of ideas; rarely has it led to an increase in the common good.

Universities have historically been sites for vibrant discussion and free exchange of thought, and silencing debate would be a tragedy.  As we write, the majority of Yale’s students and administration still remain committed to supporting free speech on campus. Let's hope that they continue to do so.