Video killed the ballet star. At least that’s the impression we got watching the many attempts over the past year at translating the ballet stage to the computer screen. Iced out of the David H. Koch Theater, last fall New York City Ballet tried to turn up the heat for the final week of its digital fall season with five video premieres. To its credit, the pre-recorded programs gratefully brought ballet out onto the streets. Coming home from the office one evening, I happened to see one of the works in production, with the principal dancer Taylor Stanley moving fluidly, then spastically, as if suddenly possessed, as he stood up from a bench in Riverside Park.

The joy of seeing live dance—even just a few seconds of it set to recorded music—seemed far removed from the treacly, overedited final product that ensued. Created by Justin Peck, with Jody Lee Lipes as the director of photography, that sneaker ballet became just another Nike ad, in this case set to Chris Thile’s earworm of a tune called “Thank You, New York.” Really, no thanks. Another reason to pack up and move to Texas.

Despite the talent of their choreographers and dancers, the other four works fared little better. The problem was the overly redolent filmmaking by Ezra Hurwitz and cinematography by Jon Chema. In Andrea Miller’s “new song,” set to music by the executed Chilean singer Víctor Jara, the perfume was at its fullest, and was in fact quite evocative. But ballet does not need quick cuts, smokey closeups, and lens flares. Just let dancers dance.

With its new spring initiative, City Ballet has learned from the mistakes of last fall. The mandate to let dancers dance is what makes choreographer Kyle Abraham’s latest video premiere, called When We Fell, so compelling. Developed with eight City Ballet dancers during a three week residency—“COVID-compliant,” we are assured—at the Kaatsbaan Cultural Park in Tivoli, New York, the ballet offers a haunting return to form. Co-directed by Abraham and the cinematographer Ryan Marie Helfant, When We Fell captures the performers in 16-millimeter black-and-white film as they move across the Koch Theater stage and, even more affectingly, Philip Johnson’s mezzanine. Now the cameras are static, often fitted with a fisheye lens, so that the point of view resembles surveillance footage switching intermittently among feeds. In the otherwise empty theater—empty of all of us for far too long—the work feels like “night at the ballet,” or day at the ballet, with the ghosts of dance filling the shadows.

But of course, the Koch theater has not been entirely vacant this past year. Those colossal marble statues, enlarged by Lincoln Kirstein from tiny figurines by Elie Nadelman, have kept watch over the hall. With bodysuit costumes by Marc Happel, in When We Fell the dancers arrive as marble halfway made flesh. In her pantomime poses, the soloist Claire Kretzschmar enters the scene as a Nadelman sculpture herself, at times come to life, at others returning to the cold stone of the space. 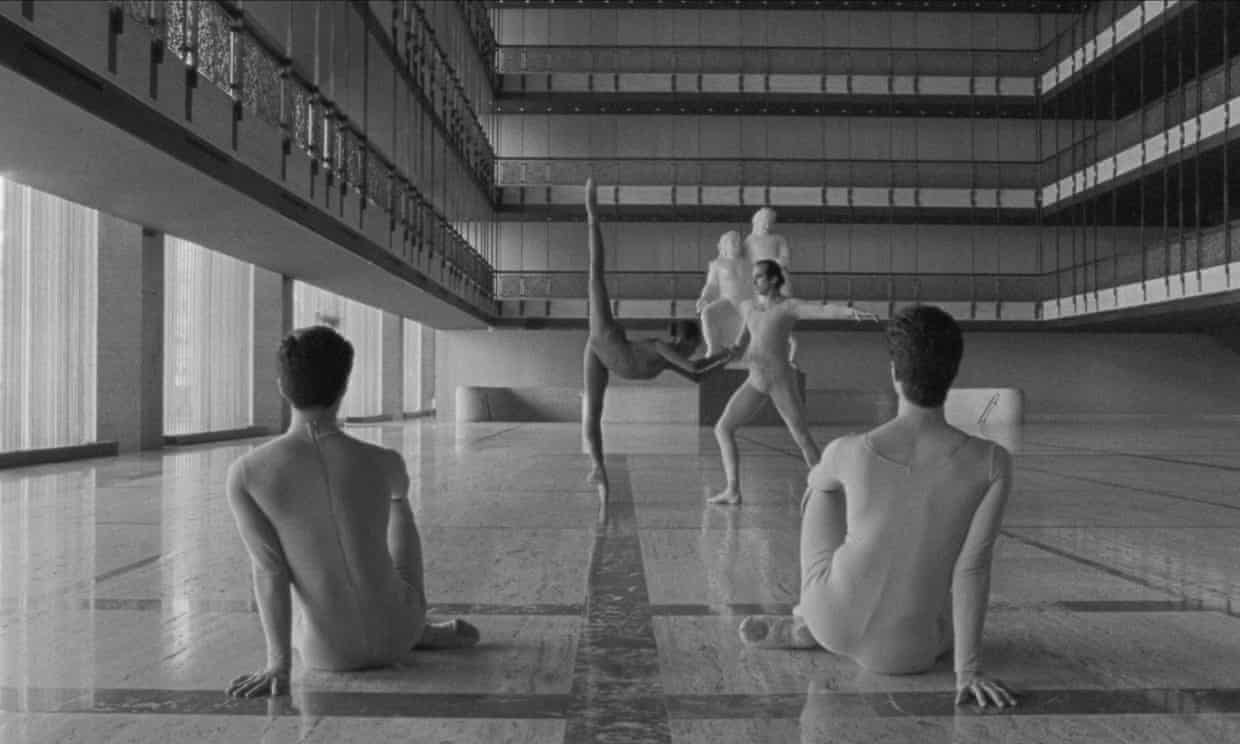 Captured at various angles, this ballet, which remains available for streaming through Thursday, makes the most of the rigid geometries of the mezzanine’s architecture. The dancers move like chess pieces across the gridded marble floor. They watch one another. Then they freeze in position, as when the corps dancer India Bradley pauses in penché. Taylor Stanley is most adroit at incorporating Abraham’s liquid breakdancing flow with the Balanchine technique—two dance traditions that are not so far removed as one might imagine. Done right, the hip-hop dancing looks like ballet in reverse, with movement made strange, popping and melting down. The opening music of “Piece for Four Pianos,” by Morton Feldman, adds to the odd emptiness as it seemingly reverberates through the vacant theater.

We should not expect such ballet, at moments like this, to resolve into the Nutcracker Suite. And indeed, as Abraham’s sixteen-minute work continues, it shifts from the mezzanine to the Koch Theater stage, with dancers now overanimated by the cacophony of Jason Moran’s “All Hammers and Chains,” which sounds as advertised. As the performers dance past one another, an abundance of cabriole leaps and fouetté turns by the apprentice KJ Takahashi resolves into a pas de deux. Now the lighting designer Dan Scully shines a backlight on the principals Lauren Lovette and Taylor Stanley and it seems as if we observe them from offstage. Nico Muhly supplies the music, titled “Falling Berceuse,” for this elegiac coda. Finally the camera zooms out to reveal dapples of light that turn out to be the faceted lamps of the Koch auditorium, so well known, but here become strange. Created during a snowy residency in upstate New York, When We Fell captures that eerie, snowbound feeling of a year in frozen isolation.