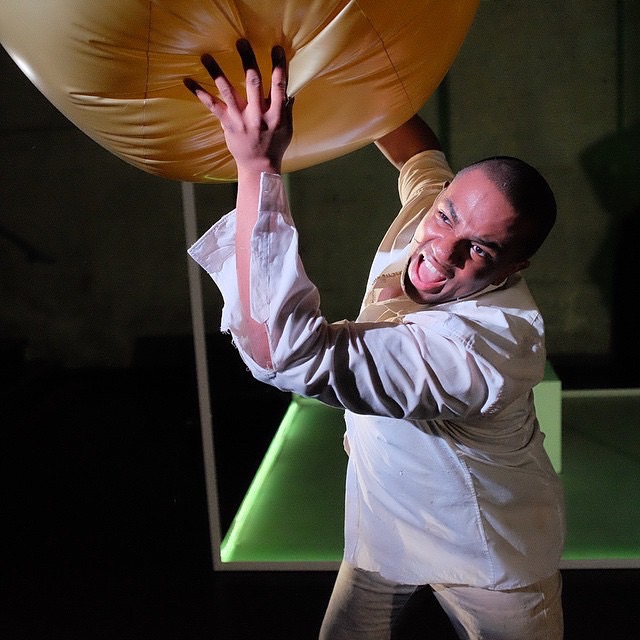 Vince B. Vincent in Sisyphus; photo by Reuben Radding

I won’t attempt to give you a plot summary of Sisyphus, an opera I attended last Friday, if only because a linear plot isn’t part of the creative team’s objective. The titular mythological figure is represented, albeit as a self-obsessed club kahuna. Present too is the nymph Aegina, whose fling with Zeus, given a flippant treatment at first, later serves as the basis for the opera’s brightest poetry. In the corner alone is Brianna, an artist struggling almost as much to find inspiration as she is to find romance. All of these scenes fit together somehow, though the exact configuration is neither clear nor terribly important.

Sisyphus is the latest project of Experiments in Opera, a small company that performs in the Abrons Arts Center on the Lower East Side. Jointly created by the group’s three artistic directors (Jason Cady, Aaron Siegel, and Matthew Welch), the fifty-some-minute chamber opera is an endearing piece, featuring a witty, fresh libretto brought to life by a trio of impressive young singers in various roles.

The score, which calls for cello, double bass, vibraphone, and modular synthesizer, in addition to the singers, has a tendency to fall into certain common traps of contemporary composition. The most egregious of these comes in a pair of dialogue scenes, one a conversation at the gym, the other a planning session for a bank heist. The characters here mostly sing back and forth on a minor third, with an occasional fifth on top thrown in to spice things up. As a way of creating a sort of modernist recitative-equivalent, this might be intentional. It is also dull.

When flexing their melodic muscle, though, the composers create spacious, arching lyricism that fits the soaring poetry of Aegina’s (or rather, the teenaged Aegie's) ruminations on the flight of the eagle (sung with an easy, sweet warble by Lucy Dhegrae). Elsewhere, the jagged, manic lines fit perfectly over the spiky text of Brianna’s obsessive episodes (more on her later). Sisyphus (played by the brassy-voiced tenor Vince B. Vincent) reaches his greatest passion in a tormented monologue during which he throws his boulder (a giant inflatable ball) about the stage and into the audience. The judicious but effective orchestration was admirably performed, especially by the cellist, Meaghan Burke, whose recurring frantic arpeggios created a sense of constant motion.

Ethan Heard, the production’s director, shows a keen understanding of the work’s substance in his staging. With the orchestra along the back wall, he divides the space into three main playing areas. Stage left presents Aegie's bedroom, where a computer monitor facing the audience gives us a glimpse into the young woman’s imagination with videos of eagles on the wing. The center of the stage, in front of the ensemble, is left open, providing a versatile playing space for a variety of scenes.

Heard’s most brilliant touch is his treatment of Brianna, who spends the entire opera alone in a cage stage right, with implied blank walls on all sides, furnished only by a smaller cube in the center. Trapped in a prison of her own imagining, she approaches a state of mania in fevered moments of inspiration, attacking the imaginary wall with violent brush strokes as the lighting (designed by Masha Tsimring) cycles rapidly through an array of colors. Her only contacts with the outside world, a bizarrely ecstatic delivery order and a series of awkward Tinder messages, elicited sympathetic groans and knowing laughter in equal measure. Kate Maroney’s performance as Brianna was transfixing, her assertive sound matching the high-pitched intensity of her character.

When the New York City Opera finally ran down the curtain in 2013, talk in the musical world revolved around what might replace it. A new company on the same scale seems unlikely in the immediate future, but we have seen instead the flourishing of smaller outfits devoted to presenting rare and experimental works that, for practical reasons, lie outside the scope of large houses like the Met. Launched in 2011, EiO has quickly become a vital part of that subculture, testing boundaries and changing the way we think of opera as a genre.

Eric C. Simpson is a music critic and violinist. He is Chief Development Officer at the Paideia Institute.