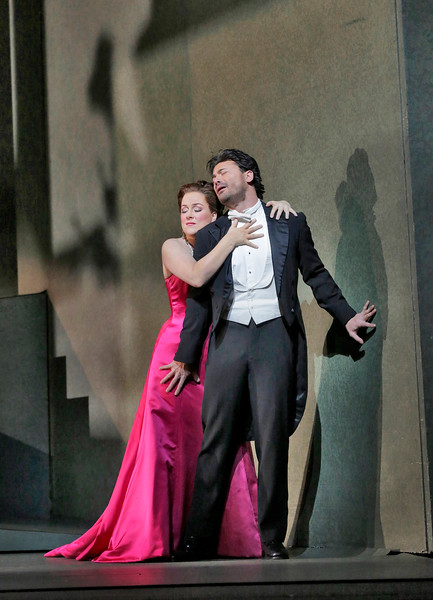 Diana Damrau in the role of Manon and Vittorio Grigolo as Des Grieux; photo by Ken Howard

Last night, the Metropolitan Opera presented Massenet’s Manon, not to be confused with Puccini’s Manon Lescaut (same story, same girl). What you need for Manon, first and foremost, is a Manon—which can be tricky.

She must be a soprano who is light, agile, powerful, and dramatic. Good luck.

Last night’s Manon was the splendid Diana Damrau. To get the bad news out of the way: She was too small for the part. Too often, I couldn’t hear her. This was true even in the delicate aria “Adieu, notre petite table.”

But as Damrau herself once told me in an interview, “Your voice is your voice. You can’t go to the store and buy another one.” And Damrau has a marvelous voice. It is well worth straining to hear, if you have to.

It is flexible, sinuous, bendy. She can bend it like Beckham. Damrau’s voice is still fresh—but I will tell you this: For the first time, I heard her shrill and thin on high notes. (This was in the Gavotte.) But such blemishes were of little significance.

Damrau certainly knows how to act the part. Manon goes from ingénue to vixen to tragedienne. Damrau is occasionally a bit hammy, but this is better than bland or sleepy.

Whether in recital, concert, or opera, she has her “special ingredient,” as I have long called it: adorability. In the Saint-Sulpice duet, Manon sings, “Is my voice still a caress to you?” Always, Diana.

Her Des Grieux was Vittorio Grigolo—who poured beauty all over the house. That voice is loaded with sun, as if perpetually ready to burst into “Dein ist mein ganzes Herz!” (or “O sole mio”). Grigolo was a model of romantic exuberance. He was completely believable as the smitten, idealistic youth.

Let me stress something about his voice: It is loud. Lyrical, unforced, and loud. He sometimes sounded miked. He and his Manon made a mismatch in volume. But in other respects, they matched.

Running off to Paris, they ran up a longish flight of stairs, holding a B flat—and that note held, from both tenor and soprano.

I don’t know how you like your “Rêve,” but I like it fairly neat and Classical. Fairly straight, Schipesque (by which I mean, in the manner of Tito Schipa). From Grigolo, it was swoony and all wrong. But it was completely sincere and therefore right (sort of).

I thought he would be terrific in “Ah! Fuyez,” where you can let it all hang out. But even here he was vulgar, stylistically. Still, what a voice, and what a heart. Both were made for opera.

Speaking of being made for opera: Re-seducing him in the church, Manon stripped bare his torso, revealing beefcake. Isn’t beefcake supposed to come from baritones?

Speaking of them: There are two baritones in this opera, namely Lescaut and Brétigny. Those parts were filled by Russell Braun and Dwayne Croft—who are a lot alike. They are dependable, consistent, and beautiful-voiced. They are total pros.

It may seem like I’m damning them with faint praise, but this is not so. A beautiful-voiced total pro is worth his weight in gold.

In the part of Des Grieux’s father was Nicolas Testé, a French bass-baritone. To my knowledge, I had never heard him before. He has an enviable instrument: sizable and gleaming. On this occasion, however, he was a bit tight.

Presiding in the pit was another Frenchman, Emmanuel Villaume. He conducted with intelligence and commitment. Even in Massenet’s less inspired stretches—zzzzz—he conducted as if it mattered, a lot. The orchestra played well for him. Brass players were gratifyingly unblaring and unstumbling. The principal clarinet was a gratifying soloist.

The Met’s production is by Laurent Pelly, and I reviewed it when it was new (here). Last night, I found the Cours-la-Reine scene a treat. It looks Toulouse-Lautrecky. And it turns Manon into Dolly Levi. I still can’t explain that big basketball in the back, but I kind of like it.

Pelly is not only the director of this show, he is its costume designer. Those costumes are entirely fitting (in any sense you like). One of the girls, at the beginning, is in magnificent green. Last night, I thought, “Ah, St. Patrick’s Day.” There was plenty of green in the audience too—festive.