There are a handful of modern artists whose signature works are so distinctive that to approach them stylistically is to get yanked into their orbit. Joseph Cornell’s dioramas come to mind as an example—not even Marcel Duchamp could collage thrift-store findings behind glass without evoking the work of his friend. The unfortunate side effect of this distinctiveness is that such artists produce no stylistic heirs, only lesser copyists.

One could assert, for instance, that David Smith was a better sculptor than Alexander Calder, supported by the observation that Anthony Caro, Peter Hide, and several others nearly as great were able to take influences from Smith and run with them, whereas Calder’s creative output was so particular to him that it closed off the possibility of further development by younger artists. When it comes to the mobile, there is Calder, the Calderesque, utter kitsch, and baby toys.

The Peabody Essex Museum’s catalogue for “Calder and Abstraction”, which is excellent on all counts, notes the late critic Clement Greenberg as someone who preferred Smith to Calder. But he enjoyed Calder nonentheless. “Both [Calder and Stuart Davis] have made modern art cheerful,” Greenberg wrote in 1945:

“... The felicity and taste of these two artists is, as a matter of fact, prodigious. Of the fifty paintings in Davis’s exhibition, no more than three or four actually fail on their own terms; and I was struck by a similar evenness in Calder’s one-man show at the Modern Museum two years ago.”

If it seems a slight to call Calder’s work “exquisite minor art,” as Greenberg did in that essay, he also suggested what to do about Calder and other artists whose tastefulness is so great as to count partially against them: “society [should] give them fixed, exactly defined tasks that require them to fit their cheerfulness and discretion into the general decor of modern life in a systematic way. Let Davis and Calder create an atmosphere in which to move, not solo works of art. These are the examples of Boucher and Fragonard, whose spirit their own resembles.”

“Calder and Abstraction” at the Peabody Essex Museum carries out that advice to the letter. The art on display looks fantastic in both senses of the word.

Installation view of Calder and Abstraction: From Avante-Garde to Iconic at Peabody Essex Museum, Salem.

Renowned contemporary architect Frank Gehry (who might be the closest thing to a major scion of Calder as can be found) designed the LACMA installation from which the PEM installation is derived, and it is a brilliant success. The gallery is all sleek lines, raised white stages, and walls painted in perfectly chosen downy grays. Sculptures are given enough room that one can appreciate their forms, and sufficiently proximal walls that the viewer can admire the elegant shadows they cast. Snow Flurry (1948) is vignetted in a modernist chapel of sorts, with a translucent back wall through which you can see the work’s shadow as you enter the show; it is a fine bit of drama. Curatorial discernment gathers the abstractions into a cohesive whole, while Calder’s playful genius shines forth, and demands prolonged consideration of every object in the gallery. This exhibition proves Greenberg right seventy years after the fact.

It is interesting to contemplate Calder in terms of liberation and constraint. On one hand, the works are unhampered by the requirements of realism: they are carefree in feeling, and they are free to sway in the spaces in which they hang. On the other hand, Calder is known to have taken formal cues from a visit to the studio of Piet Mondrian, and his pieces reflect a similarly restricted vocabulary of shape and color. They are rigorously attuned to physics, and have clearly been made to stand, balance, and turn just after numerous instances of failed experimentation. Inglorious topplings of metal, cardboard, wood, and twine must have been a usual event in Calder’s studio. But the process ultimately resulted in pieces like Southern Cross (1963), in which the rounded trapezoids on either side of the balance seem to have both a relation and yet a different flavor of arrangement, turning serenely on a point provided by a red, insectoid tripod. The play is orderly, and the order is playful. 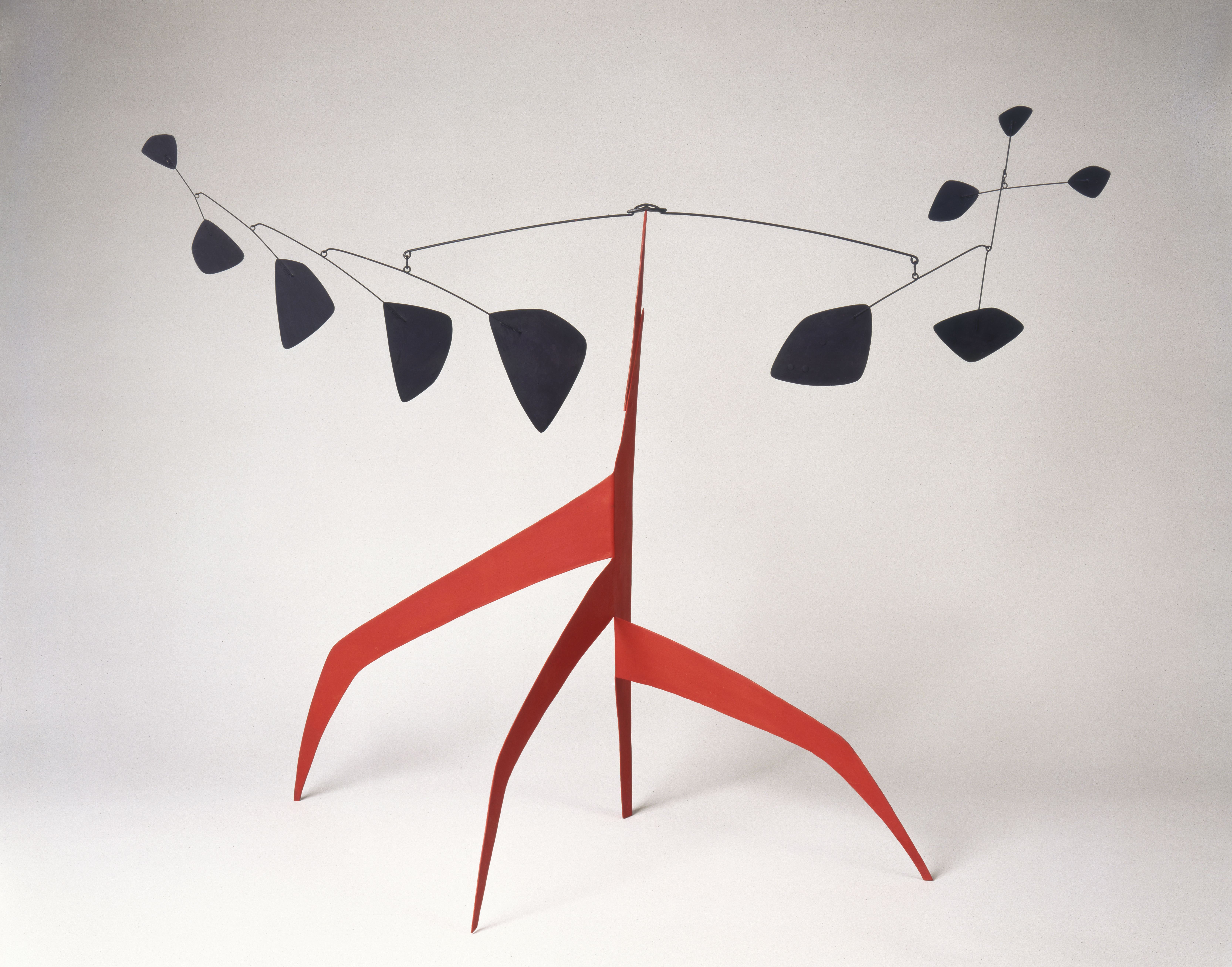 The delight of Calder’s work is its foremost feature. Anyone who doesn’t feel a rise of happiness while looking at Red Panel (c. 1938), in which two friendly shapes hover suspended in front of a sheet of red metal, should check himself for a pulse. That noted, the last room of the exhibition, which goes into his monumental public work from the ‘60s, makes the case that Calder can be regarded in a Smith-like way and hold up to the scrutiny. “Calder and Abstraction” includes a maquette for La Grande Vitesse (1969), and not a tabletop maquette but a monster of bolted steel painted the color of a fire truck. It ought to put to rest any reservations about whether kinesis in Calder’s sculpture is a gimmick. He could do without it when circumstances demanded, and still summon all the grace and charming biomorphism that we associate with him.

Sometimes we art writers are pressed to make predictions about the next important phase of art. My prediction is the phenomenon of worldbuilding. Narrative media like film, writing, and digital gaming seem to be advancing while visual art takes a cultural back seat. The driving force of those media is immersion, so art will be required to compete by building worlds that compel the viewer’s attention, pulling it into an invented universe made convincing through the vision of the artist—“an atmosphere in which to move,” as Greenberg put it. Calder will remain inimitable, but in his ebullient body of work he left us clues about how to create such atmospheres, and the opportunity remains to pick them up and run with them.

“Calder and Abstraction: From Avant-Garde to Iconic” opened at the Peabody Essex Museum in Salem, MA on September 6, 2014 and remains on view through January 4, 2015.

Franklin Einspruch is an artist based in New Hampshire.