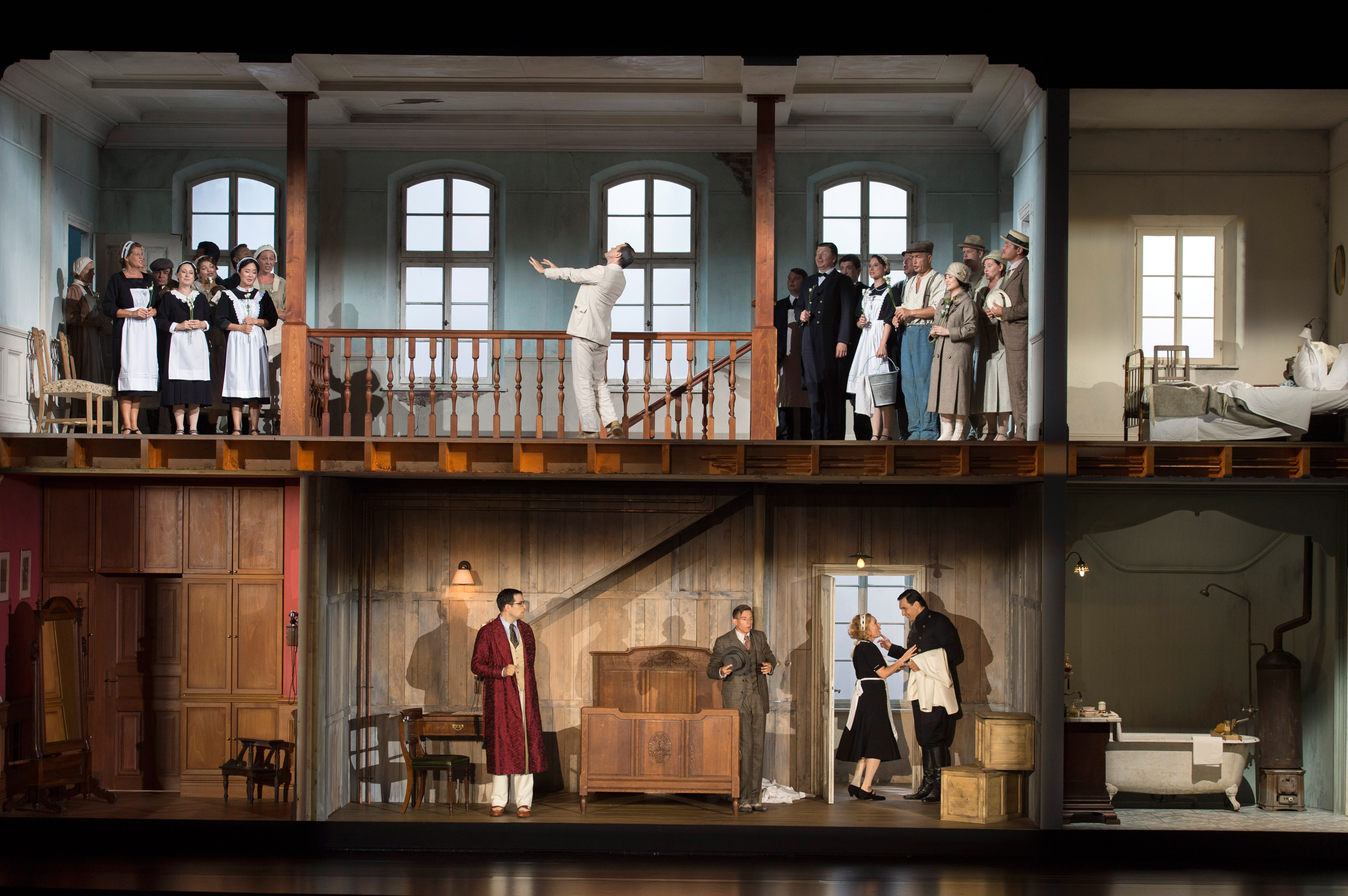 A successful Marriage of Figaro is a very satisfying evening—and that’s what we had at the Salzburg Festival last night. This Figaro was not always sparkling, but it was always intelligent. And it sparkled often enough.

Figaro, even more than most Mozart operas, has a great many components. You can start with a cast of about ten. Not a single component failed last night.

And plenty of credit goes to the stage director, Sven-Eric Bechtolf. He obeyed the rule “First, do no harm.” Beyond that, he did considerable good. But we’ll get to the production later.

Playing in the pit was the Vienna Philharmonic Orchestra, and leading that band was Dan Ettinger, an Israeli conductor. He also provided the continuo, i.e., presided at the keyboard. His fingerprints, like Mozart’s, were all over this performance.

The overture was mediocre, not one whit better. The VPO made a poorish sound. The music lacked its lilt, impishness, and delight. This music is practically the high point of the opera, but it was possibly the low point of the performance—after that, everything bloomed.

At his worst, Ettinger was workmanlike, adequate; at his best, he was inspired. You could argue with his choices here and there: I thought “Dove sono,” the Countess’s aria, was too slow, and unmoving. (Unmoving in more than one sense.) But other parts of the score were excellent, and Ettinger made me notice things in this score that had somehow escaped my attention.

I’ll give you one highlight from Ettinger’s baton: the “wedding march,” as it’s known. It was squirmy and deliciously pompous—kind of sarcastic. What an ingenious little composition this is, in an opera bursting with them.

The title role, Figaro, was taken by Adam Plachetka, a bass-baritone from the Czech Republic. He was explosive, cunning, and very human. In other words, he was a fit Figaro. His “Se vuol ballare” had the appropriate menace. His “Aprite un po’ quegli occhi” was unusually theatrical, and winning.

His Susanna was Martina Janková, a Swiss soprano, but one born in the Czech lands, as you can tell. In her singing, she was forward, pointed; in her acting—as well as in her singing—she was spunky. But she also showed gracefulness in that graceful aria “Deh vieni.”

A little Googling tells me that I have been writing about him since 2003, when he appeared at the Salzburg Festival in two Mozart operas: Don Giovanni (as Masetto) and La clemenza di Tito (Publio). I keep saying the same things about him, and have no reason to stop now.

He emits a beautiful ribbon of sound. His singing is accurate, clean, understanding, and, again, beautiful. It is also sincere. When he sang “Contessa, perdono” last night, he really meant it.

Let me be a little hokey and say that Pisaroni is a singer born for Mozart.

Among his qualities, whatever the opera and whatever the composer, is likability. Extreme likability. Now, the Count is a not very likable character, but in these hands? He was likable despite himself.

Sometimes this Count had a befuddled air, reminding me of Thurston Howell III. Sometimes he had a lanky agility, à la Dick Van Dyke. And when Pisaroni had to bring down the seigneurial hammer, he did.

By the way, the Count plays with a little dog in this production, early on. And he—the dog—was Pisaroni’s own, a pooch named Tristan (thus introducing a Wagner note on this Mozart evening).

The Countess was Anett Fritsch, an elegant German soprano, whose “Porgi, amor” was a model of long-breathed beauty. All through the opera, Fritsch sang with poise. Cherubino was Margarita Gritskova, a Russian mezzo. She was a sparkplug, a shape-shifter, a Cherubino. She walked the line between personableness and hamminess, not an easy walk to walk.

Bartolo was Carlos Chausson, a veteran bass-baritone from Spain (despite his sharing a name with a French composer, Ernest). What a beautiful, glowing instrument he has—still. And his Bartolo was a pleasure to watch. Partnering him as Marcellina was Ann Murray, the veteran Irish mezzo (not to be confused with Anne Murray, the veteran Canadian pop singer). She is a total pro, as you could tell with every note she sang and every move she made.

Basilio was an Austrian tenor, Paul Schweinester, who did a fine job. In this production, Basilio is more mincing than ever. He also seems to be—brace yourself for an outdated phrase—a tormented homosexual. He lunges in agony at Cherubino. Hmmm . . .

Barbarina has one of the strangest little creations in this opera, an F-minor aria, over in a second, but somewhat haunting. An Austrian soprano, Christina Gansch, sang it with maturity. Barbarinas tend to be sprightly and innocuous. This one was strangely, and interestingly, darkling.

Back to Sven-Eric Bechtolf and his production. In recent years, I have taken to quoting Frank Lloyd Wright, who said, “A building ought to be a grace to its environment, not a disgrace.” The same is true of opera productions. They should be graces, not disgraces, to the operas they are meant to serve. They should harmonize with the music, the libretto, and the story.

This director actually likes the opera—likes Figaro, likes Mozart and Da Ponte (the librettist). He’s working with them, not against them.

He updates their opera, to be sure. This production is set sometime in the early twentieth-century—the 1920s? The Count (if I remember correctly) dials an old-timey telephone, with the receiver on the top. The sets are layered, giving an Upstairs, Downstairs feel. Rooms are open to the audience, meaning that you can see what various characters are doing in the various parts of the palace.

The production is fluid, just like the opera. It is quick-moving, saucy, farcical, subtle, poignant, and fizzy. It is sane and healthy, not sick. Where do I get those words? From Lorin Maazel, whom I interviewed in 2009. (Go here.) The maestro and I were talking about opera productions, and particularly those in Salzburg.

Bechtolf, incidentally, is the artistic administrator of the festival, not just a stage director. Given what he has done to The Marriage of Figaro—namely, serve the opera—maybe he should fire himself?

The production finishes in an unusual way. When the music stops, the action does not. The curtain does not fall. The characters have a party onstage, with lots of clinking of glasses. One by one, cast members leave the party, just for a moment, to bow to the audience.

Tristan returns, his tail wagging happily. I think practically every member of the audience wagged his tail happily at this evening of Mozart and opera.

One more word: Years ago, I interviewed Werner Hink, who was then a concertmaster of the Vienna Phil. He said he had played The Marriage of Figaro—or “Figaros Hochzeit,” as he called it, in his native tongue—more than 500 times. And never tired of it. Always basked in it. That’s Mozart for you.