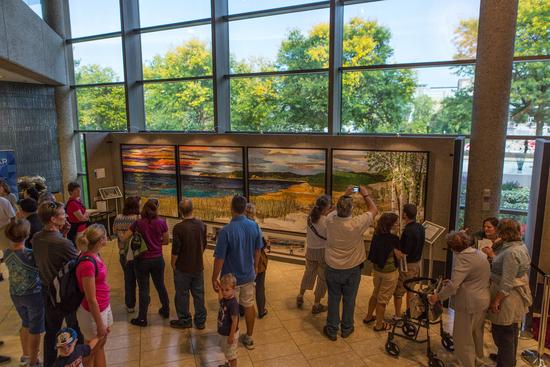 When one thinks of the important art cities of the world, Grand Rapids, Michigan is not usually the first that comes to mind. But every September since 2009, the city has hosted an event calledArtPrize with hopes to change that. And it has done so by being everything that the art world is not; here there are no cocktail parties in stark galleries, cheap wine has been replaced with good beer, and the winner of the $200,000 top prize (“the world’s largest”) is decided by a public vote (gasp!). ArtPrize is, in short, something of a “disruptor” when it comes to the larger art world – a word the event’s creator Rick DeVos has used from time to time. But it is also an event that is one of the better art experiences you can find in this country, even if it is at times, as New York magazine’s Jerry Saltz put it, completely “terrifying and thrilling.”

This year’s winner of the public vote, announced on October 4, was Ann Loveless for her work Sleeping Bear Dune Lakeshore, a scene of Lake Michigan done on a quilt. I saw this work in person, as I did all the works that were on the public Top 25 list released half way through the three week event, and was left with the impression that it was less art than craft. I don’t say this to disparage the work, as some of the best pieces I saw at ArtPrize were also more craft-like (see the fantastic woodcarving of Fraser Smith and the heavily saturated colors in the abstract quilts of Colleen Kole), but simply as a description of what I believe to be the central impetus behind its design.

It is always difficult to distinguish between art and craft, but for me the difference lies in what seems to bring the work into being. If the primary impulse to create a work is artistic, that is to say, it stems from a desire to render certain emotions, thoughts, or aesthetic qualities in a particular form, then I’m more inclined to say that work is art, but in craft the chain of logic is reversed. The primary impulse stems from the knowledge and application of technical skills rather than the “artistic” motivations I mentioned above.

This year’s ArtPrize opened on September 18 and attracted more than 1,500 entries from forty-seven countries and forty-five states. One might wonder how it is possible to see so many entries, and the simple answer is that it that it can’t be done. But because of the way the entries are displayed, it’s also impossible to avoid seeing art, which is a key part of the ArtPrize idea.

Works were displayed across 168 venues in downtown Grand Rapids, and included the Grand Rapids Art Museum, coffee shops, restaurants, bars, pubs, stores, churches, convention centers, banks, auto repair shops, and, in one of the more daring entries this year by Henry Brimmer, the space between two of the taller buildings in the city, where a forty foot ladder was suspended above one of the city’s more heavily trafficked streets. It’s hard to walk more than a few feet without seeing a blue placard labeled “ArtPrize Venue,” and it’s even harder not to peek your head into that venue to take a look. Art is simply everywhere and it seems like everyone is talking about it.

Wherever you go there are throngs of people milling about, appraising works of art, expressing their likes and dislikes, even talking with the artists themselves, who are often to be found right next to their piece answering questions and pleading for votes. I overheard waitresses talking about getting off early to go see some art, baristas in coffee shops recommended their favorite pieces to me, and I can’t recall ever seeing so many schoolchildren so enthusiastically engaging with art.

And it is very important that the public be so engaged because it is their vote that determines the winner of the Grand Prize. For the first eleven days of ArtPrize, visitors wander the city and vote on the art, offering a "thumbs up" on as many pieces as they like. They must register to vote in person, but can cast their ballots with a mobile device or from their home computers later on. When the initial round concludes, organizers tally the results and whittle the field to 10 finalists. Then a new cycle of voting begins, with the $200,000 public award at stake.

ArtPrize as an organization plays virtually no role in determining which artists can or cannot display their work or where the work will be displayed, but simply creates an online portal where artists and venues independently connect with each other. So long as an artist can find a venue to host his or her work (and pays a small entry fee and is over 18), he or she can be in the competition.

The pleasing secondary effect of this process is that venues take on certain curatorial personalities. Some locations, like the local gallery Craft House, have very coherent, well thought out, and professionally put together shows, while others, like the downtown restaurant complex The B.O.B., unashamedly play to the crowd by selecting as many interactive, colorful, sparkly, eye-catching works as they can. 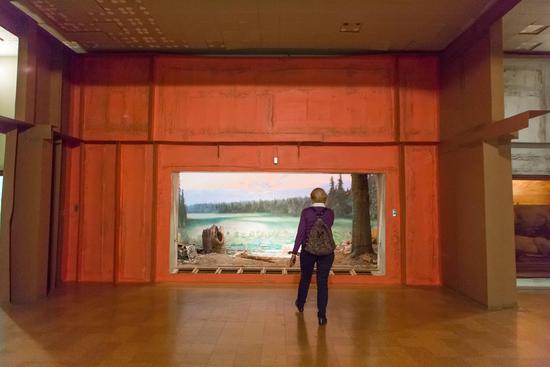 Successful venues worth mentioning included the Urban Institute for Contemporary Art, which selected works around the broad but amusing theme “PLAY,” the Kendall College of Art and Design, which won this year’s award for best venue, and the Fountain Street Church, which selected some of the most eclectic, moving, and challenging works in the entire competition.

But for all the good work these venues do, their selections seem to get very little support in the public vote. If one looks at the works in the public Top 25, one finds that they are all in the three or four most heavily trafficked venues, leaving great works in smaller venues, like Craft House, or in larger though slightly less convenient venues, like the wonderful Meijer Sculpture Gardens, at a distinct disadvantage in terms of actually winning the prize, which is an unfortunate problem that doesn’t look like it will be resolved anytime soon.

Some steps have been taken to get people to consider works that they might not have considered otherwise due to location or matters of taste. In 2010, ArtPrize added juried categories, including a Grand Prize of $100,000, and smaller prizes of $20,000 for best two-dimensional work, best three-dimensional work, best venue, and several others. The works on the Juror’s Short Lists – lists from each individual juror with five works in their category that they are keeping their eye on – were on the whole better, in my opinion, than the works on the public Top 25 list, and serve as a good counterpoint to the works that the public selected.

This year’s winner of the Juried Grand Prize was Carlos Bunga’s installation Ecosystem. Housed in the Grand Rapids Public Museum, which shuttered its doors in 1994, Bunga installed his incredibly subtle work in a multi-room gallery that houses 1970s dioramas of taxidermied local wildlife. Bunga used cardboard and paint to create new associations and relationships between the dioramas, separating some areas and uniting others through swathes of paint that framed or re-framed the old museum displays. The slight alterations were at times too subtle, and required some close looking to notice their effects, but Bunga’s re-imagining of the space ultimately drew out the artificiality of these artificial habitats and allowed me to see this old dilapidated natural history museum in an unexpected and aesthetically intriguing way.

Some people view the addition of Juried awards in 2010 as ArtPrize caving in to outside voices who claimed that the competition was just an attention grabbing popularity contest that had little or no interest in good works of art. But in my opinion, the addition simply makes explicit what ArtPrize was implicitly about in its founding. Event creator Rick DeVos made it clear to me that he had two main goals when he first started the event. First, he wanted to try to develop a creative culture in Western Michigan, and, second, he wanted to start a conversation about art – what it is, what makes it good, and who decides. The differences between popular and critical taste is a key part of the animating tension that makes the whole event work and, to my eyes, has only enhanced the conversation that has been taking place in this city every September for the past five years.