Last weekend, I went up to Dartmouth College, where I'm a student, to visit some friends for Homecoming weekend. While I was there, I stopped by the college's excellent Hood Museum of Art to see the new exhibition "Picasso: The Vollard Suite," on view through December 20. This rare collection includes 100 etchings created by the Spanish artist between 1930 and 1937, commissioned by the French art dealer Ambroise Vollard. Though over 300 sets were originally created, most have since broken up, and the Hood is one of eight museums in the world to own the complete set of 100 prints.

The British Museum director Neil MacGregor described the Vollard Suite as a "walk inside Picasso's mind," an apt analogy, as the parallels between Picasso's evolving art over these seven years and the transformations in his personal life become obvious as one explores the collection.

The Hood emphasizes the inspiration Picasso drew from such artists as Rembrandt and Goya. To further aid visitors in making this connection, the exhibition includes select pieces by those two artists alongside Picasso's work. For example, displayed next to Picasso's depictions of bullfighting is Goya's famed "Bulls in Bordeaux."

A series of sketches of Picasso's lover, Marie-Therese Walter, make up the bulk of the exhibition. These are gentle, intimate, and private, with Walter portrayed as the ideal classical female. Picasso occasionally includes himself in these etchings, often as a half-man, half-goat darkly lurking beside his nude lover, though in pieces such as "Sculpteur et modele agenouille," Picasso sits in clarity like a Greek god while his muse is shrouded in darkness. In many, Walter is surrounded by classical sculptures, sometimes becoming the sculptor herself. The Hood's descriptions stress these etchings' basis in reality, as Picasso at the time was living with Walter in a sculpture studio in the Chateau de Boisgeloup.

The final pieces (excluding the three portraits of Vollard) focus on the character of the Minotaur, who at first harmlessly joins Walter in the etchings as her consensual lover. Eventually he succumbs to a cruel and predatory monstrosity, which fills the previously serene scenes. In a final turn in the Minotaur's psychological development, a girl resembling Walter guides the blind and anguished creature in the piece "Blind Minotaur Guided by a Young Girl through the Night." This evolution of the Minotaur, widely accepted as the representation of Picasso's psyche, is said to reflect the increasingly troubled relations between Walter and Picasso, Europe's descent into fascism and war at the close of the 1930s, and Picasso's own inner turmoil.

The exhibition includes one of Picasso's most celebrated works, the dark and chaotic "Minotauromachy," loaned to the Hood from the Philadelphia Museum of Art. Though Picasso created the piece for the Vollard Suite, Vollard decided it was too large to include in the original set. 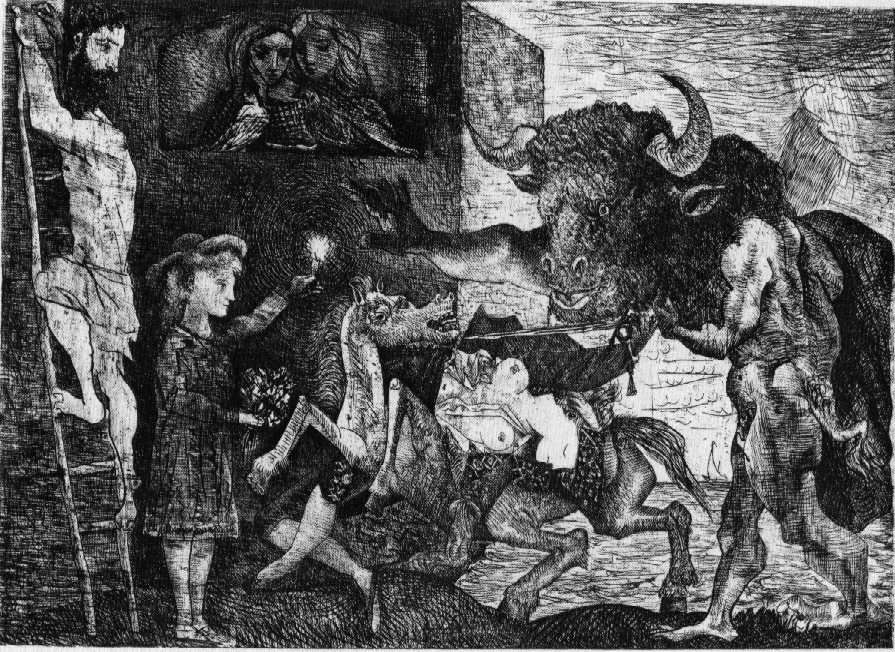 Picasso did not title any of the pieces, though he dated each one, deepening the impression that this collection serves as a "visual diary" for this period of Picasso's life, as Hood director Michael R. Taylor puts it. "The works illustrate the two worlds to which Picasso owed allegiance at this time, namely the harmony and order of classical art and the Surrealist world of dreams and the imagination," Taylor writes in the Dartmouth Alumni Magazine.

The Vollard Suite offers a deeply personal look into Picasso's mind and creative process, and as there are only three museums in the country with the complete collection, a trip to the Hood this autumn is certainly worthwhile for all Picasso fans.