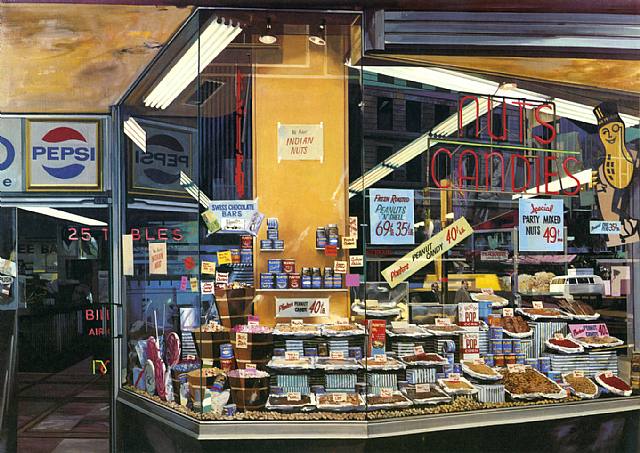 Richard Estes’ photorealistic painting style is all about overcoming inertia. For years, Estes has patrolled the streets of New York with a camera, shooting randomly at various times of the day or night. Over time, he has amassed thousands of contact sheets showing the same streets and the same buildings. He may return to a scene repeatedly, taking more photos over the space of months or even years. When he’s finally ready to think about a painting, he returns to the darkroom, making one set of prints of a scene’s highlights, another for its shadows. This kind of perseverance gives him a decidedly unromantic appreciation for the tedium of making art: “Usually it’s a pretty calculated, sustained, and slow process by which you develop something […] I think the real test is to plan something and be able to carry it out to the very end. Not that you’re always enthusiastic: it’s just that you have to get this thing out. It’s not done with one’s emotions; it’s done with the head.”

Richard Estes’ Realism, at the Portland Museum of Art, is the most comprehensive exhibit of his work to date. The exhibition includes The Candy Store (1969), his first piece acquired by a museum. The calculation and intensity of his work was not lost on the Whitney curators who bought the piece, seeing in it not only an extraordinary view of an ordinary shop but also nods to arch Pop Art practitioners Lichtenstein and Warhol.

Pop Art also hovers around the edges of Bus With Reflection of the Flatiron Building (1966­–1967) and Car Reflections (1970). In the former, which Estes considers his first mature example of the photorealism for which he is now famous, the artist arrives at an illusionistic yet painterly rendering of metallic surfaces and ironically reduces one of New York’s most famous landmarks to a reflection in a car window. The latter painting is an almost abstract view of two cars at the intersection of West 20th Street and Fifth Avenue: Are they colliding or just parked very close together? In both works, traces of motion—transportation, transience, and time—emerge in spite of the snapshot conceit.

Estes secured his reputation as a master of contemporary realism with works such as Bridal Accessories (1975), Double Self-Portrait (1976), and Jone’s Diner (1979). Working on quiet Sundays when blue laws kept New Yorkers from clogging the shops and sidewalks, Estes captured the city as few people had seen it. Many critics have noted the documentary aspect of Estes’s work, and no doubt nostalgia plays a large part in his appeal. But if Estes were merely setting himself the task of replicating the world as it is, his would be a sociological motivation rather than an expressive one. 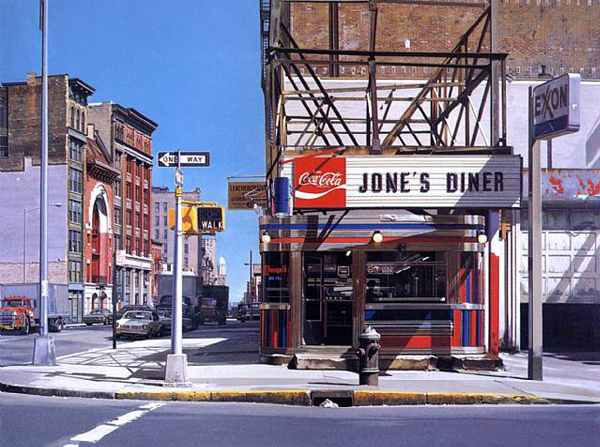 Estes’s views of New York have become a part of the visual discourse of modern art and also of the city as American symbol. His cool realism confronts photographic veracity without dissembling, but he is unafraid to imprint individualistic considerations on his emblematic scenes. In spite of his photographic preparation, Estes sometimes makes corrections, changing the color of curtains or keeping all-over focus on a wide-angled view. Where there are limitations to our perceptions, Estes opens up new possibilities. The introduction of artistic agency converts photorealism from a slavish and superficial homage to a version of the familiar that in the end defamiliarizes.

Dazzling as his paintings may be from afar, it is instructive to examine Estes’s technique up close. Even if one is reluctant to peek behind the curtain, it is interesting to see the painter’s hand at work. Looking closely at Central Savings (1975), for example, we see that the chrome on the counter stools is rendered in a series of gray vertical strokes. Given Estes’s methodical approach, it is possible to imagine daubs of gray and white, perhaps even premixed oil shades, ready to be deployed in various widths to replicate the light glancing off the line of stools.

It is rare to see Estes falter in his technical control, although it happens occasionally, as in Ansonia (1977). This split perspective work depicts the famous Ansonia apartments on New York’s Upper West Side and their reflection in a florist’s window. In the foreground is a marvelous rubber plant, but its pot clumsily sits on top of an identical vessel turned upside down. “That pot isn’t entirely successful, is it?” a fellow museumgoer noted ruefully. One has to agree.

In the 1980s and 1990s, Estes painted a series of famous bridges, among them, the Pont Neuf in Paris, London’s Tower Bridge, the Ponte dell’Accademia in Venice, the Roman bridge in Cordova, and the Brooklyn Bridge. These views canvass a range of influences from seventeenth-century Dutch painters to Canaletto, the post-Impressionists, and the American precisionists.

Also around this time, Estes began painting portraits. Water Taxi, Mount Desert (1999) shows two friends of the painter, mother and daughter, caught in Maine’s crystalline late afternoon light as they speed away from the island. The time of day, the subjects’ evasive posture, and the artist’s vantage point facing backward give this painting a wistful, Degas-like sense of intimacy. Caught up in their own thoughts, neither notices, as Estes has, the glorious, foamy trough being left in the wake of the boat. 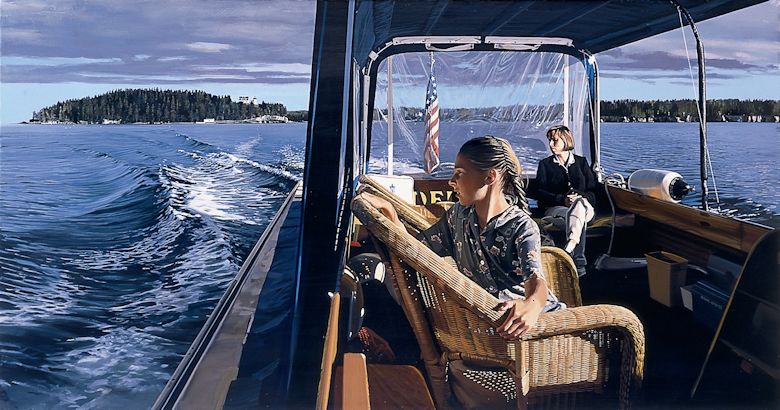 Estes’s masterful handling of water, fluid and frozen, is undeniable. In Antarctica (2007), he brings his considerable technique to bear on a panorama of a snowy mountain under a cloudy sky. The roiling surface of the gelid water is handled with aplomb and the mountain at the center of the composition draws our attention—not because of its obvious majesty, but because of the way that Estes depicts sun and shadow playing across its surface.

Back in the city, Estes’s more recent paintings of Times Square or Columbus Circle reinforce, if we had any doubts, his premier position as America’s top photorealist. But for sheer technical bravura, The B Train (2005) and The L Train (2009) are unbeatable. Smaller than many of his cityscapes, these two paintings focus on subway windows and doors. Any bored commuter has seen (or overlooked) these views hundreds of times, but Estes’s penchant for making the everyday new even revives hoary artistic devices such as framing (The B Train) and infinity mirrors (The L Train). 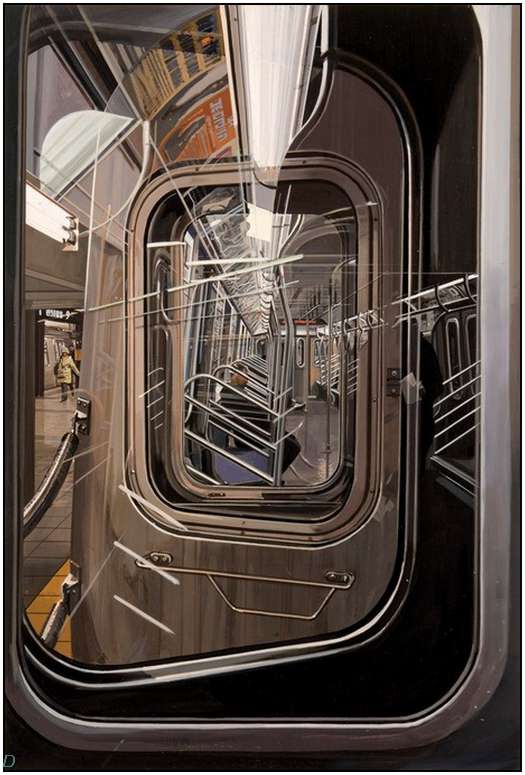 To assert that Estes’s realism is a triumph over inertia refers not only to the artist’s deliberate conception and patient execution of each painting, but also to the complacency of the viewer. Why go to a museum to see paintings of a well-known city or yet another picturesque landscape? Why does Estes create paintings that seem to demand almost more patience than even he is willing to expend? Because although the eye might glide blithely over his surfaces and marvel at his technical prowess, Estes grabs our attention by being present in his work. Despite his dispassionate stance, his efforts to engage us are real. In the guise of a cool realist, he insinuates possibility and potential.

It is a truism that the greatest potential exists in our imagination, but Estes has little use for romantic exaltation. We react rather to his material connection to his world, his interest and appreciation of the natural as well as the manmade, and—perhaps most surprisingly—we recognize his warmth and his sense of humor. Estes helps us to overcome a mind at rest.