Running from Thursday through Sunday at the Metropolitan Pavilion on 18th Street, the 2016 Outsider Art Fair devotes 24,000 square feet of exhibition space to the uneducated, the mentally ill, and the provincial. The Fair’s press release uses Jean Dubuffet, the original champion of art brut, to draw its boundaries: “works produced by persons unscathed by artistic culture, where mimicry plays little or no part (contrary to the activities of intellectuals).”

The Outsider Art Fair’s promotion of such art is noble. Further, it is topical, given American society’s current fascination with outsiders in the political arena. To be sure, the large majority of exhibitors at the Outsider Art Fair claim to house only self-taught, developmentally challenged, or mentally ill artists. These galleries thus distance themselves from the established mainstream.

Consider, however, that Christie’s is devoting a sale today to “Outsider and Vernacular Art,” with works expected to sell for upwards of $200,000. Consider also that in 2013 the Venice Biennale devoted its main exhibition to the genre (named “The Encyclopedic Palace” after self-taught artist Marino Auriti’s utopic architectural model for a museum that would “house the entirety of worldly knowledge and human discovery”). Might not the burgeoning existence of an ‘outsider mainstream’ hamper the Fair’s claim to art in which “mimicry plays little or no part”? Further, doesn’t unlimited and immediate Internet access to the world’s greatest works of art make any kind of “artistic vacuum” rather unlikely?

These are all important questions to consider when walking through the Outsider Art Fair, which does hold many examples of original thought and quality art. Beside the countless kitschy oddities that litter the Fair (model UFOs, yarn-woven stuffed animals, and marriage-themed figurines to name a few) sit more conventional works that wouldn’t seem out of place in a more "insider" commercial gallery.

The Rebecca Hossack Gallery of London exhibited two noteworthy painters that call into question the Fair’s claim to total unconventionality. New Zealander Rob Tucker’s large, glossy still lifes stood out for a sense of painterly resolution that was absent throughout much of the rest of the Fair. Tucker’s subject matter, as well as his frequent use of cream whites and chromatic grays, call to mind Morandi, placing him within the trajectory of mainstream western painting. Works by Andy Dixon, a self-taught musician and painter from Vancouver, show a keen awareness of the Post-Impressionists and Fauvists as well as more recent painters such as Basquiat and Condo. Unsurprisingly, both of these ‘self-taught’ artists have been wildly successful in their home markets, each with multiple solo-exhibitions to his name.

At the booth of The Pardee Collection (Iowa City, IA), mixed-media color drawings by artist Jim Work typified one of the central charms of the Fair; that is, its lack of conscious pretension. Work’s architectural focus is reminiscent of Charles Demuth, and his employment of economy in depicting his rural landmarks is laudable. The frontality of Work’s drawings calls to mind the American mid-century. His use of modest materials to depict modest subject matters, however, lightens the heavy philosophical undertakings of those painters.

Also of note is the work of Willie Young at the Tanner Hill Gallery booth. Young's work, which consists of spindly geometric drawings on brown paper, resists easy labels. The forms are reminiscent of Bosch's fantastical creatures but the medium tethers them to the observable world—no surprise as Young claims to have worked from "small life details." 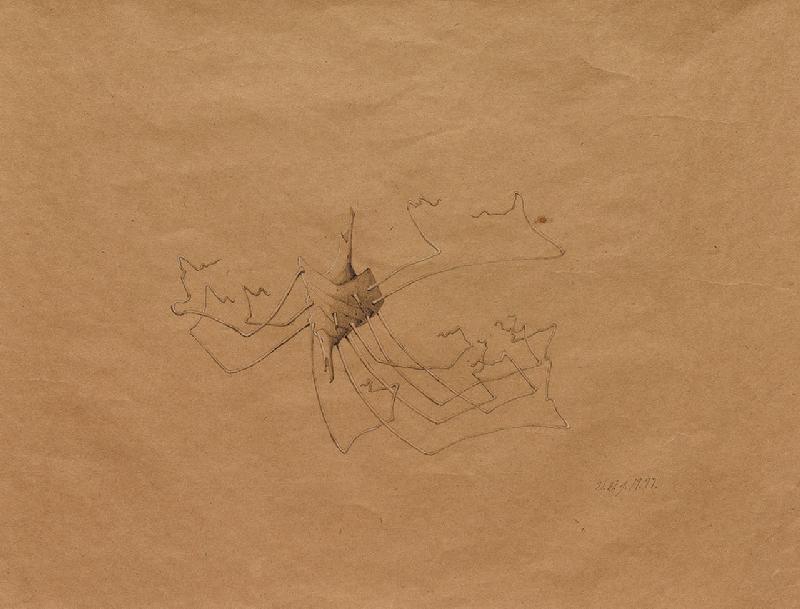 A work by Willie Young, via

The Outsider Art Fair of 2016 presents many works and objects that are interesting because of their creators’ biographical backgrounds. It also holds work that stands up to more traditional formalist evaluation. But these latter works also challenge the Fair’s bold assertion of unfettered originality and creative isolation. Perhaps what the 2016 Outsider Art Fair demonstrates is an undersupply of new “outsider art” in the idealized sense that Dubuffet imagined it. Perhaps, too, we are seeing a gradual commodification of the term itself, a regrettably unsurprising possibility.

The Outsider Art Fair opened at the Metropolitan Pavilion, New York, on January 21 and remains on view through January 24, 2016.

Andrew L. Shea is a painter and writer.