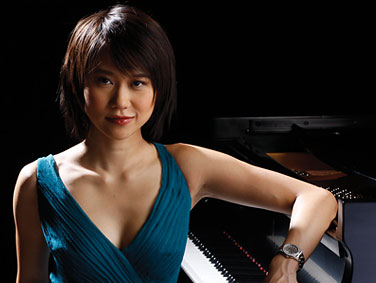 It was late: 8:15. Yuja Wang’s recital at Carnegie Hall was supposed to start at 8—which in New York concert terms means 8:05. Was the young Chinese pianist fashionably late or more like strangely late, or rudely late?

She certainly had a great program to play. It would begin with Schubert songs, arranged by Liszt. Then move to one of Schubert’s late, great sonatas: the one in A major, D. 959.

After intermission, we could get a slew of Scriabin pieces, ending with the “Black Mass” Sonata. To close the program—printed program (not taking encores into account)—would be Balakirev’s delightful, fiendish warhorse, Islamey.

Two nights before in this hall, Daniil Trifonov had played his own recital. He and Wang are probably the two most sensational young pianists before the public today. Was it a mere coincidence that their Carnegie recitals were scheduled in such close succession? If so, that was quite a coincidence.

Wang played in this hall last month, too: in partnership with Leonidas Kavakos, the violinist. I’m afraid I left after the first half, unable to take anymore. The playing was shockingly bad. Musical feeling was absent. I address this recital, or half of it, in my next “chronicle,” for the magazine.

As the lights dimmed last night, the friend sitting next to me proposed a bet: How short would Yuja’s dress be? I thought hip level, approximately. In other words, scarcely a dress at all. My friend thought ankle length.

We both won, in a way: Wang came out in a dress that was long on one side but slit on the other—all the way up. This was the side, naturally, facing the audience, as she played. She was essentially naked onstage. The dress was another example of her “stripper-wear,” as I have called it.

Let not this failure of taste distract from a fact: the fact of Wang’s greatness.

Her first Schubert-Liszt song was “Liebesbotschaft,” from Schwanengesang. It was rippling and gorgeous. The pianist floated across the keys. She gave a demonstration of pure horizontality. The piano was no longer a percussion instrument.

How does she do this? And can anyone else now playing do it? Jean-Yves Thibaudet?

In the two other songs, she was much the same. She was crystalline, sensitive, and musical. She was utterly composed, with hands and mind in balance. If there was a fault, it was this: Some phrases required a fuller tone, a tone with more body. Wang was occasionally wispy.

She began the sonata—D. 959—deep into the keys. She made a robust, masculine sound, and yet one that was warm. This was exactly the right sound. And she played the rest of the first movement with unwavering intelligence. I thought, “This is a true Schubertian, a true musician.”

I also thought of a game: Say the pianist sitting before us were not a brash girl in stripper-wear but an antique, venerable Austro-German Meister. What would we think then? Would we be in awe? Do we mark this pianist down because of her youth and appearance?

The second movement, Andantino, was gripping. That is because it was perfectly paced. (At least that is a major reason.) Wang showed impeccable judgment.

And I had this thought: “Cameras were onstage to film that joint recital with Kavakos. What a waste. That recital should be allowed to die. But where are they now, those cameras?”

Schubert’s third movement is the Scherzo, that sprightly, dancing, leaping thing. Never was it more sprightly than in Wang’s hands. And she can leap in time. What I mean is, her technique is so good, she does not have to alter the rhythm, as she leaps. More mortal pianists make little adjustments to account for their limitations.

Accuracy is not everything in this movement, or in this sonata. But once you’ve heard it played accurately, you think, “This is better, now that you mention it. Accurate is better than not.”

In the final movement, Wang captured Schubert’s Gemütlichkeit, his smile, his peaceableness. And once more, she demonstrated her amazing legato, that seemingly impossible horizontality.

I have a question, and I mean it in earnest: Piano idols like Kempff, Serkin, and Brendel—did they not employ such a legato because they didn’t want to or because they couldn’t?

In her Scriabin, Wang was alert, immaculate, and poetic. She and this composer are pretty much made for each other. Outstanding was “Etrangeté,” the second of Scriabin’s Two Poems, Op. 63. It was impish, spiky, and mysterious.

How about the “Black Mass”? I have one main criticism, which applies to some of the rest of Wang’s Scriabin: It would have benefited from more intensity—submerged intensity. Buried intensity. The sense of an underlying anxiety. But, listen, it was awfully good.

Islamey, you have heard many times, probably, and so have I. What was different about Wang’s? Its intricacy, its nimbleness, its clarity. Its freakish accuracy. You could have written the score down from this playing. That’s how clear it was. At the same time, the piece had its due excitement.

Happily, there was a string of encores, basically Wang’s regulars: the Schubert-Liszt “Gretchen am Spinnrade”; the Horowitz Carmen Variations; the Tatum version of “Tea for Two”; etc. “Gretchen” built, movingly. “Tea for Two” swung, thrillingly. Has any American ever played it more idiomatically than this Chinese girl, who came to our shores as a teenager?

I’m not sure I have the courage to say how good this piano recital was. Everyone likes to wait for a safe consensus, even the boldest of us. Far better to hail a pianist when she is old and creaking—or, better yet, dead—than when she is young and brash.

But, honestly, the musicality we heard last night was as rare as the technique. I can’t think of a single lapse of taste, in two hours of playing, and the playing of a diversity of music, at that. As I was leaving, a fellow critic said to me, “I never would have believed it if I hadn’t been here.”

Believe it. Yuja Wang is more than a flashy pianist baring her bod. She gave the recital of a pianist with a deep, probably innate understanding of music.