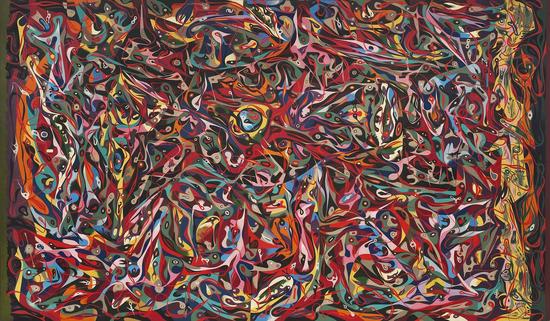 Viewing the works of Alfonso Ossorio for the first time, one finds it difficult to place him in the history of art. Though typically labeled an Abstract Expressionist, his work might better be described as abstract and expressionist, with liberal doses of Surrealism, Art Brut, and a few other eclectic affinities thrown into the mix. Taken together, Ossorio’s work produces quite a heady effect, and through this Saturday at Michael Ronsefeld Gallery, one has a chance to see thirty-three of these fertile—and at times febrile—works of this artist who is often overshadowed by his more famous friends but worthy of consideration on his own terms.

A little background is necessary for Ossorio. He was not your typical Abstract Expressionist. Born into great wealth in the Philippines in 1916, the heir to a sugar fortune, he later moved to the West, attended Harvard, served in the U.S. military as a medical illustrator during World War II, and finally set up shop as an artist and collector at his enormous East Hampton estate, the Creeks. These facts alone make Ossorio something of an oddity among the abstract expressionists, but he was also, to single him out even further, a devout (but conflicted) Catholic of Hispanic, Filipino, and Chinese heritage, and a gay man who lived with his partner for decades. 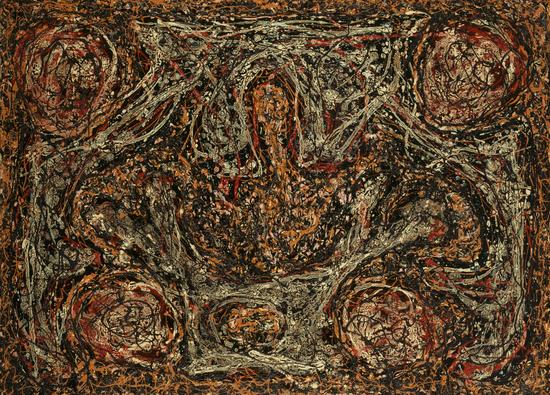 This exhibition is the tenth that the gallery has dedicated exclusively to Ossorio’s work over the past twenty-five years and focuses on works from 1949 to 1953. The majority of these were created in 1950 while working on a multi-surface mural for the Church of Saint Joseph the Worker, which his family had built in the town of Victorias for the employees of their sugar refinery.

The works on display are extraordinarily diverse, but a few common threads are present. Ossorio was famously friends with both Jackson Pollock and Jean Dubuffet, serving as perhaps the sole direct link between Abstract Expressionism and Art Brut, and his work incorporates both of those influences. Ossorio tends to place figurative elements and shapes not unlike Dubuffet’s in a Pollock-like all-over field of line, color, and gestural marks. Also like Dubuffet, many of the works are done on cutout or shaped canvas, paper, or wood board, thus delineating and enclosing the hectic compositions.

Many of these works posess a certain rawness with their use of hot, vivid, and deep colors, pierced and jagged forms, gritty surfaces, and odd biological bits, but there is also an overall elegance to each work that appears to have come as naturally to Ossorio as it did to Motherwell. 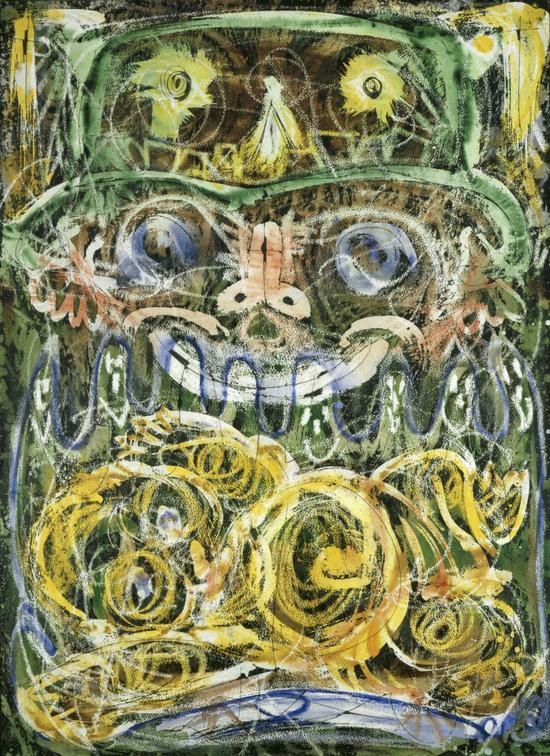 In many ways, Ossorio’s style from this period seems to anticipate what we now call Neo-Expressionism. He is ab-ex with a definite emphasis on the “ex,” reconciled with Dubuffet’s embrace of “low art,” and executed with great skill. Works like Baby Collector (1950) and Untitled (MR420) (1949) look like brilliant expressionist graffiti that wouldn’t be at all out of place in a Basquiat exhibition.

Other paintings, like Mother & Children (1951), are closer to Pollock’s drip paintings. But Ossorio’s drips come off looking more like those of Janet Sobel, who is thought to be the originator of the drip technique. Neither Ossorio’s nor Sobel’s drips have the same sense of space, openness, or lyricism of a Pollock drip, and this particular canvas is so densely packed and layered, with every space filled up with drips and swirls, that it feels suffocating.

But I think this was Ossorio’s intention, or perhaps the inevitable product of his return to the Philippines. As Kent Minturn, an art historian at Columbia University, points out in one of the catalogue essays, Ossorio’s childhood had not been a particularly happy one. Moreover, his return to his home country for the first time since childhood stirred up many conflicted feelings, especially regarding his sexuality and his Catholic upbringing. And many of these paintings, so completely filled as they are, feel as if Ossorio is grappling with an unceasing flow of emotions and memories. 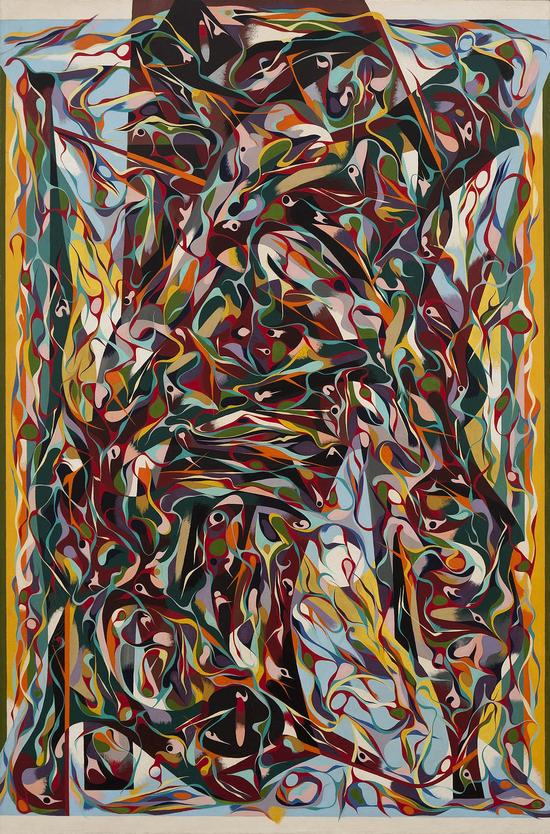 To deal with all these conflicting and layered emotions Ossorio developed a special wax-resistant technique, which allowed him to more thoroughly mix abstraction and representation, and to depict an uncommon number of layers with his brushstrokes and marks. After applying a light color wash to the paper, Ossorio would draw forms with wax, and then paint in watercolor, which would saturate all the areas of the paper except those with wax-drawn shapes. Thus, with certain layers being “saved” in wax, and others being subsequently added on top, these works posses a complex lattice that allows them to be, as Minturn writes, “palimpsests that retain all of the traces of Ossorio’s past.”

Oddly enough, the headliner work, Blood Lines (1953–54), and the sizeable, similarly styled Beach Comber (1953), fit in least with the rest of the show. These works are very large—Beach Comber is twelve feet across—whereas most of the others are small, and they both have dizzying, all-over fields of abstract undulating biomorphic forms, flame-like, wave-like, and vaguely spermatic with heads with tails. Despite the frenzied composition and garish, heavily saturated colors, every form is exceptionally neat, crisp, and flat, faintly reminiscent of Gorky’s melding of synthetic cubism and surrealism.

I think my favorite work was #2 (1953, 52–53) tucked away in the back corner of the installation. It is indicative of neither the show nor of Ossorio’s style, but it seems like it conveys something of his Catholicism strongly. The canvas is a beat up, earthy, brownish pink, and looks like the plaster wall of an old Catholic church somewhere in a small country village. Once filled with relics and icons, the wall has now been stripped bare and all that remains are worked over blotches, charged absences. 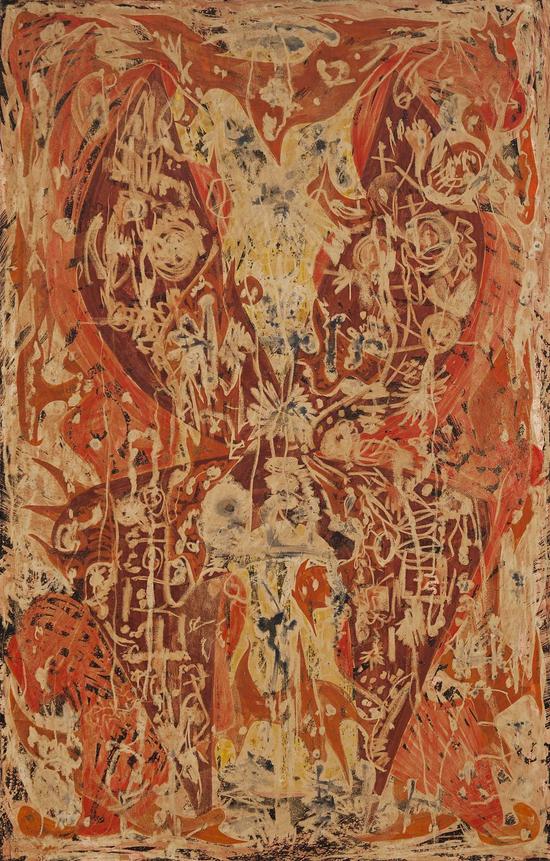 The painting calls to mind something the very good, but oft overlooked, modern sculptor Saul Baizerman once said when asked how he knows when a piece of his is finished: “How do I know when a piece is finished? When it has taken away from me everything I have to give. When it has become stronger than myself. I become the empty one, and it becomes the full one. When I am weak and it is strong, the work is finished.”

Considering this stylistic diversity and seeming constant experimentation, one might say that Ossorio is something of a dilettante, living and working in the shadows of his more famous artist friends but without a real style of his own. But the works on display here show that Ossorio, like Baizerman, completely emptied himself out while making these works and they are subsequently strong. In his letters, Dubuffet praised Ossorio for his idiosyncratic and deeply personal style, writing, “you have developed—no one could have done it any better—a means of self expression that suits you perfectly.” Isn’t this all one can ever really ask an artist to do?