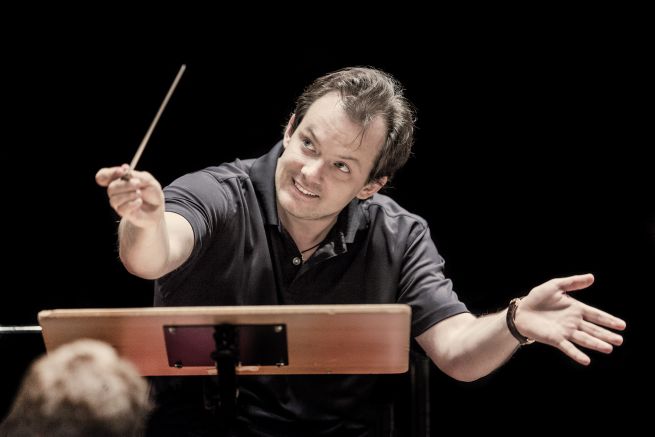 Here at the Salzburg Festival, the Vienna Philharmonic is king—the resident orchestra. But sometimes interlopers get in, and sometimes those interlopers are American. In 2008, the Cleveland Orchestra came (albeit under an Austrian music director, Franz Welser-Möst). This year, the Boston Symphony has come.

Its conductor is Andris Nelsons, the young Latvian, who has been with the BSO since last fall, and with whom the orchestra is expecting a long relationship. He is a protégé of Mariss Jansons, his great countryman, who has been the music director in Pittsburgh, Amsterdam, and other places.

There they were, warming up onstage, the Bostonians. Why do I mention something so prosaic? Well, American orchestras warm up onstage. European orchestras, as a rule, warm up behind the scenes, then take the stage, then tune, then start.

Give you another cultural difference: When we Americans pass through a row in a theater, we do so with our backs (and butts) to the people already seated in the row (or standing to let us pass through). In Europe, they pass while facing the people.

When I first started attending performances in Europe, I found this custom strange and awkward. But I adapted, mainly.

We Americans, as a rule, like ice in our drinks. Others, of course, do not. One could go on. Vive la différence! (And to heck with conformity.)

Before the Bostonians came, I had been listening to the Vienna Philharmonic for about two weeks. And, frankly, the American orchestra, warming up onstage, sounded needlessly cacophonous to me. Jarring. Also, it was like the music was starting before it really started, if you know what I mean.

In the midst of this cacophony, the people who run the Grosses Festspielhaus played their cellphone announcement—their recorded announcement telling people to be sure their phones are switched off. You could barely hear it. So, after the orchestra quieted, they played that announcement again.

The concert was scheduled to begin at 9 o’clock. Over here, the concerts usually begin right on the dot. At home—in New York, at least—there is always—always—a five-minute grace period. If the performance is at 7:30, there is no music until 7:35, at the earliest. Or rather, the recitalist or the conductor does not appear until 7:35.

Last night in the Grosses, 9 o’clock came and went. Some patrons around me looked at their watches, apparently confused. Maestro Nelsons walked out at 9:05, just as we would back home.

Just a few more notes, while I have you on the line. At one point during the Mahler, Nelsons did a classic Jansons leanback move. I smiled. I thought I was looking at Jansons himself. I could glimpse Jansons in some other moves, too.

Some years ago, the New York Philharmonic had an assistant conductor, a young woman from China. One night, I watched her execute some classic, and classy, Maazel moves. I almost fell out of my chair.

Of course, Michael Tilson Thomas is now a senior statesman of the podium, and he’s still doing what I still think of as Lenny moves (i.e., Bernstein moves)—including that side-to-side thing, that swish. Makes me smile.