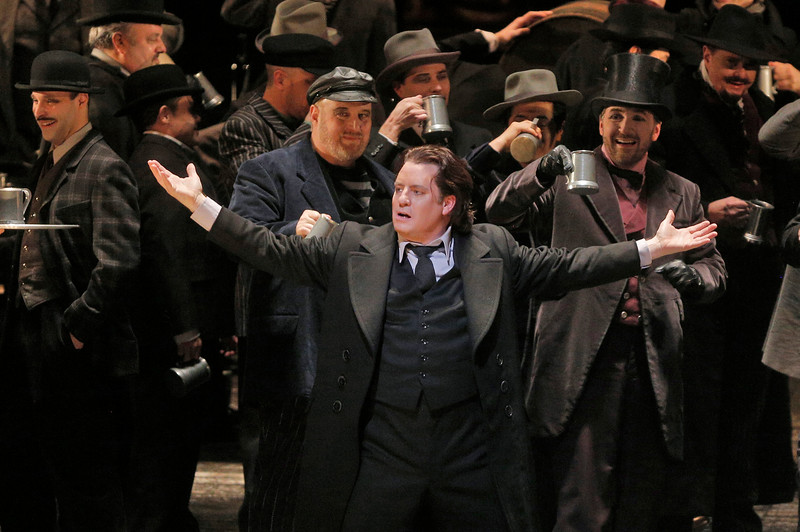 In January, I offered a review of The Tales of Hoffmann at the Metropolitan Opera. This is the opéra fantastique of Jacques Offenbach, which bowed in 1881. Now I am back with another word. Why? The Met has a different conductor and cast.

The conductor is James Levine, the company’s music director. When he began the opera on Wednesday night, the music was precise, bold, and masculine. It had gravitas. How does Levine do that? How does he get that sound, in work after work?

I could describe Levine’s conducting in detail, act by act, or scene by scene, but maybe a few words would suffice. He conducted Hoffmann with the same intensity and grandeur he would accord Beethoven’s Fidelio or Wagner’s Ring. Apparently, no one has told him that Offenbach’s opera is a romantic French nothing. Levine was vital from first note to last, bringing out the work’s full character.

Honestly, he made the thing seem like a masterpiece. It probably is.

Singing the title role, Hoffmann, was Matthew Polenzani, the American tenor. First, the bad news: Polenzani is probably a size too small for the role. Now the good news: he is still Polenzani, and he sings beautifully, intelligently, and winningly. Shadowing him as the Muse was Karine Deshayes, a French mezzo-soprano. In her upper register, she was strong and appealing; in her middle and lower registers, she was less so. But she was still an efficient Muse.

A standout of the night was Laurent Naouri, a French bass-baritone who sang the Four Villains. He brings several things to the table: a beautiful, rich, and large sound; a sense of drama; and clear, beautiful French. His performance of the aria “Scintille, diamant” glowed malevolently, just as it should.

Incidental intelligence, as my colleague Martin Bernheimer would say: Naouri is married to Natalie Dessay, the famous French soprano.

Audrey Luna, an American soprano, sang Olympia, the mechanical doll. Her voice does not rival, say, Renée Fleming’s in beauty. But it sounds very good up high, and I mean way up high. You’ve heard of a high A? That is, the note a couple of steps below high C? Luna sang the A above that A—and sang it splendidly. The note was in tune, sustained, and rather otherworldly.

Another American soprano, Susanna Phillips, was Antonia, and she sang with evenness and confidence. Her sound is nicely focused, unliable to spread. A Russian mezzo, Elena Maximova, made a suitably sultry and haughty Giulietta.

But I must return to Levine—who had the kind of night that reminded you that he is a great conductor. I don’t say that he is ready to play lacrosse, given his medical struggles. But I have seldom heard him better, in decades of listening to him.