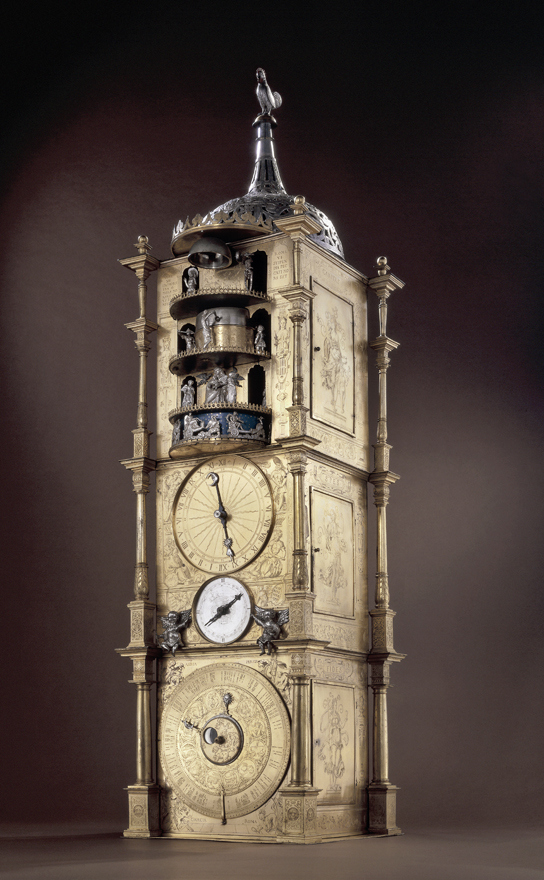 The British, like the Americans, know a great deal about German history—all twelve years of it. The objects assembled at the British Museum, many of which are of considerable artistic merit, bring home to visitors how very narrow their knowledge is.  The exhibition begins with pieces from the glorious reunification of Germany in 1989, and indicates how very fragmented the country has been for most of its history.  In 1700, Britain had a single currency, but Germany had close to 200, with every local ruler—from the great electors and the imperial princes to individual dukes, counts, margraves, bishops, cities and abbeys—issuing its own coinage. It is perhaps ironic that now most of Europe except Britain has one single currency, and it is controlled by Germany, the economic master of the Eurozone.

Germany was for a long while a nation with very vague boundaries. Basel (now in Switzerland), Strasburg (now in France) and Prague (now in the Czech Republic) were all thoroughly German cities within the Holy Roman Empire. Strasburg with its great Gothic cathedral and important publishing industry, was a core German city, a free city of the Empire. Prague was the home of the oldest German university in Europe, and a major center of German culture and science. This map of a past Germany enables the curators to display a variety of objects from Hans Holbein the Younger’s famous Portrait of Erasmus (1523)—painted at the time when both he and his sitter were in Basel—to a woodcut of Franz Kafka—a graduate of the German university in Prague—to show how broad the German lands had once been. 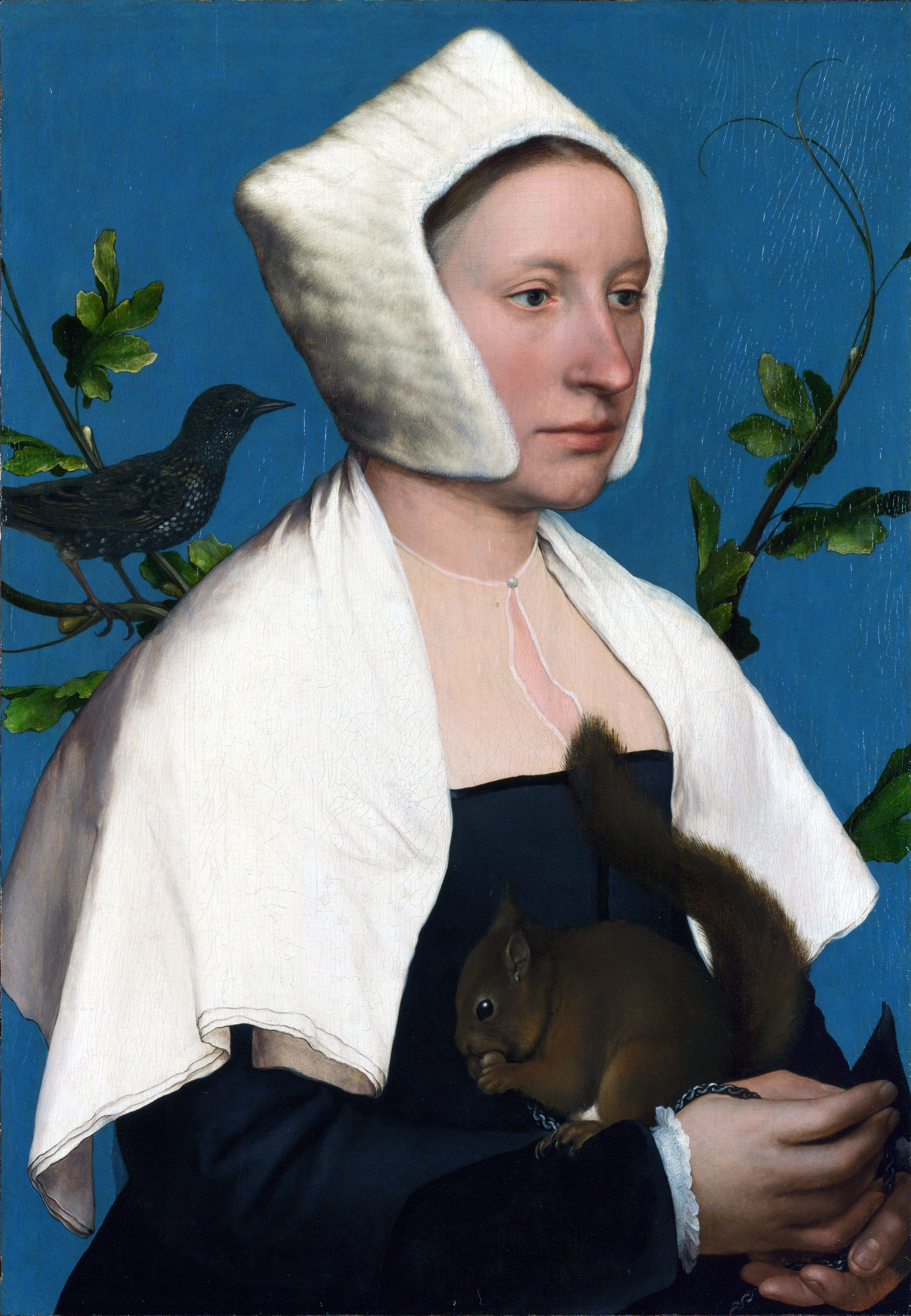 Lady With a Squirrel and a Starling (1526-28), Hans Holbein the Younger

Holbein, a German artist from Augsburg, brought Renaissance standards of realism to England with his painting Lady with a Squirrel and a Starling (1526-28). The very plain, long-nosed woman is characteristically English, but according to the curators, her squirrel and her apparel were imported via the London office of the Hanseatic League, the same route by which Protestant books and ideas entered Britain.  The Hanseatic cities were a voluntary commercial federation with a single currency, led by Hamburg and Lübeck, that dominated the trade of Northern Europe. England was just a country at the periphery, importing its more sophisticated artifacts, artists, and ideas from Germany, a more advanced country at the heart of Europe.

On display in the exhibition is a Gutenberg Bible from 1455, proof that modern printing with movable metal type and oil-based inks is a German invention, and a form far more sophisticated than that known earlier in China and Korea. It took two-and-a-half years to set up the first Bible, but afterward, the press could turn out 180 volumes in the time it would have taken a scribe to produce a single copy. Yet the Bible on display still has the old, colorful pages we associate with medieval manuscripts.  Each copy of the early printed bibles was beautifully and individually illustrated according to the wishes of its particular purchaser. There was still an independent role for the individual artist, and the prospective reader could make aesthetic choices. 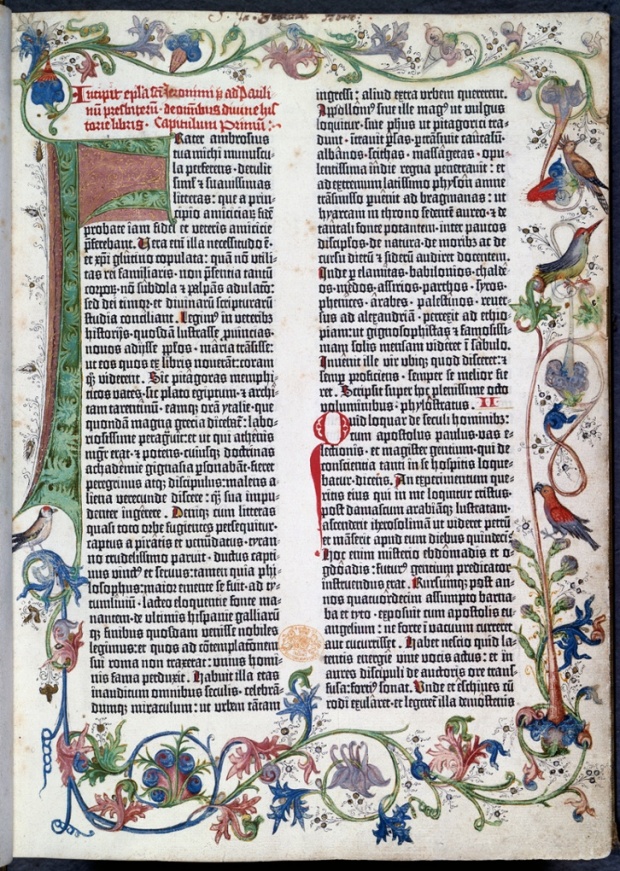 A page from the Gutenberg Bible. via The British Library Board

The invention of the printing press and its rapid spread through Germany were a precursor to today’s Frankfurt book fair, just as the clocks of Strasburg, the knives and swords of Solingen, and the early but precise scientific instruments in the exhibition point towards the way in which Germany today, as it did in 1910, dominates world trade in sophisticated, well-designed manufactured goods. This economic dominance would have occurred much earlier but for German disunity and the periodic invasions by its neighbors, notably during the Thirty Years War (1618-1648), when Germany lost between one third and one half of its population. The depredations of the French devastated Germany from Louis XIV onwards. These traumas were succeeded by the invasions of Napoleon in the early 1800s. He conquered the German states, controlled most of them, and subordinated the rest.

This total humiliation led to a growth in German consciousness, and a wish to become a single, unified people.  One of the ways in which these intense feelings were expressed was through the Romantic Movement’s strong attachment to the German landscape, particularly its rugged mountains and dense forests.  The freedom of the wild was a substitute for having free institutions, and even today the Germans have an attachment to nature that amounts to a national fetish. Germany’s love of its ancient oak forests is founded on the idea that they are the very groves from which the German tribal leader, Arminius, emerged to ambush and destroy the Roman legions of Publius Quinctilius Varus in 9 AD. In the British Museum exhibition, the equation of nation and tree is expressed through the paintings of Karl Gustav Carus, a follower of the more famous Casper David Friedrich. The trees in Carus’s Oaks by the Sea (1834-35) are rugged but bare at their tops.  Like Germany after Napoleon, they are battered survivors who will soon flourish again.  Every leaf is executed with tremendous care and beyond the trees lies the way to the open sea. 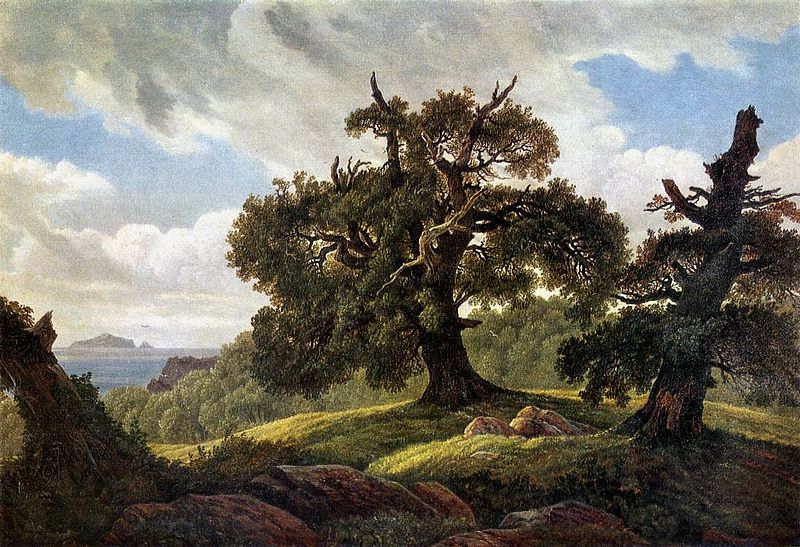 The later, tragic years of twentieth-century Germany are summed up in three objects: the gates of the Buchenwald concentration camp in eastern Germany (one of the first and largest of the camps), Ernst Barlach’s war memorial from Güstrow cathedral, and an ordinary wooden farm cart. Each has a tangled story attached.

A quarter of a million prisoners passed through Buchenwald and a quarter of them died, either through murder or as a result of severe ill-treatment. On the gates of the camp the Nazis inscribed the motto Jedem des seine, meaning “to each his own,” or “to each what he deserves.” Yet the gate incorporated a subtle act of resistance.  The SS had ordered a Buchenwald prisoner, Franz Ehrlich, to design the letters of the sign on the camp gate.  Knowing that the Nazis detested the Bauhaus but knew little about it, Ehrlich, who was Bauhaus-trained, selected lettering closely associated with the by then banned and persecuted institution. Thus, the form of the sign undermines its message.

In 1926, Ernst Barlach designed a hovering angel suspended from above as a WWI memorial for the Protestant cathedral in Güstrow, in eastern Germany. It expresses not heroism, but the sorrow of those who remained after the war: the angel is a spirit floating high above the earth, seeking those who tragically lost their lives in battle.  Not surprisingly, this memorial enraged the Nazis: when they came to power it was melted down and the metal was used for armaments. However, the original plaster cast remained intact, and a second version was later made and installed in the Antoniter Church, the first Protestant church in Cologne, to memorialize the dead of both world wars.  The impoverished cathedral in Güstrow, which was now located in the very un-Christian Communist East Germany, had no resources with which to replace its angel, but, in the 1950s, the church in Cologne generously made a second copy and presented it to them. And now it is in the British Museum, on loan to mark the hundredth anniversary of the outbreak of World War I, that insane conflict that devastated both countries.  Curiously, the statue seems even more moving in the London exhibition than in its home in Güstrow, since it is better lit and can be seen in isolation.  Skill in display has triumphed over genuineness of context, but one needs to know the full story. 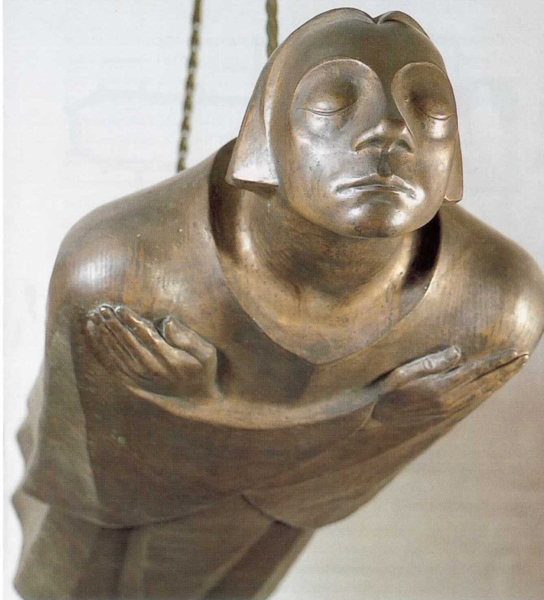 The cart in the exhibition is practical, simple, and unadorned; one that would have been used for conveying vegetables and other farm produce. Yet for Germans, the vehicle is iconic: a ‘refugee cart,’ one of those pulled by the dispossessed Germans fleeing from the advancing Soviet army in 1945. Fourteen million Germans fled or were forced to leave historic German provinces, and the cities where they had lived for hundreds of years. It was the biggest forced population movement in history, and when they had re-settled in West Germany, the former refugees kept their carts as a memory of how they had survived those harsh times.

Some might say that the British Museum exhibition is too big and too disjointed, but it is entirely appropriate for a country whose history has been filled with contrasts and sudden change. Unity and fragmentation have periodically replaced one another. So have times of peace and achievement and episodes of total destruction. Germany’s is an impossibly incoherent history to tell solely with objects, but is rumored that the curator, the British Museum’s director Neil MacGregor, a man who speaks German with a better accent than he does English, is going to do well for being responsible for this exhibition. His good friend  Dr. Angela Merkel, the German Chancellor, is said to be considering making him her key cultural adviser.