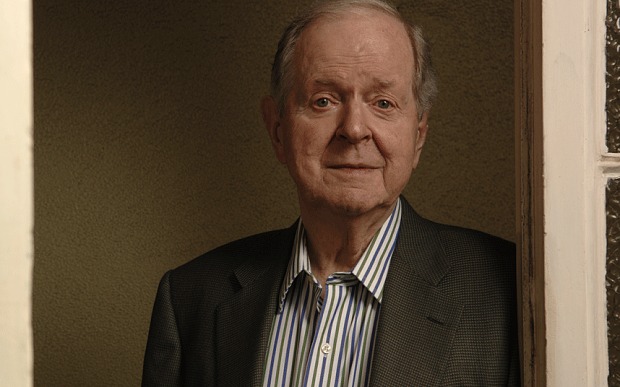 The historian, poet, journalist, and bon vivant Robert Conquest died on August 3 at the venerable age of 98. Bob was born in Worcestershire of an American father and English mother in June 1917. The year seems significant in retrospect, for, like many of his peers, he started his adult life as an ardent Communist only to become one of its most articulate scourges. His magisterial book about Stalin’s infamous tyranny, The Great Terror, was published in 1968 to snivels of opprobrium from the bien pensant left-wing establishment, who complained that he had wildly exaggerated the death toll of Stalin’s effort to bring about utopia. When the Soviet archives were finally opened after the fall of the Soviet Union, it turned out he had actually underestimated the butcher’s bill.

In his Memoirs, Bob’s close friend Kingsley Amis tells the story of an American publisher who, having digested the new currency of The Great Terror after the revelations of the Soviet archives, suggested a new edition. “What about a new title, Bob,” Amis recounts. “We won't pretend it’s a new book, but a new title would be good. What do you say?” Amis wrote: “Bob answered in terms that get a lot of his character into small compass. ‘Well, perhaps I Told you So You Fucking Fools. How’s that?’”

Amis was right about it being a Conquestian line but I am afraid it has to be filed under the forgiving rubric “Too Good to Check.” When I mentioned the story to Bob, he denied its veracity but he did so, I hasten to add, with that famous twinkle that animated his eyes.

Bob was one of those characters who attracted a lot of "too good to check" stories. Educated at Winchester, he won a scholarship to Magdalen College, Oxford. According to The Telegraph, he was sent down for the possession of what an inquisitive dean anathematized as “amorous engines,” Oxford-speak for condoms. I recounted this all-too-plausible story in my original post, but I have it on unimpeachable authority that it is a "complete fabrication." I doubt, however, that he minded its being circulated.

I got to know Bob only late in his life, when he was happily married to his last wife—number four—the redoubtable Liddie. But I suspect that Bob’s friend Philip Larkin was only enviously exaggerating an existential truth when he referred to Bob’s “limitless number of 24 yr old girls” earlier on. I hope so, anyway.

Over the years, Bob wrote more than a dozen pieces for The New Criterion, book reviews, poems, and an important feature article called Liberals and Totalitarianism. Here is a taste of his disabused wisdom from that essay from 1999:

Stalinism and Maoism may be dead, but they still pollute the intellectual atmosphere. More generally the “liberal” input into policy through miseducation is bad enough. “Peace Studies,” usually a thoroughly distorting approach, are taught to defenceless teenagers. And that is apart from the fact that this is one of the many substitutes for education that take up so much of the wasted time now seen in the schools.

Bob had a robust career in England on the fringes of politics, in the neighborhood of academia, but finally settled in the United States, alighting in various colleges and universities before settling in at the Hoover Institution, a politically mature oasis at Stanford University in California.

The world thought of Robert Conquest first of all as an historian, and above all as an historian of Soviet murderousness and tyranny. This was accurate, but he was also a wide-ranging journalist (a fixture, for example, at the late, lamented Encounter magazine in London) and a poet of rare delicacy and poise, in one mode, and hilarious (and ribald) comedy in another. Some of Bob’s limericks are not suitable for mixed company, so I will forbear to quote them here (you can find them, I’m sure, by searching for “Robert Conquest and Toynbee,” for example, or “Robert Conquest and Brigid Brophy”). Here’s an excellent, non-ribald specimen called “Progress”:

There was a great Marxist called Lenin
Who did two or three million men in
That's a lot to have done in
But where he did one in,
that grand Marxist Stalin did ten in.

There’s a lot of Bob’s character compressed in those lines, too.

Perhaps one of his most famous bits of comic verse was his take-off and modernization of Jacques’ famous “Seven Ages of Man” speech from As You Like It:

Seven Ages: first puking and mewling
Then very pissed-off with your schooling
Then fucks, and then fights
Next judging chaps' rights
Then sitting in slippers: then drooling.

I would have put asterisks or dots in that familiar four-letter-word of Germanic origin, but I feel sure that the shade of Bob Conquest would disapprove of such pretended politesse.

All of Bob’s friends noticed that, as he got older, his voice became softer and softer, and it became more and more difficult to understand what he was saying. I sometimes suspected that he knew, and rather impishly delighted in, this. In any event, his own long life seems to have omitted the more disagreeable attributes of his seven-ages tabulation while indulging effulgently in other aspects on the roster. He will be much missed at The New Criterion. I am happy to report that John O’Sullivan, Bob’s friend for decades, will be writing about him for our September issue. RIP.

Editor's Note: This post has been updated to reflect new information.

Roger Kimball is Editor and Publisher of The New Criterion and President and Publisher of Encounter Books. His latest books include The Fortunes of Permanence: Culture and Anarchy in an Age of Amnesia (St. Augustine’s Press) and Who Rules? Sovereignty, Nationalism, and the Fate of Freedom in the Twenty-first Century (Encounter Books).