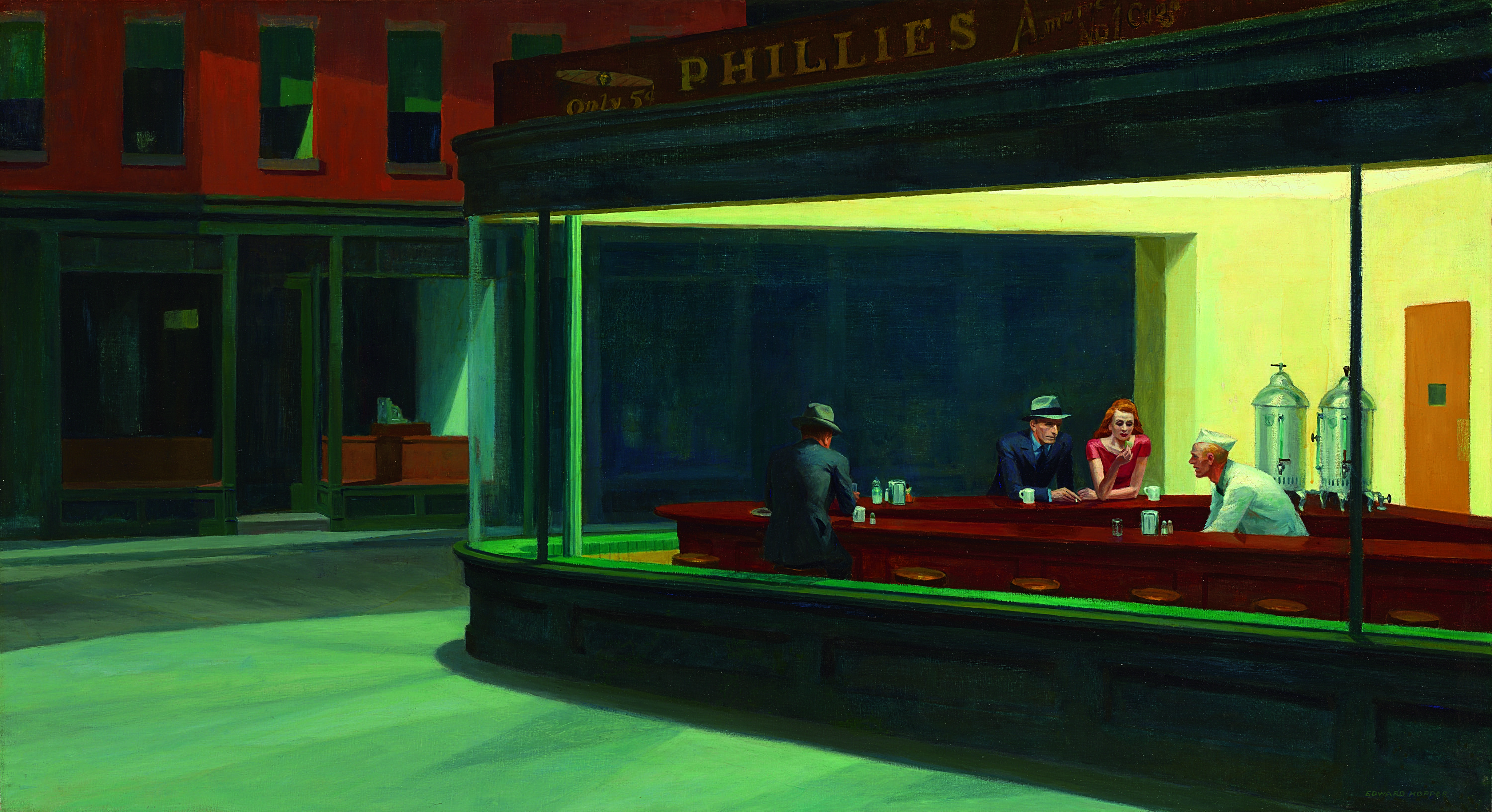 Edward Hopper is in the unenviable position of being an artist whose characteristic style everyone thinks they “know,” whose place in art history is effectively settled, but whose actual work is rarely experienced first hand. His depictions of archetypal American subjects figure prominently in our native imagination. His work, however, is more likely to be seen on postcards, hung in doctors’ offices, or parodied in films and novels than viewed in their original form. In short, it is hard to view Hopper’s work with a fresh set of eyes, but “Hopper Drawing,” ongoing at the Whitney through October 6, allows one to do precisely that. Curated by Carter E. Foster, the Steven and Ann Ames Curator of Drawing at the Whitney, the exhibition is the first large survey of Hopper’s draftsmanship and features over 200 drawings—many of which have never been shown before—and two dozen sketchbook pages shown alongside twenty-one of Hopper’s most well known paintings.

The exhibition begins in a large gallery featuring a brilliant selection of drawings from Hopper’s entire career. Hopper drew incessantly his entire life and, so the show argues, it is drawing that links all his artistic work. 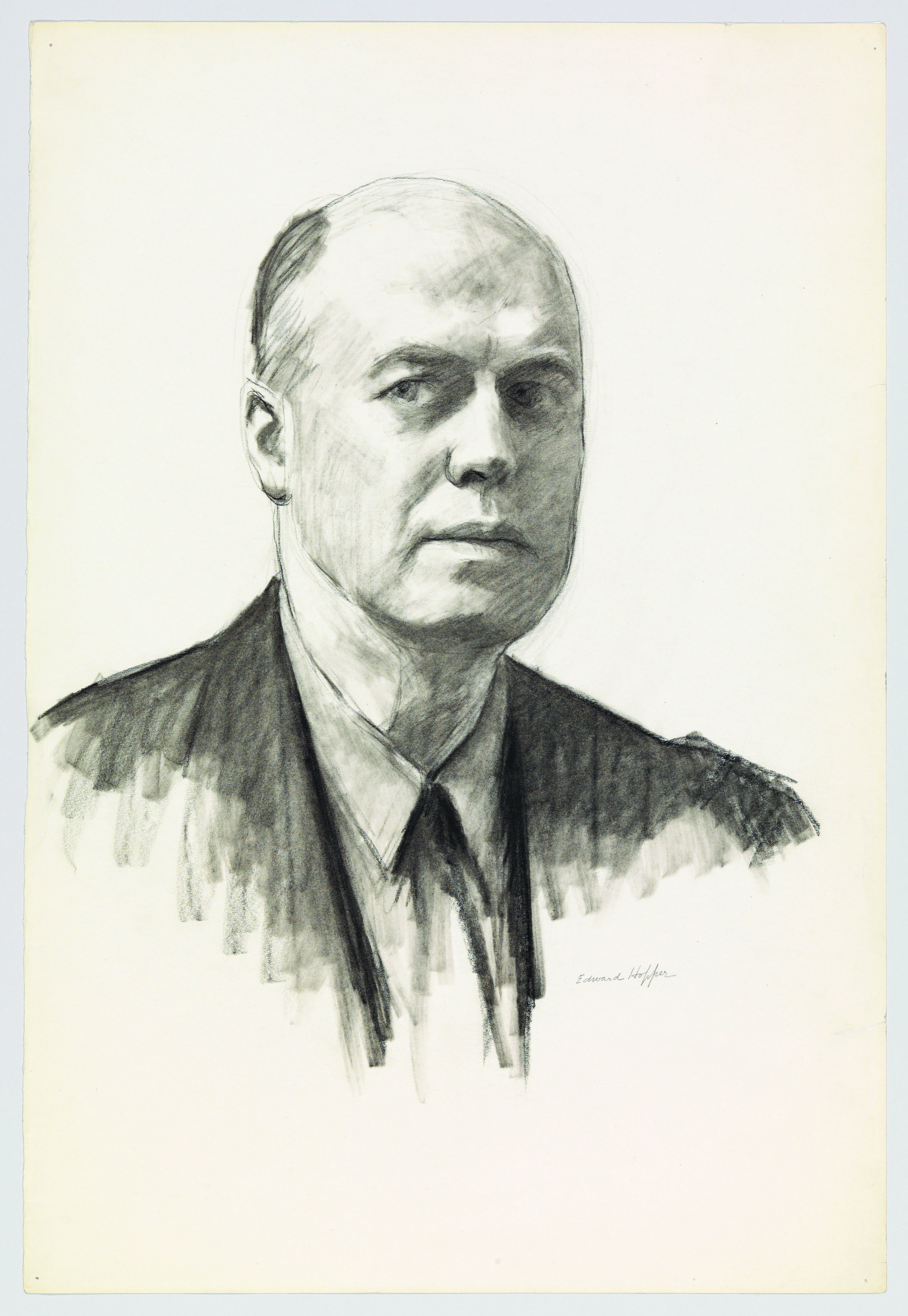 These drawings use a wide range of media and cover diverse subject matter. Rendered in charcoal, pencil, pen and ink, red chalk, and brush and ink, these works depict everything from his pet themes of nudes, empty landscapes, and the peculiar geometry of New England structures to more uncharacteristic subjects like cats, ships, portraits, and self-portraits. Fully embracing drawing for what it is and what it can do, without false rhetoric or over the top effects, Hopper instills each of these simple subjects with a certain dignity befitting of art.

But as skillfully done as many of these drawings are, I’m not sure Hopper would be remembered as he is today if we had only them on which to judge him. Rather, what is most revealing about this exhibition is seen in the relationship between his drawings and the paintings that followed. 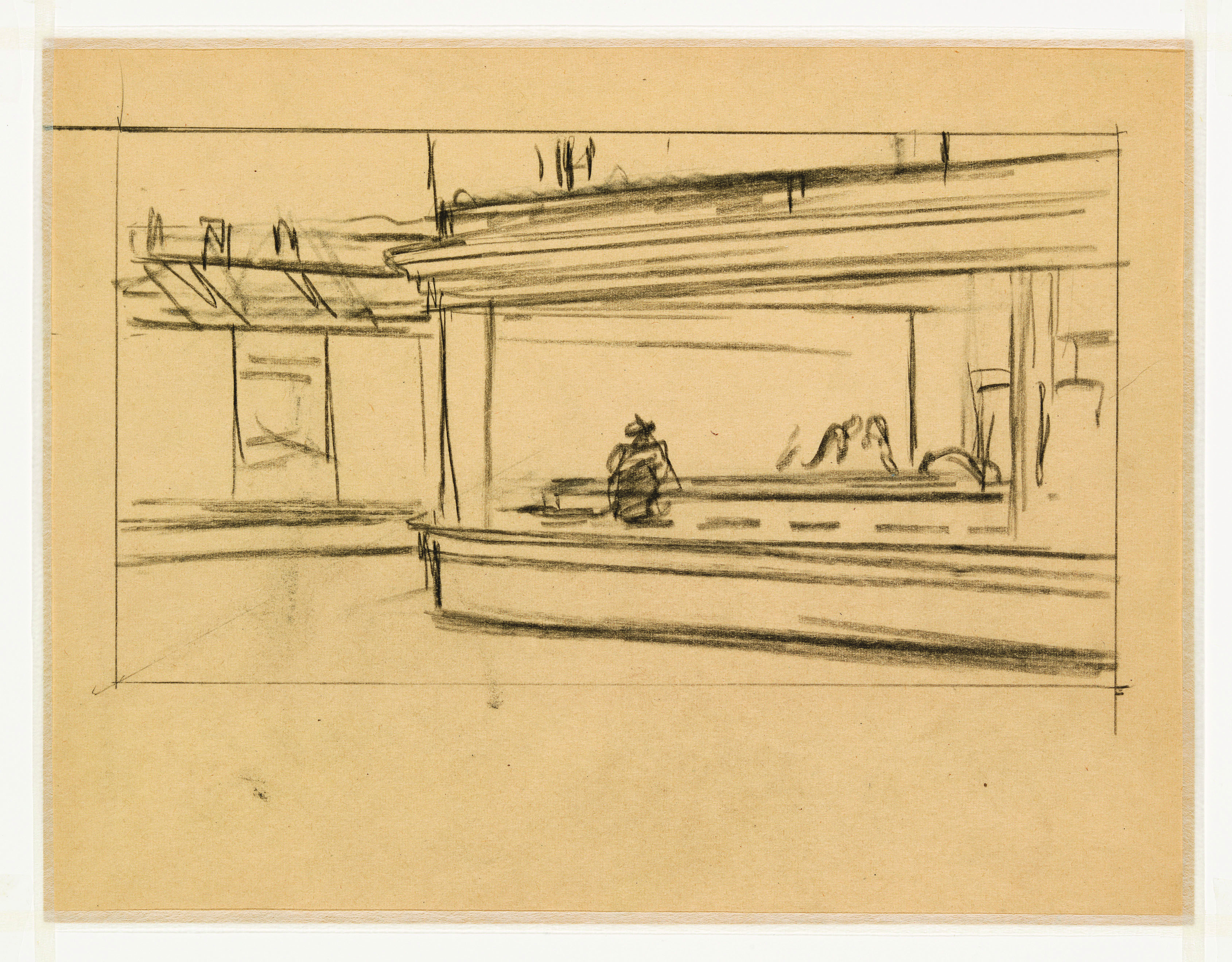 Throughout his career, Hopper was concerned with the relationship between reality—what he called “the fact”—and “improvisation”—the imagination. To my eyes, it is the difference between the two that explains the curious difference in feel between Hopper’s drawings and his paintings. Hopper is without question better at drawing than he is at painting, but nearly as conclusively, his paintings are much more powerful works of art than his drawings. Hopper’s drawings, as great as they are, remain firmly tethered to the world of fact, while his paintings, though sometimes crude and awkward in their conception and execution, are preeminent works of the imagination.

This contradiction at the heart of Hopper’s work was identified as early as 1946 by critic Clement Greenberg, who perceptively wrote that Hopper “is not a painter in the full sense; his means are second-hand, shabby, and impersonal,” and, more to the point, “Hopper simply happens to be a bad painter. But if he were a better painter, he would, most likely, not be so superior an artist.” 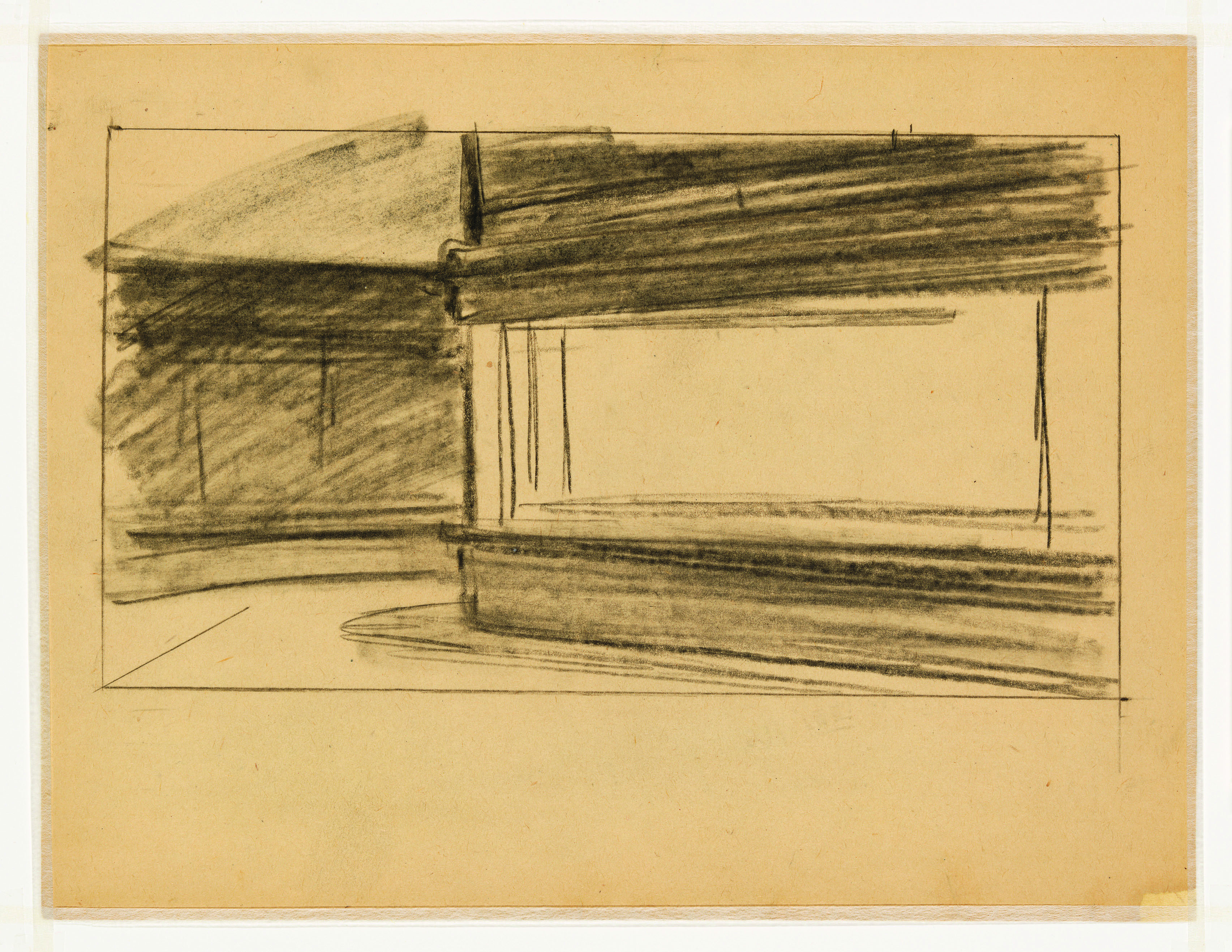 This exhibition fully elucidates Greenberg’s point. Something is lost technically in Hopper’s transition to paint, but there are tremendous gains psychologically and emotionally. Take Hopper’s most iconic work, Nighthawks (1942), which is shown for the first time alongside all nineteen of the known preparatory drawings in a side gallery. It’s a scene nearly everyone knows, a late-night diner with three customers and a man behind the counter. Hopper, here as elsewhere, demonstrates his extraordinary ability to invest an ordinary scene with a perplexing ambiguity, with several narratives suggested but none of them realized.

But in the drawings, the scene is more explicitly spelled out. Hopper himself poses for the males in the scene and his wife, Jo, stands in for the single woman. These are real people, and the drawings convey that sense of reality. In the final drawing before the painting, the full scene is sketched with the couple turned towards each other, looking at whatever is in the woman’s hand (food, cash, cigarettes?); the man working has his head looking down beneath the bar; and the famous man with his back turned is turned so completely that he has no engagement with the viewer. The scene is, more or less, resolved. 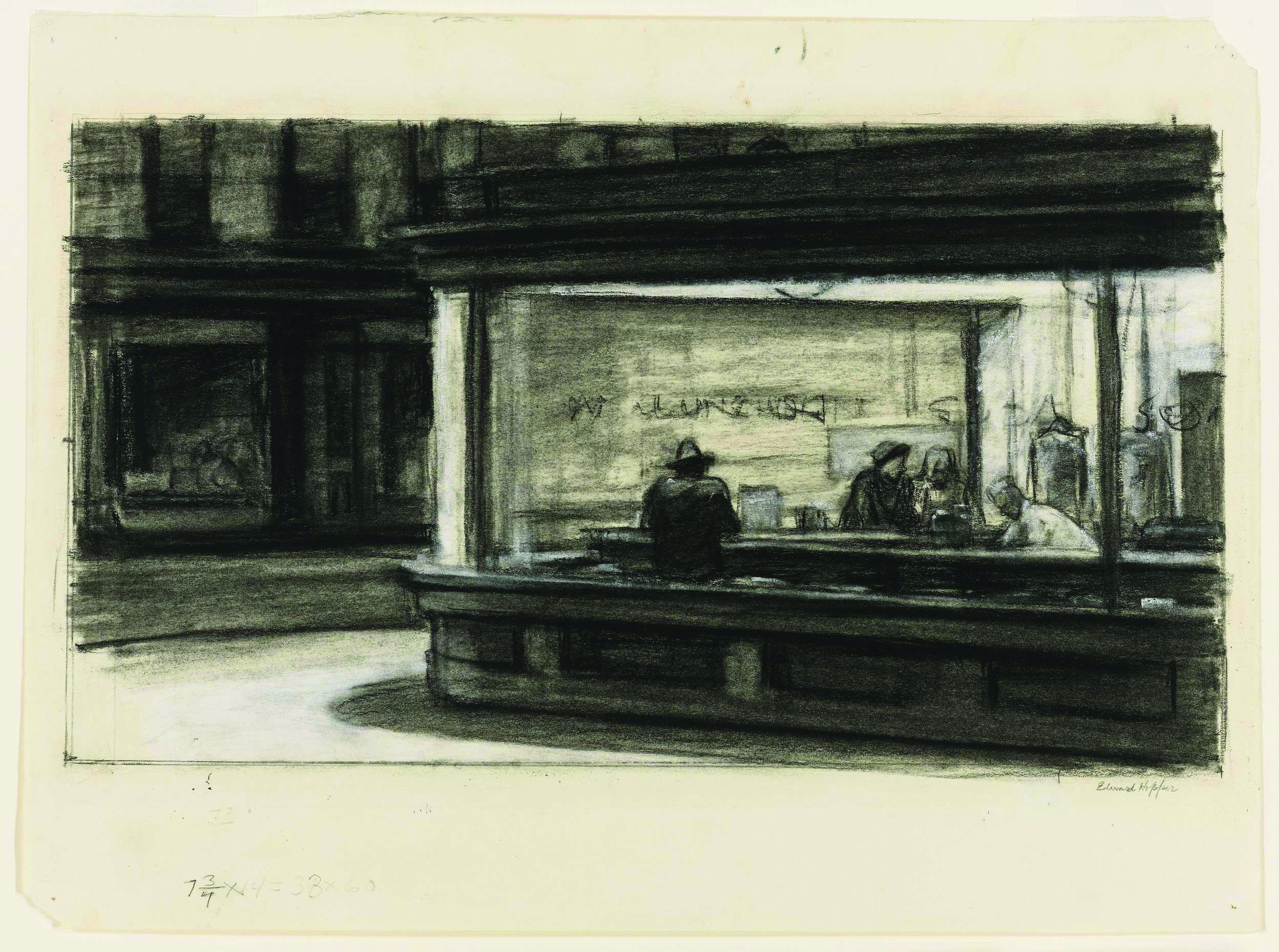 The painting, however, is an abstracted view of this reality, filled with uncertainty. The couple, once shoulder to shoulder, is now separated by an empty, pregnant space. The man with his back to us shows just a sliver of his face, but it is impossible to tell if it is just coming around, turning away, or staring down into a coffee cup or glass of water. Likewise, the man behind the counter seems to be on the verge of doing a number of things without doing any of them. The figures are now everyman and no man, strangely familiar, but also wholly anonymous. They take no part in the emotions they stir, and the loneliness, anxiety, and weariness that have been attributed to them are nothing more than invited projections. Hopper leaves a trail of breadcrumbs for the viewer to follow, but it always—inevitably—leads to an encounter with oneself.

The other galleries are dedicated to certain periods in Hopper’s life, specific iconic works, or classic Hopper themes. One of the most interesting of these rooms, if only because it shows Hopper work so different from what we’ve come to expect, documents his three trips to Paris made between 1906 and 1910. The works are all pastiche, but it’s pastiche of a particularly glorious kind, as Hopper absorbs the influences of Post-Impressionism, Toulouse-Lautrec, and Japonisme, but expands upon them in his work.

Hopper puts all these influences together in his striking but out of character painting Soir Bleu (1914), which features seven figures (far more than a typical Hopper) strewn across a handful of café tables. An off duty clown, bald, still fully made up and costumed, is plopped down in the center of a Toulouse-Lautrec-like ensemble of pimps and prostitutes, an unlit cigarette jutting from his lips. Like the similarly intriguing Boy and Moon (1906–10), Hopper shows himself to be an unusually good student of Japanese prints, with a flat, heavily saturated blue evening sky for a background, broken up only by a few dangling paper lanterns.

One of Hopper’s teachers at the New York School of Art, Robert Henri, once said, “Low art is just telling things, as, there is the night. High art gives the feel of night. The latter is nearer reality although the former is a copy.” If one goes by this standard, Hopper’s art is high art. The introductory wall label tells us that Hopper always found painting difficult, describing it as a perpetual struggle between the image in his mind and the material limits of paint on canvas. In his drawings, there is almost nothing that Hopper cannot do, but they show things as they are. But his paintings, lacking facticity and didacticism, are carefully set stages where sensations and emotions can be experienced.

“Hopper Drawing” opened at the Whitney Museum of American Art on May 23 and remains on view through October 6, 2013.