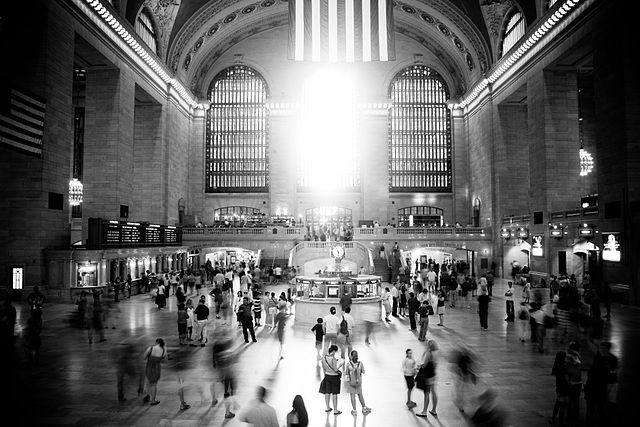 Adjacent to the dramatic and cavernous Main Concourse, with its vast, beautifully decorated barreled ceiling designed by the French portraitist Paul César Helleu, is Vanderbilt Hall, a former passenger waiting room and current home to the exhibition “Grand by Design: A Centennial Celebration of Grand Central Terminal,” on view through March 15. The centerpiece of the terminal’s centennial celebration, the exhibition, put together by the New York Transit Museum, is a multi-media installation featuring a variety of photographs, artifacts, and digital projections about the history and design of this Beaux-Arts icon and how it has shaped modern life and culture in New York, and it’s the perfect way for travellers with a few spare minutes to enjoyably pass the time.

One of the the most important takeaways from the exhibition is that Grand Central, as a Depot, a Station, or, as it is now known, as a Terminal, is really the manifestation of the vision of one man – Cornelius Vanderbilt, whose statue stands before the Terminal’s imposing south façade. Already a fantastically wealthy man from his shipping business (hence the sobriquet Commodore), Vanderbilt set out in his 60s on his most ambitious project – to gain control of all the major rail lines of the Northeast and to transform the “remote” area of midtown into a desirable location.

A seemingly tall order. But Vanderbilt was a shrewd, rough businessman – he once wrote to an associate who had fallen out of favor, “I won’t sue you … I’ll ruin you.” – and once he set his sights on the New York railroad companies, it was only a matter of time before they were his. Having bought controlling stock in the Hudson River, New York Central, and the New York and Harlem Railroads, Vanderbilt needed a grand terminus for his new railroad empire and set about building the Grand Central Depot on 42nd Street. Though Vanderbilt’s original building no longer stands, and it is the centennial of the building that replaced his own that the exhibition celebrates, it was his initial desire to have a dignified and majestic station that put the grand in Grand Central in the first place.

The exhibition is nothing if not comprehensive, and in addition to Cornelius Vanderbilt’s story it covers a bevy of other engaging topics related to the terminal. It features many interesting photos and design plans of the building’s important architectural and engineering innovations, information about the subsequent development of midtown Manhattan and the emergence of suburbs and a commuter culture, amusing sections on luxury long-distance travel, especially the famed 20th Century Limited train from New York to Chicago, and the many ways the terminal has been used over the years by broadcast studios, films, political rallies, advertisers, and even an art school, which occupied the building’s seventh floor from 1922 to 1958.

The exhibition also touches on the terminal’s more recent history with sections on the decline of rail travel in the 1970s and 1980s, the renovation of the terminal in the 1990s, and a particularly moving section on the terminal in the aftermath of the September 11 attacks, featuring a wall dotted with missing person notices for neighbors and loved ones that were posted on the walls of the terminal’s most trafficked passageways. Looking towards the next centennial, the exhibition also considers the terminal’s future, with prominent coverage given to the Long Island Railroad East Side Access project in a section that feels more like an advertisement than anything else.

Though one appreciates all the information and history put together in a very engaging and sufficiently amusing way, one leaves the wide-ranging exhibition wondering if something was missing in this celebration of this grand structure. The brilliance of Grand Central, and the primary reason one still marvels at it today, lies in the building itself, and in its miraculous design and ornamentation, which touches everything from pediments and windows to cornices and light fixtures, making even the most minute detail an integral part of an imaginative and very grand whole. A sign calling viewers to “Look up!” or “Look around!” at the light passing operatically from the windows above, bathing the marble floors with a luminous beauty, or at the pilasters topped with rippling acanthus leaves, or at the famed “Grand Central Terminal Clock” made of brass and precious opal, might have been a welcome addition. For these are the things – architectural wonder masking extraordinary technological sophistication – that remind us that Grand Central Terminal truly is, as the exhibit title suggests, “Grand by Design.”