Time was when the phrase “twin cities” meant those two wholesome burgs straddling the Father of Waters, four hundred miles northwest of Chicago. Nowadays, if I lived in Saint Paul, such intimacy with the progressive shambles of Minneapolis just across the bridge would be embarrassing. Therefore, I propose new candidates for the twins’ slots: America’s two, by most measures, greatest cities, New York and Chicago. Both were places upon which the rest of America historically has looked with pride, or at least with awe. Their claims to greatness were equal but not identical. New York was the great world city, facing outward down its deep harbor to the Atlantic and to the world. Chicago was the great American city, set beside its freshwater sea and facing westward across the continent. Yet the two together, in their heft and consequence—their magnetic pull for millions—made for something unique. Unplug New York and Chicago, and the American story is left with a gaping hole. Back in the railway age, it was telling that the greatest train between them carried the name of neither, but rather of their moment: The Twentieth Century Limited, “The Most Famous Train in the World.”

The twenty-first century has been less kind, and so I must now speak of this greatness in the past tense, because I believe we can no longer look upon these two cities in the same way. But first let us pause to consider evidence of their older reputation and the fortitude that underlays it. New York we shall leave to speak for itself, and shall concentrate on the “second” of our twins, Chicago. That phrase, the “Second City,” came, no surprise, from the pen of a New Yorker, A. J. Liebling, in his three-piece slash-and-burn series for The New Yorker, published in book form as Chicago: The Second City (1952). The Steinberg drawing opposite the title page caught the attitude: a façade of fancy high-rise apartment buildings (emphasis on “façade”) with a barn, some “three-flats,” an alley and a corner tavern running off to the right, toward the gutter as it were. “Second City” became in time a defunct cliché. The place has seemed to attract cliché peddlers, starting with everyone’s favorite socialist from Galesburg, Carl Sandburg—who gave us Big Shoulders, Hog Butcher, Player with Railroads and all the rest—but then moving rather steeply down the scale to the likes of Nelson Algren and Studs Terkel.

Chicago has also nurtured and attracted its cliché busters, whose sympathy for the place and honesty about it yield a truer picture. Theodore Dreiser, at the turn of the nineteenth century, saw Chicago as “enticing, throbbing, slightly terrifying.” The words are Joseph Epstein’s who, writing about his hometown in the 1980s, took the same blade to both Sandburg and Liebling: “My guess is that by the time Sandburg wrote his poem, the City of Big Shoulders had already developed a fairly pronounced slouch.” Jan Morris, also in the Eighties, sensed a has-been weariness and missed “a presiding symbolism” that she remembered Chicago having back in the days of the old mayors: “Those all-powerful grandees, whatever their merits, were themselves Chicago, living exemplars of its public tastes and standards.” Mayors like Thompson, Kelly, Kennelly, and of course Daley—love these men or hate them, you could not say they were not weighty characters, or that the city did not grow and prosper on their watch. Yes, they ran it by patronage and machine, the corrupt yet strangely efficient infrastructure that is now all but disappeared. The symbols rested on the reality of an understood past: Fort Dearborn, the Fire, the steel-frame return from the ashes, the world’s first skyscrapers, the Fair, the stockyards, the flat city of three-flats, bungalows, and neighborhoods stretching endlessly in every direction but east, and (Sandburg got this much right) all those railroads that met and crossed in Chicago. And do not forget all those ethnic groups, who didn’t need to love each other in order to get on with life, and who just kept on coming.

“To a serious Chicagoan,” Epstein concluded his slightly slouchy salute, “life is inexhaustibly interesting, full of secret splendors . . . where the sensible working assumption is that everything is a fake, except those people and things that one discovers are not, of which Chicago, being the kind of city it is, has a great deal more than its share.” Epstein still lives in Chicago. I lived there too in the 1980s and 1990s, and my wife’s family has claimed Chicago as home since before the Fire. We raised our children there and do not regret it. The prospect of returning for a visit, to family or just for a couple of nights in the big city, has never failed to stir the blood. But in 2020? 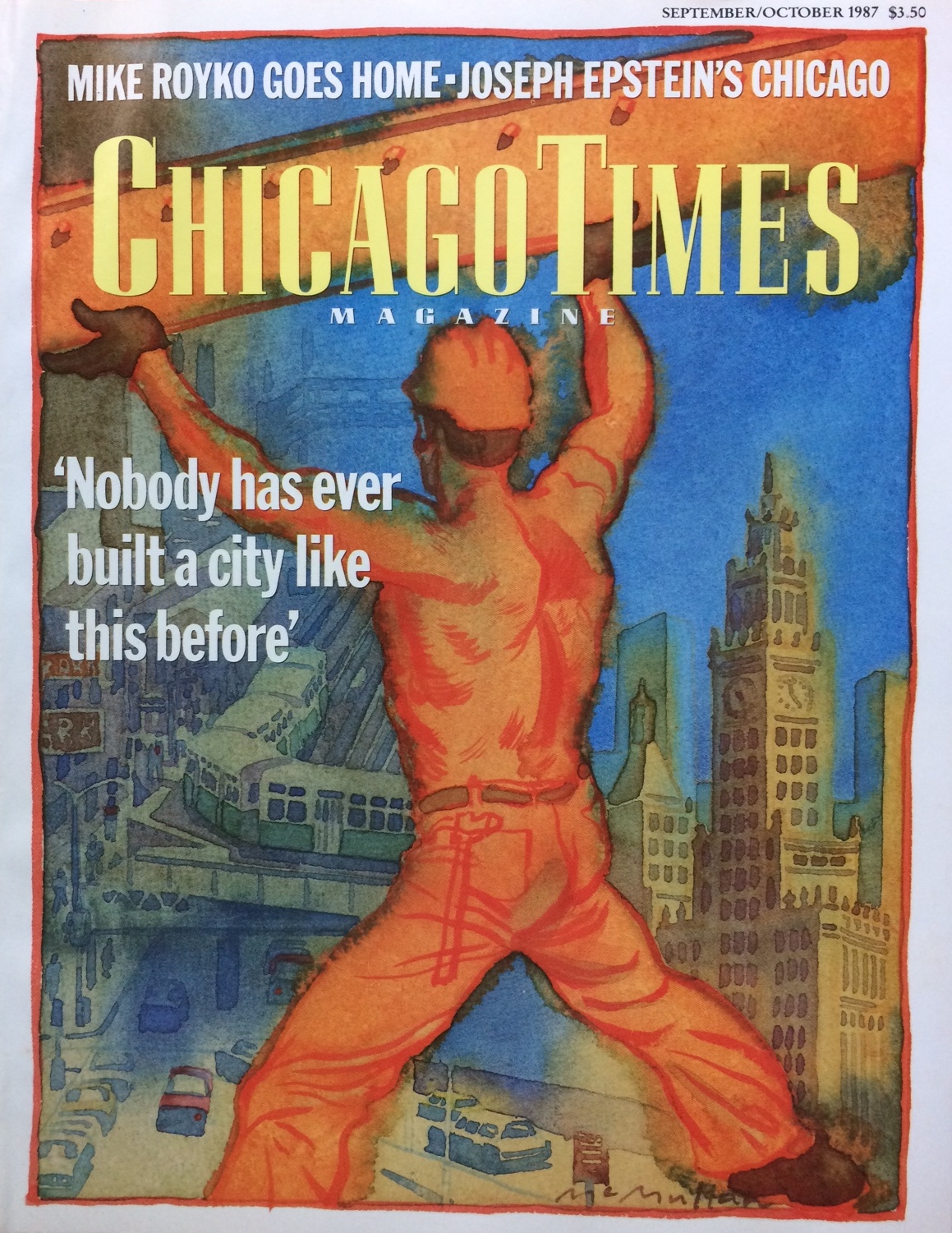 These days the great big city by the great big lake shares with its historic rival east of the Hudson not pride of place, but shame of place. They are twins in un-seriousness about things of value. “The City that Works,” the elder Mayor Daley’s famous boast, doesn’t. Morris got it down to three words: “Boss no more.” Epstein’s slouch is compounded now with a limp or worse. Both of these once-stunning cities are governed (or should that be misgoverned or ungoverned?) by clownish mayors and minions who are little more than spokesmen for a mob (more insidious than the Syndicate, the Organization, and the Boys of old) that is at war with the very bourgeois capitalist culture on which they were built and which they once proudly proclaimed.

From the small southern town where I live, it is still possible to get to Chicago (New York too) the old-fashioned way, by rail. Our train rattles through all of three times a week but, if you don’t have a demanding schedule, it gets the job done. You can book a sleeper (else you must be masked for the entire overnight journey), enjoy the scenery and dinner, and arrive in Sandburg’s old player with railroads next morning by ten. From the dark shed you wander up and out, through the 110-foot barrel-vaulted sky-lit waiting room of Union Station. Places like this (soulmates of Grand Central, Thirtieth Street Philadelphia, Washington Union) had a theatrical as well as a practical purpose, as monumental gateways to great cities. Step out at Washington, and you see the Capitol dome. Step out in New York and you see, well, just about everything. Step out in Chicago, into the cathedral-like colonnade on Canal Street, and you see the bascule bridges, the Civic Opera House, the Daily News Building, the Loop. You have arrived, young man (or woman): “Go for it!”

Chicago and New York are cities like nobody ever built before, but they are not happy places right now, their sadness pathetically self-imposed. I hesitate to return to either, and I hate my hesitation. Even the old anthems seem off-key, whether it’s “New York, New York, a helluva town/ . . . people ride in a hole in the ground,” or “On State Street that great street I just want to say/ they do things they don’t do on Broadway.” The New York subways are less salubrious than ever, and filled with masked men and women. While out on the Lake Michigan shore, the problem may be that they do too much of what they do on Broadway. Frank Sinatra and Judy Garland sang Chicago and New York right into the mid-century American imagination. Both artists have long since departed. The cities they celebrated now feel perilously close to their departure, too.

Even so, when I do summon up the gumption to board the westbound again, I know that, despite all, I will experience afresh next morning the old thrill of arrival. It is, after all, what great cities are for.

Timothy Jacobson writes from the Shenandoah Valley in Virginia.