Readers of The New Criterion and this weblog will remember that Encounter Books recently published a new edition of Darwinian Fairytales, a blistering attack on certain aspects of Darwinian and neo-Darwinian theory by the late David Stove, one of the most brilliant and unfairly neglected philosophical minds of the last century. (High praise? Yes, but I am not alone my admiration: "The greatest philosopher of the twentieth century may . . . have been a somewhat obscure and conservative Australian named David Stove.")

I wrote a brief introduction for this new edition, and I have been pleased to see that the book is enjoying a new lease on life. I am also pleased by the terrific cover: 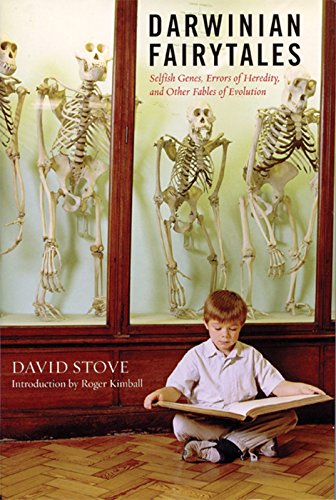 Of course, the neo-Darwinian brotherhood detest the book, but that was only to be expected: one of the minor benefits of Stove’s book has been to reveal how extraordinarily sensitive to criticism this group is. Never mind that Stove repeatedly adverts to Darwin’s great genius, placing him in his personal pantheon of culture heroes along with Shakespeare, Purcell, Newton, and Hume; never mind that Stove acknowledges the extraordinary power of the theory of evolution, describing it in one place as "the most successful scientific theory in the history of biology." Nope: that’s not enough: what is wanted is abject, uncritical acceptance of every detail of the Master’s theory--and not only the Master’s theory, but even more the theories of his followers and disciples: the theories, for example, of Richard "Mr. Selfish Gene" Dawkins.

It’s pretty comical, really. Stove points out some glaring deficiencies in Darwinian theory. The Brotherhood retaliates not with arguments or refutations but with ex cathedra denunciations--Darwin was a scientist, you see, whereas Stove was merely a philosopher, ergo what Stove says has no scientific credibility. (Some of the comments on the Amazon page for the book adopt this strangely non-consecutive mode of argumentation. Quoth one reviewer: "This author is a ’professor of Philosophy.’ Makes him totally qualified to write about a SCIENTIFIC area, right?" Well, no: the fact of Stove’s having been a professor of philosophy doesn’t necessary make him qualified to comment on Darwinian theory; but his study of that theory might. Is this really a difficult idea to grasp?)

Readers interested in the controversy will find the commentary posted by the philosopher Scott Campbell illuminating.

Now, whenever I mention this book some people jump to the conclusion that Stove must be -- and by implication that I must be -- a creationist, or at least some sort of religious crank. Don’t do this. Be ashamed if you do. Is the man (i.e., me) who created Skeptics in the Pub likely to be a creationist? Nope. I’m an atheist, and so was Stove. You can still be an "evolutionist" like me and find the points Stove raises enlightening.

Read the whole thing--and an interesting passel of responses--here.

Those of you who do not yet own the book can get it from Amazon here or direct from Encounter here.

Roger Kimball is Editor and Publisher of The New Criterion and President and Publisher of Encounter Books. His latest books include The Fortunes of Permanence: Culture and Anarchy in an Age of Amnesia (St. Augustine’s Press) and Who Rules? Sovereignty, Nationalism, and the Fate of Freedom in the Twenty-first Century (Encounter Books).