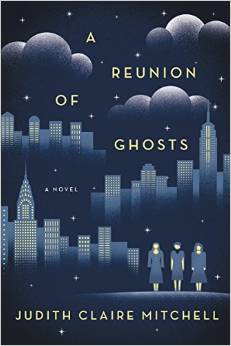 Fiction: A Reunion of Ghosts, by Judith Claire Mitchell (Deckle Edge): As the twentieth century closes, three middle-aged sisters decide to kill themselves. Their plan is in keeping with a family tradition of suicide, sparked in part by a great-grandfather who invented the chemical process that created the chlorine gas used in WWI and was a predecessor to Zyklon B. Departing from family tradition, however, they decide to leave a note. Though the book is dark, the author is able to move nimbly through time, and balances the novel’s weightier themes with the sharply funny, fiercely unsentimental perspectives of her three protagonists. —CE

Nonfiction: Heretic: Why Islam Needs a Reformation Now, by Ayaan Hirsi Ali (Harper): Ayaan Hirsi Ali’s newest book will be released tomorrow and it appears to be as brave and insightful as her previous ones. In Heretic, she strongly advocates for an immediate Muslim Reformation, one that will bring Islam into the modern era and help it reconcile its core beliefs with the tenets of free societies. There are five key changes she proposes that will bring about this Reformation and may help to defeat radical Islam, one of the biggest threats existing in the world today. –RH

Poetry: Measure for Measure: An Anthology of Poetic Meters, edited by Annie Finch and Alexandra Oliver (Everyman’s Library): After a century dominated by free verse, it would seem that metered poetry is making a comeback. The anthology contains brief explanatory headnotes and draws from a wide range of traditions to illustrate meters both familiar and exotic, bringing together some of the best rhythmic lines in literature. —CE

Art: “Lothar Osterburg: Babel” and “Intricate Expanse” at Lesley Heller Workspace (March 15-April 19): Two years ago, through the program "Arts for Transit," New York subway riders were treated to a remarkable image in the trains called “Zeppelins Docking in Grand Central." This steampunk photogravure and chine collé, of blimps floating through a detailed model of Grand Central Terminal, was the creation of Lothar Osterburg. Now at Lesley Heller Workspace, Osterburg returns with a set of photogravures of the Tower of Babel rising over the modern metropolis. The photos, and the remarkable model made of "wood, matboard, found book pages," straight out of Bruegel, are on view. Meanwhile, in the second gallery, The New Criterion's own Mario Naves has curated "Intricate Expanse," a group show featuring Steve Currie, Laura Dodson, Karl Hartman, Tine Lundsfryd, Sangram Majumdar, and Maritta Tapanainen. —JP

Music: Heidi Stober at Carnegie Hall (Friday, March 27): Heidi Stober, who made a charming appearance at the Met in last season's The Magic Flute, makes her New York recital debut in Carnegie's Weill Hall on Friday, with Craig Terry at the piano. Lesser-known works by Jake Heggie, Alec Wilder, and Henry Leland Clarke accompany chestnuts by Schubert and Strauss. —ECS

From our latest issue: Travels with Paddy, by Ben Downing: A review of Walking the Woods and the Water: In Patrick Leigh Fermor's footsteps from the Hook of Holland to the Golden Horn, by Nick Hunt.