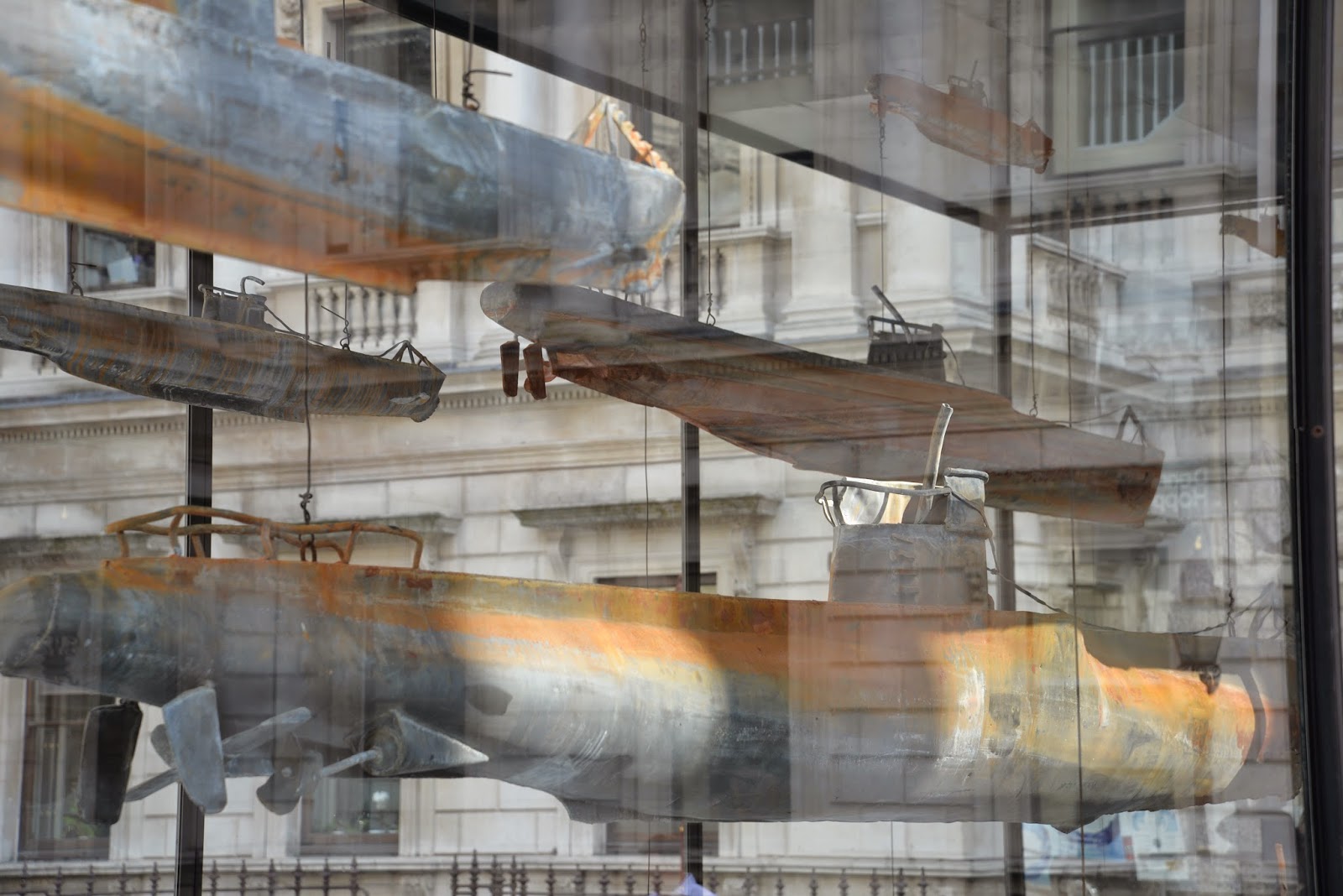 Who would have ever thought that models of rusting U-boats in a huge glass tank would dominate the revered Royal Academy Courtyard?  The German painter and sculptor Anselm Kiefer named Velimir Khlebnikov:  Fates of Nations, The New Theory of War (2011-2014) after the early twentieth-century Futurist poet and numerologist, who calculated that decisive sea battles always occur every 317 years. The sequence of Lepanto, Trafalgar, Tsushima, Jutland, Midway does not really support this hypothesis, but the sinister, hovering U-boats work well in bringing war to mind. In this they fit well with many of Kiefer’s other pieces, uncomfortable reminders of a tragic recent past. 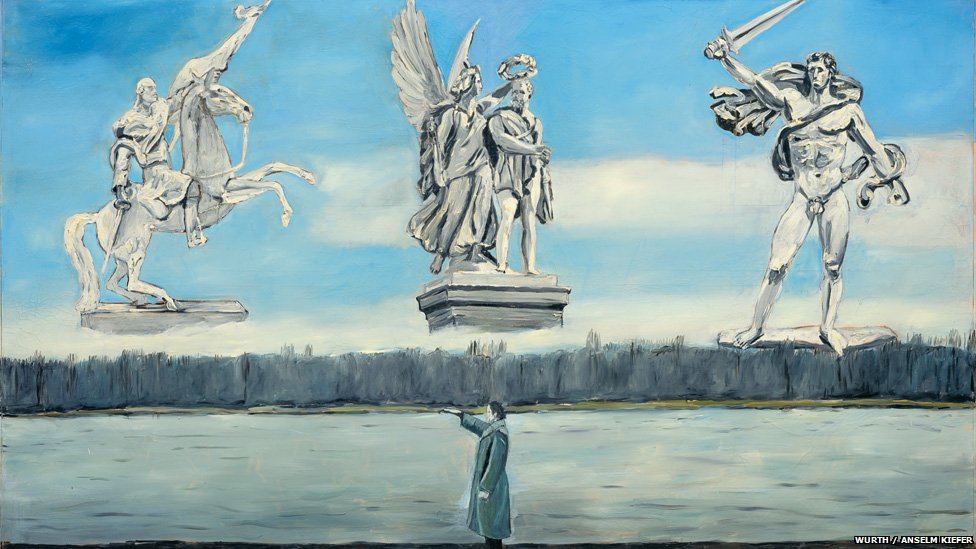 Kiefer has been called “a colossus” by the organizers of this first British retrospective of the artist’s work, and his pieces are quite literally colossal: on several occasions a single exhibit fills an entire wall of one of the Royal Academy’s larger galleries.  He is clearly the greatest German artist of his generation, and today his work, which often seeks to confront his country’s history, is having more impact in London than that of his local contemporaries.  The Royal Academy retrospective consists of work spanning his forty-year career, including several new pieces created for the Academy’s space.

In a curious way, Kiefer has shown that size really does matter, for those of his works that have the greatest physical dimensions are also the ones that have achieved metaphorical greatness.   Some of the exhibits are positively (though he would claim negatively) Wagnerian, notably Parsifal I, Parsifal II, Parsifal III (1973) and Nothung (1973). These are various portrayals of a massive attic in a wooden house, a masterly capture of the dark grain of the wood and the light cast on the floor from a window with six panes.  A cot sits in one corner of the room and a sword spattered with real blood stabs into the floor; one can almost smell the wood. 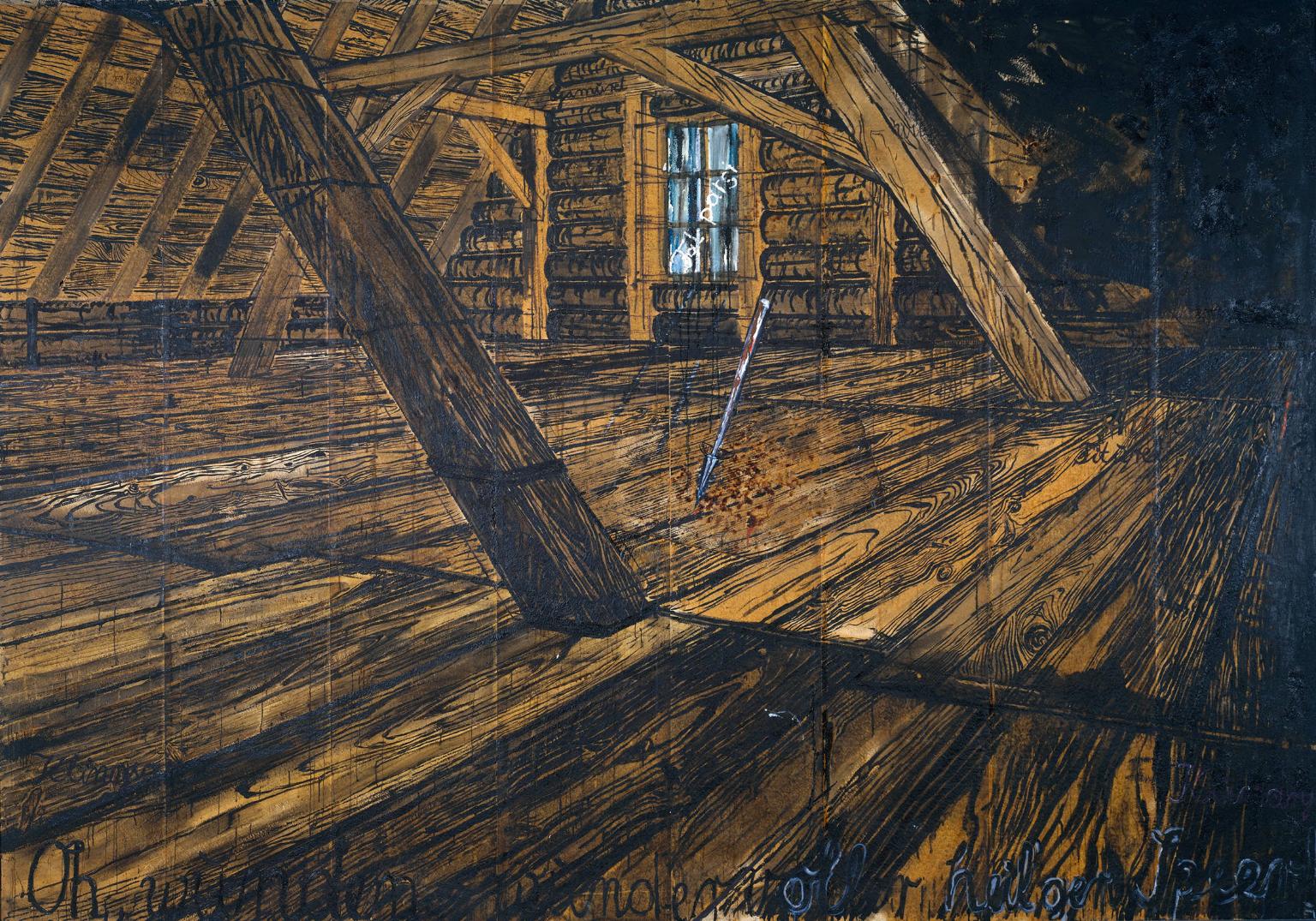 Kiefer says he is trying to reclaim the ancient German and Norse myths from the unpleasant links to aggressive nationalism that they acquired in the twentieth century.  The piece stresses Parsifal’s task of restoring peace to the kingdom of the Grail, a theme that serves as a mirror to the struggle to rebuild a peaceful West Germany after 1945.  The names of the worst of the left-wing terrorist enemies of that peace, the members of the murderous, Stasi-financed Red Army Faction known as the Baader-Meinhof gang, are tucked into one corner of Parsifal III.  Kiefer has done what the Baader-Meinhof falsely claimed they were doing: confronting Germany’s Nazi past.

Destruction is the theme of Kiefer’s many paintings of ruins, which in some cases took him years to complete.  Interior (1981) and To the Unknown Painter (1983) show dark remnants of the kinds of grandiose neo-classical buildings that Albert Speer planned for Hitler.  Ironically, Speer built into his plans ideas for how his constructions would appear in the distant future, when they had become the iconic ruined monuments of a heroic Teutonic past.  Kiefer’s renderings are un-heroic, simply foreboding. 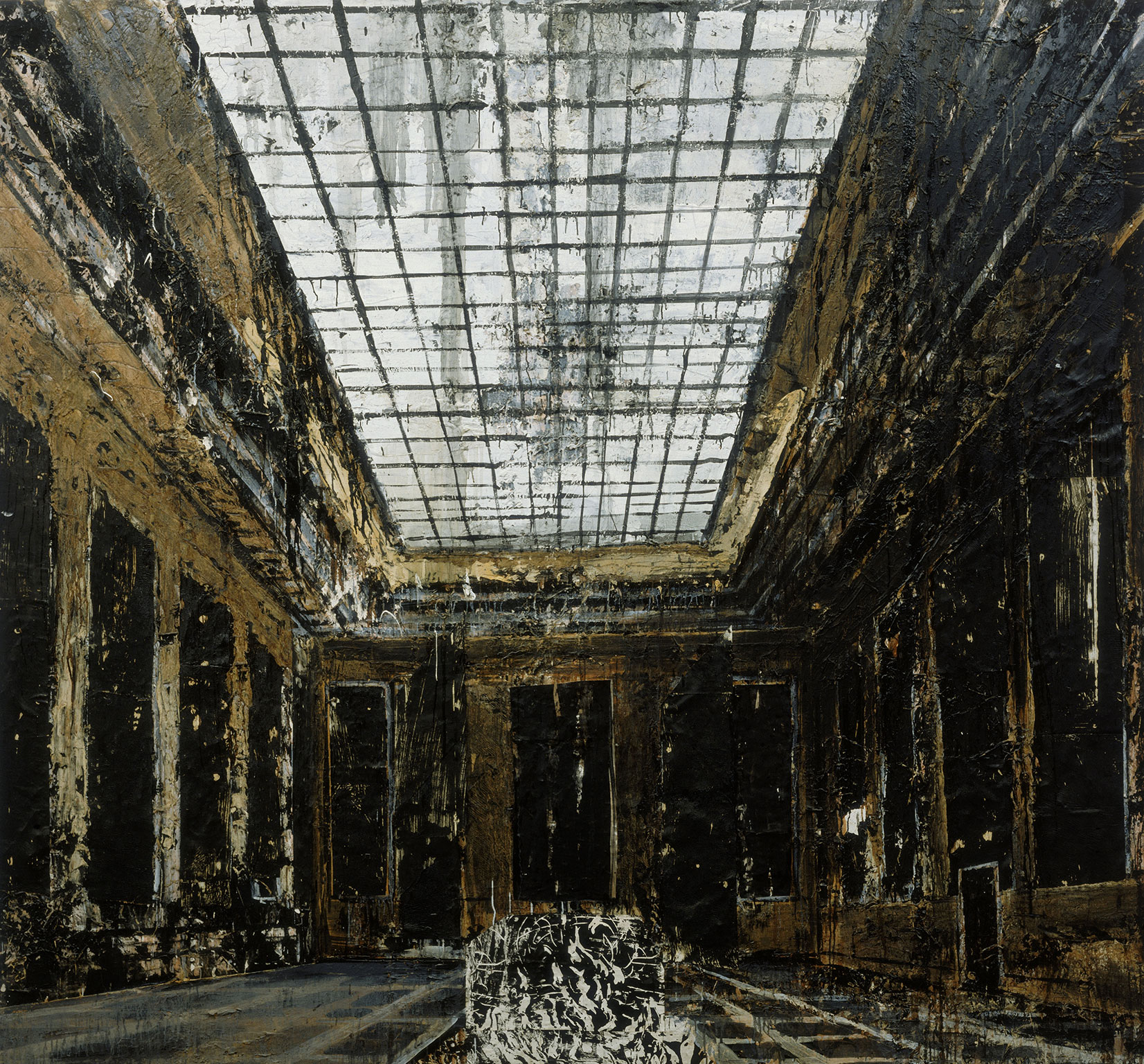 The artist knew a good deal about destroyed places: as a child in Germany after 1945, they had been his playground.  But his fascination with ruins is not limited to twentieth-century Germany; in The Fertile Crescent (2009) he has sought to capture what remains of the earliest human civilizations, those of Mesopotamia.  To make Osiris and Isis (1986-1987) he uses a television circuit board, from the copper wires of which hang ceramic fragments forming a pyramid.  His drive to create paintings that are truly three-dimensional culminates in For Ingeborg Bachman, The Sand from the Urns (1998-2009), a piece made of shellac and sand on canvas.

Yet Kiefer is not just a painter of destruction, desolation, and decay.  He brings a far more delicate touch to his exquisite flower paintings, From Oscar Wilde (1974) and For Genet (1969).  The same lightened sensibility can be seen in Tandaradei (2014), a huge field of flowers that refers to Unter der Linden, an old German poem by Walter von der Vogelweide. In it, a man and woman make love under the lime trees, atop the flowers of the meadow.  The birds, the only witnesses to their secret meeting, sing tandaradei. 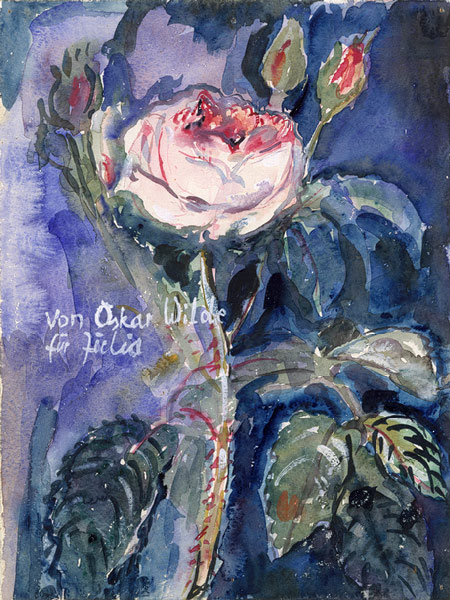 In many of Kiefer’s works, it is far easier to feel the rubble than to imagine a life that blooms. But the artist claims that “Rubble is like a blossom of a plant,” and, in his art, Kiefer sees time and destruction as leading to rebirth.

"Anselm Kiefer" opened at the Royal Academy of Arts in London, England, on September 27th ,and remains on view through December 14th, 2014.