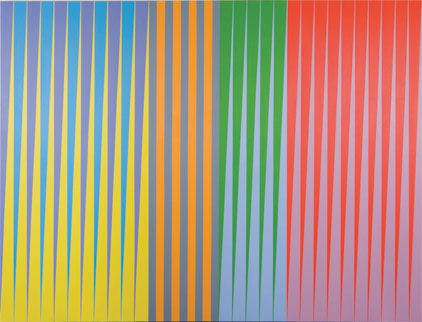 In May 2005 I wrote about an exhibition that stopped me in my tracks. The show was called “Raising the Bar” at Sideshow Gallery in Williamsburg, Queens, with paintings by Thornton Willis and James Little.

Stop the presses! Hold that headline! Run a retraction! All of two pages ago I doubted whether painting would ever be “back.” But yes, Virginia. Painting is Back. At the Sideshow Gallery in Williamsburg, “Thornton Willis and James Little: Raising the Bar” has become the sleeper hit of the season, with a run extended now into May. I caught these two painterly statesmen just hours before deadline. With richly brushed surfaces of oils and wax, James Little proves that not all hard edge is created equal: the vibrating colors and racing lines of Exit Strategy (2004) dazzle the eye. Thornton Willis, meanwhile, has worked through Minimalism and Cubism since the 1970s to arrive at a totemic synthetic of modern painting. Dog Fight (2002), my favorite piece of the show, even evinces Beckmann. Willis builds up heaping layers of Cubist castoffs, drafting marks, and colored planes. Little lures us in with sensuous surfaces of silk and quicksand, and colors as sharp as needles. The two play perfectly together—a double-stroke engine in paint and a humming dynamo of potential.

Readers of this space will be aware of my continued interest in Willis, who recently finished a second solo show at Elizabeth Harris Gallery. Now James Little is back with his own solo exhibition at June Kelley gallery in Soho. I went to the opening last night and will have more to say about it in my next gallery chronicle. Little’s treatment of surface is unique. He builds up his painting surfaces with twenty coats of encaustic, a combination of pigment and wax that he formulates and brushes on at high temperature. No mere masking-tape hard-edger, Little needs to be seen in person. His exhibition will be on view through June 7.