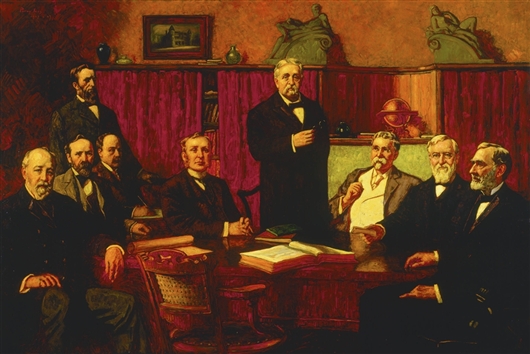 “First Board of Trustees of Detroit Museum of Art” (1907), Percy Ives. Via Detroit Institute of Arts.

The city of Detroit is beset by several unforgiving narratives. We need not recount them here because few, if any, are present in the Todd Levin’s exhibition “Another Look at Detroit,” on view at Marianne Boesky and Marlborough Chelsea this summer. Instead Levin approached his hometown with the lens of the longue durée: rejecting the events that have only recently clouded the city’s stature as a proud beacon of cultural production.

At Marlborough Gallery, Robert Duncanson’s Landscape (1870), Percy Ives' group portrait the First Board of Trustees of Detroit Museum of Art (1907), and the urban realism of Zoltan Sepeshy’s Industrial Detroit (plant II) (1929) set the tone for the cultural milieu of Detroit far in advance of the boom and bust cycle. The exhibition parades a range of American themes, such as the roots of Manifest Destiny, the later waves of cosmopolitan luminaries, and some of our most enigmatic postmodernists, especially Detroit natives James Lee Byars and Mike Kelley.

Even though Levin takes a revisionist tack, it is still impossible to ignore the industrial theme. Detroit’s history and that of the automobile are closely intertwined, as is much of the iconography reproduced in the city’s art. Diego Rivera painted a portrait of Edsel B. Ford in 1932, a muted depiction of the man who had commissioned Rivera’s Detroit Industry murals at the Detroit Institute of Art, completed shortly thereafter. It is hung adjacent to Ray Johnson’s abstract rendition of Edsel’s son, Henry Ford II, who soon succeeded his father at the helm of Ford Motor Company.

“Edsel B. Ford” (1932), Diego Rivera. Oil on canvas, mounted on Masonite. Courtesy of the Detroit Institute of Arts.

There is a celebration of Detroit’s vernacular, whether it is in the Ford upholstery samples, posters for classes at Cranbrook Academy of Art in nearby Bloomfield Hills, a Shinola bicycle, or several examples of decorative arts and design from masters like Harry Bertoia and Eero Saarinen. Even the modern and contemporary works make steady use of industrial forms and materials including the machinist cacophony of Julie Mehretu’s abstract Untitled (Brigade) (2005), the steel reinforcing rods in Michael C. Luch’s Untitled (Rabbit) (1977), and John Enger’s Doug’s Smoke (1975), which typifies the unrefined style of the Cass Corridor artists. Detroit’s status a pioneering city in the history of techno music also is on display with several vinyls from Jaun Atkin’s Metroplex records—the creator of the now mainstream genre.

Mike Kelley and James Lee Byars in particular seem like suitably lucid symbols for the complexity of Detroit’s place in the history of art. Kelley’s painting and sculpture were rooted in his midwestern Catholic upbringing, yet constantly synthesized elements of physchological depth with bold formal experimentation. Kelley was as boundless as James Lee Byars was metaphysical—his preferred medium being “thought”. Both were native sons of the Motor City who went on to broadly impact the trajectory of contemporary art. 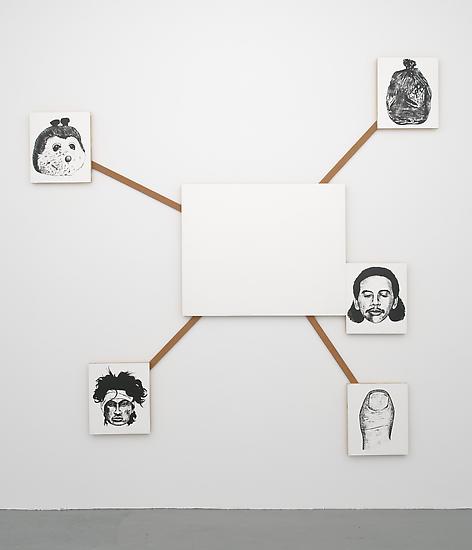 The exhibition reads as a broad roster of important artist’s whose lives were impacted by the city, specifically drawing upon several art schools throughout Michigan—Wayne State, College for Creative Studies, Cranbrook Academy— that boast impressive alumni. As Levin explains in the exhibition’s statement, there is a sense of hope in the work. Even if it wasn’t always part of the artist’s intent, Levin’s curation collapses some the media’s negative narrative of the city while stressing the possibility of rebirth.

“Another Look at Detroit,” a group exhibition curated by Todd Levin, opened June 26th and runs through August 8, 2014 at the Marlborough Chelsea and Marianne Boesky galleries in New York City.

Michael Pepi is a critic living in New York.