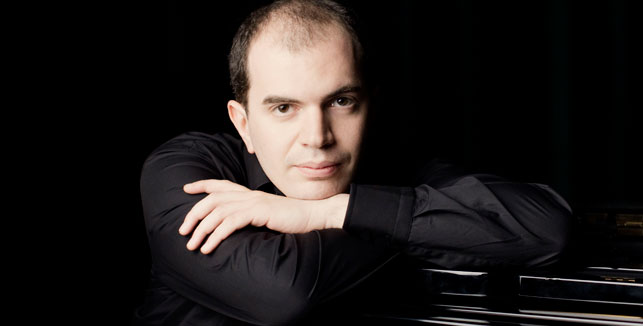 Kirill Gerstein is a Russian-born pianist who has lived in America since his youth. He must be the most famous Kirill in music since Kondrashin (the late conductor). Last night, he played a recital in Zankel Hall. His program comprised Bach’s Three-Part Inventions on the first half and Liszt’s Transcendental Etudes on the second.

This, ladies and gentlemen, is a most unusual pairing. I don’t think I have ever seen it before. It is certainly clever.

Before launching into Bach’s inventions, Gerstein played one brief piece: the Chromatic Invention III of Bartok, from his Mikrokosmos. Obviously, Gerstein was making some musicological point (as with the program in general). He went from the Bartok to the Bach without pause.

I always say that a concert hall is not a classroom. But people want to turn it into one (and often no harm comes from it).

Gerstein played the Bartok in a clear, intelligent manner. The piece was even a little jazzy, which was nice. His Bach inventions were very well defined. He obviously understands the pieces inside out. Maybe my favorite invention was the E major: ebullient, almost cleansing.

On the negative side, Gerstein’s playing was a little mechanical, a little dry, at least for my taste. I could have used more legato, and a little more lyricism. The inventions are exercises, to be sure. But they are also music (as Gerstein well knows).

In any event, I love that Gerstein loves Bach, and that he programmed these inventions. As he played, I thought of something that a violinist once told me in an interview: “Bach is the Old Testament.” It was the linkage of Bartok to Bach, probably, that brought this statement to mind.

For years, I have been writing, and complaining, about the “completeness craze,” as I call it. In fact, I have just done so for the upcoming issue of The New Criterion. The occasion was a recital by Behzod Abduraimov, the young pianist from Uzbekistan. “His program was a virtuosic one,” I wrote, “beginning with the four ballades of Chopin.” Thanks to the completeness craze,

[t]hings are played in sets, even when they are not intended to be played that way. In recent years, lots of pianists have played the four ballades, one after the other. It is getting so that to play one ballade seems almost wrong—which is absurd.

At any rate, what is needed for Liszt’s etudes? Lots of things, including supreme technique, and dynamism, and a Romantic spirit. The etudes require, if you will allow an oxymoron, a controlled recklessness.

I will knock Gerstein before I praise him: he was guilty of some tightness, and some missed notes (which are eminently excusable in these pieces), and the occasional paucity of flair. And now the praise: he was orderly, intelligent, and brave. He did not let the pieces get away from him. He was a bit of a lion-tamer, or Liszt-tamer.

Here comes a confession: I am not anti-Liszt, and would gladly hear the Mephisto Waltz No. 1 right this second—but I think it may be time for me to stop trying to like the Transcendental Etudes. I have always found them unnourishing, musically, even barren. Maybe if a pianist played one or two or five of them, instead of the complete set?

By the enthusiastic, well-pleased audience, Gerstein was called back many times, and I thought he would play an encore—specifically, a Bach invention, either a two-part or a three-part. Or maybe another Bartok micro-piece! But he played nothing. Given the Transcendental Etudes, he had probably played enough notes for one night.