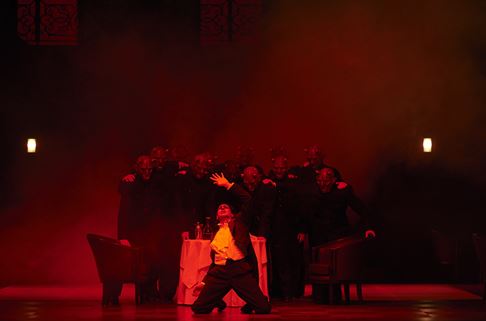 In my years at Salzburg, I have seen three Don Giovannis—three different productions, I mean. Elisabeth Schwarzkopf, the great soprano, walked out of the first one. She has since been one of my favorite critics (as well as singers).

The latest production is by Sven-Eric Bechtolf, director of theater here at the festival. I will say a few words about it.

The opera begins in total darkness—no light in the orchestra pit or anything. The curtain opens to a creepy tableau. I thought of the Addams family. The action takes place in a hotel lobby (I’m pretty sure). The entire opera—all of Don Giovanni—will take place in this lobby. We seem to be in a police state, with heel-clicking and so forth.

A naked lady emerges. She’s wearing a devil’s mask, I think. This allows me to trot out an old aphorism of mine: “Salzburg is a place where the people in the audience are overdressed and the people onstage are underdressed.”

In due course, Giovanni appears, and he smears black on his face. He’s off to pursue and accost Donna Anna.

Anna, of course, is no victim. She has the total hots for Giovanni. This used to be daring in productions; now it is de rigueur. From daring to de rigueur: That is sort of the story of opera productions.

Giovanni doesn’t kill Anna’s father, the Commendatore. Not really. He guides the knife, or sword, and Anna kills him.

To go with the famous catalogue—Giovanni’s little black book (or big black book)—there are photos. Photos of the women Giovanni has conquered. Among them, I could almost swear, is a picture of . . . Schwarzkopf! As Leporello sings the Catalogue Aria, Elvira, repulsed, goes to barf in a bucket.

Zerlina is always running off with Giovanni. Not just once or twice, not just initially, but repeatedly. If this is the case, what is her beef against Giovanni? Can the story make sense?

As she sings “Vedrai, carino,” maybe the tenderest aria in all of opera, Zerlina straddles Masetto, sexually. Then the two disrobe. I’m not sure “Vedrai, carino” is the place.

At the end of the opera, Giovanni is not dragged down to hell. If he is, he doesn’t stay there long. He’s back in the hotel lobby, chasing after maids and such. Thus is the opera deprived of its moral message. There is a new message: “Don’t worry, fellas. You can get your freak on eternally!”

Sometimes, when a musician has taken absurd liberties with a composer’s score, we say he has “recomposed” the piece. Salzburg has rewritten the story of Don Giovanni.

Bechtolf’s Giovanni is no doubt an amazing piece of theater. Seldom has an opera been so theatrical, in my experience. Every character onstage is doing something every second. I’m skeptical whether this is called for. At various points, I thought, “The director should just let them sing a little bit. Give them a few seconds off.”

In my judgment, this production is wrongheaded. It is also brilliant. You can hardly take your eyes off it. Brilliant and wrongheaded, is that possible? Evidently, yes.

The cast was almost uniformly young and physically attractive. (I attended on Tuesday night, I should say.) When Zerlina appeared in her wedding gown, she did not look like an opera singer: She looked like a model in Brides magazine. I was ready to rip management for hiring these singers on the basis of youth and physical beauty. Yet most of them sang very well—so management is off the hook.

It mattered that these two men were Italian. Giovanni and Leporello do a lot of talking with each other. Bechtolf, I believe, added more talking. These two just spat that Italian at each other, natively and engagingly.

Elvira was the German soprano Anett Fritsch, who, to me, is a discovery. She could not only slink around in her lingerie, she could sing superbly. The same is true of our Anna, Lenneke Ruiten, a Dutch soprano. And how about our Brides model, the Zerlina? She was Valentina Nafornita, a young soprano from Moldova. She, too, proved a fine and winning singer.

Ottavio was the English tenor Andrew Staples—who I bet has had better nights. He owns a lovely instrument in any case. (Why is it that Don Ottavios often come off so poorly? Even with their two arias to sing? The role can be thankless.) Masetto was a young Italian baritone, Alessio Arduini. Solid in his singing, he also boasted a mane of black hair.

The Commendatore was a crewcut Polish bass-baritone, Tomasz Konieczny. He was sturdy but underpowered. For years now, I have been fighting against amplification in the opera house and concert hall (such as I can). Nonetheless, I think that amplification of the Commendatore is justified when the gent is dead. This adds to the spookiness of the thing. There was no amplification in Salzburg’s House for Mozart (that I could discern).

Playing in the pit was the Vienna Philharmonic, led by Christoph Eschenbach. I have long remarked on a certain quality of this conductor: coiledness. He is coiled, tense, wired. He had a great night in the House for Mozart, maintaining tension all through the opera, and allowing for the necessary grace as well. This was a smart, musical, exciting Giovanni. I have never heard Eschenbach more effective.

The audience called the performers back for bow after bow. Once the applause died down and the curtain closed for good, we heard a burst of cheering from behind that curtain. The performers were celebrating onstage.