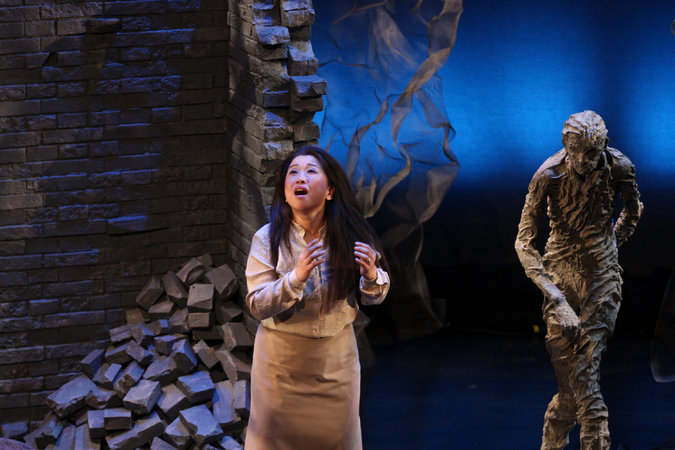 On Wednesday night, the new opera by Michael Hersch had its premiere at the Brooklyn Academy of Music. That opera is On the Threshold of Winter, a monodrama, i.e., an opera for one singer (in this case a soprano). (Aren’t monodramas always for soprano, pretty much?) We had a taste of this opera early last season, when a suite from it was performed in a concert of Hersch’s music. I wrote about this event in our December issue, here.

I should not write much about Hersch because he is a dear friend of mine. But I figure I can say the minimum, with an appropriate warning label.

He is an American born in 1971. (His opera premiere fell on his birthday, incidentally.) I wrote a profile of him for National Review two years ago, here. Hersch is not only a brilliant man and composer, he has led an interesting life—maybe too interesting for comfort, at times.

(You remember what is said to be an ancient Chinese curse: “May you live in interesting times.”)

About the new opera, I will repeat what I wrote in December: On the Threshold of Winter “is based on poems by Marin Sorescu, a Romanian (as his name tells you) who lived from 1936 to 1996. Those poems are found in a volume called The Bridge, which, as Hersch says in a program note, ‘chronicles the final weeks of Sorescu’s unsuccessful battle with cancer.’ Hersch uses a translation by Adam Sorkin and Lidia Vianu.”

The opera is thoroughly Hersch-like: intense, unsparing, honest, etc. Critics have used those words a thousand times about Hersch’s music. Sometimes the opera is beautiful and haunting; sometimes it is savage and assaultive. The score can be lean, virtually stripped bare; then it can seem semi-oceanic. No note is wasted, as usual with Hersch. Nothing is frivolous or trivial. Everything has a purpose.

How about some comparisons? Well, sometimes On the Threshold of Winter is hynoptic like Pelléas et Mélisande. How bleak and intense is it? Bluebeard’s Castle is by comparison a picnic in a sunlit meadow.

Some years ago, Ignat Solzhenitsyn conducted the Chamber Orchestra of Philadelphia, of which he was music director, in Shostakovich’s Symphony No. 14. This is a work about death (using poems and voices). Afterward, the conductor had a sit-down with his executive director, I believe, onstage. The executive director cracked, “I heard a piece like that recently”—then he sang a bit of “Happy we,” the merry, peppy, corny duet from Handel’s Acis and Galatea.

The one singer on Wednesday night was Ah Young Hong, who performed intelligently, bravely, and searingly. I apologize for clichés such as “searing.” Here comes another one: Hong delivered a tour de force. It occurred to me that Catherine Malfitano, in her prime, would have done this work superbly. Heck, maybe she could now. But Hong was just what the doctor, or the composer, ordered.

So was the conductor, Tito Muñoz, who serves as music director in Phoenix. He was alert and precise all through the opera: well-nigh immaculate (while duly feeling). His concentration was exemplary. And his eight players were obviously 100 percent committed to the enterprise. This opera probably could not skate by on less than a full commitment. You’re either in it or you’re not.

(Those eight players come from an outfit called “Nunc,” whose website is here.)

The stage director, Roger Brunyate, supplied a production suited to the work. What more do we want from directors than suitable productions? So many do not suit. The set included sculptures by Christopher Cairns: gaunt figures, walking forward, I believe, which reminded me of the Victims of Communism memorial in Prague (though those figures are less beautiful, starker, than Cairns’s).

Michael’s new opera is not a crowd-pleaser. In fact, it is something like the definition of the opposite. Yet the crowd was pleased—in that it was obviously drawn in and admiring. You could have heard a pin drop, all night. And the applause was long and loud at the end. The crowd had obviously enjoyed the opera.

“Enjoyed.” Let me tell you a couple of stories—a couple more, I should say. At intermission, I spoke with a music-scholar friend of mine who once heard Vladimir Ashkenazy conduct the Shostakovich Fourteenth. Later, he said to Ashkenazy, “I enjoyed the performance.” Ashkenazy went wide-eyed and said, “You did?”

A week or two ago, I said to a China scholar that I had enjoyed his biography of Mao—“though ‘enjoyed’ is a funny word to use about a book that chronicles such monstrousness.” He knew what I meant.

It has often been said, including by me, that a Hersch premiere has an air of importance. Something important is taking place. So it was on Wednesday night—maybe more than ever, given the length and scope of the work. The composer and I are friends, yes. But what I say is still true! As all may discover for themselves.