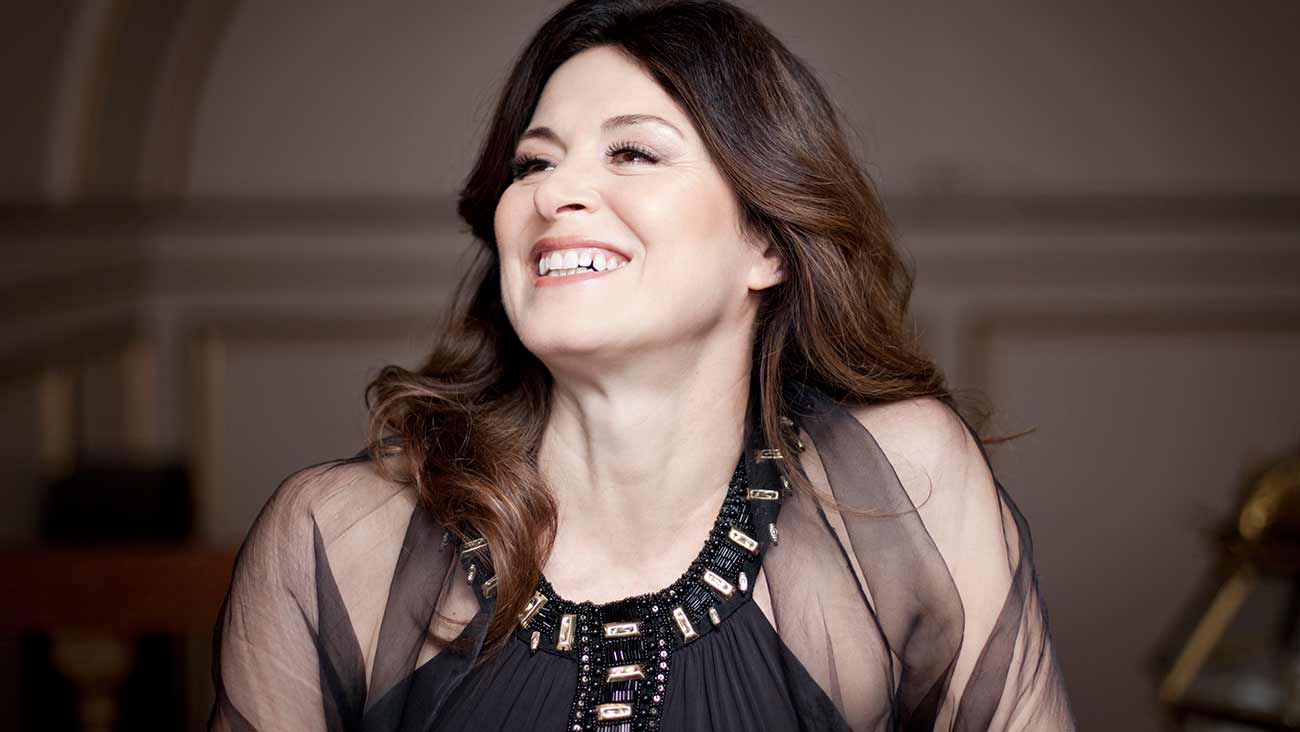 Anna Caterina Antonacci sang a recital in Alice Tully Hall on Thursday night. The hall also turned into an opera house, as I will explain in due course.

Antonacci is an Italian soprano who has established a career in French music. Zino Francescatti, the late violinist, was a Frenchman. Roberto Alagna, the tenor, is a Frenchman. Anna Caterina Antonacci, however, is an Italian who, by choice, is semi-French.

I have called her a soprano, and she calls herself that—but she is a ’tweener: a singer who dwells between soprano and mezzo. This can be a nice space from which to work.

When Antonacci took the stage on Thursday night, the applause for her was long and loud. This surprised me. She is well-known in Europe, but I didn’t realize she had a reputation here in the States.

Her program was all-French, and the first half brought five composers: Berlioz, Debussy, Duparc, Poulenc, and Ravel. To my ears, Antonacci does not have an especially beautiful voice. It is an interesting and useful voice. It is rather bold, forward, and pointed. You would not think it particularly suited to French music. This repertoire depends a great deal on subtlety and delicacy.

Antonacci depends a great deal on musicianship—which she has in abundance. She also has a solid technique. Only rarely did her intonation waver in this recital. Furthermore, she is a “singing actress,” as they say. You can tell this about her even in songs. She reminds me of America’s own Catherine Malfitano, and, as I have said in the past, there is a taste of Callas about her.

I could go over the first half of her recital song by song, but maybe I will make just a few remarks. One or two songs lacked beguilement. Beguilement is almost the French composer’s bread and butter. But every song had a case to make. Every song was sung with care (though not intellectualization, thank heaven).

The first half ended with Ravel’s Kaddisch, which may be thought of as a Hebrew scena. Antonacci had a bit of a “spread” in the voice. But she sang this piece with power, emotional and otherwise.

Accompanying her was Donald Sulzen, an American pianist who lives in Munich. He played knowledgeably and confidently, all evening long.

The second half was given over to an opera: La voix humaine, by Poulenc. This is a one-act, one-woman opera, based on the play by Jean Cocteau. Poulenc composed it in 1958, a couple of years after his masterpiece Dialogues of the Carmelites. There are touches of Dialogues in Voix.

In the latter opera, a woman speaks on the phone to the lover who has just left her for someone else. The opera depicts the woman’s disintegration.

I did not really review the performance, mentally, as Antonacci sang, and acted. I took very few notes. I just listened and watched. Antonacci was superb. She was Malfitano-like indeed, and also Callas-like. I’m trying to avoid the cliché “tour de force.” It’s hard.

From what I can tell, Antonacci did not put a foot wrong or a note wrong. There was no scenery-chewing whatsoever. No overstatement. She understands that the power lies in the words, music, and situation, and she brought it out with great intelligence, musical and theatrical.

Allow me to quote from a review I wrote in 2005. Antonacci had just sung the title role of Gluck’s Alceste at the Salzburg Festival. I said I could pick on her a little, and did. But

she is the kind of singer who seizes you, and whom you root for. Her singing was packed with emotion, though it did not offend Gluckian taste, and she involved you in every note and thought. She sang as though it mattered—and that is not encountered every day. I guess what I could say, more succinctly, is that there was an honesty about her singing. A rare and priceless quality in music.

So it was on Thursday night.

I believe that Poulenc’s title, and Cocteau’s title, has more than one meaning. “The Human Voice” is the right title because we hear just one person’s voice, one side of a phone conversation. But the woman is Everyman too, or many people: she represents the common predicament of being hostage to romantic love, and killed by it.

Incidentally, Antonacci held the receiver of the phone to her ear for almost the entirety of her tour de force. I myself would have been tempted to use a modern headset.